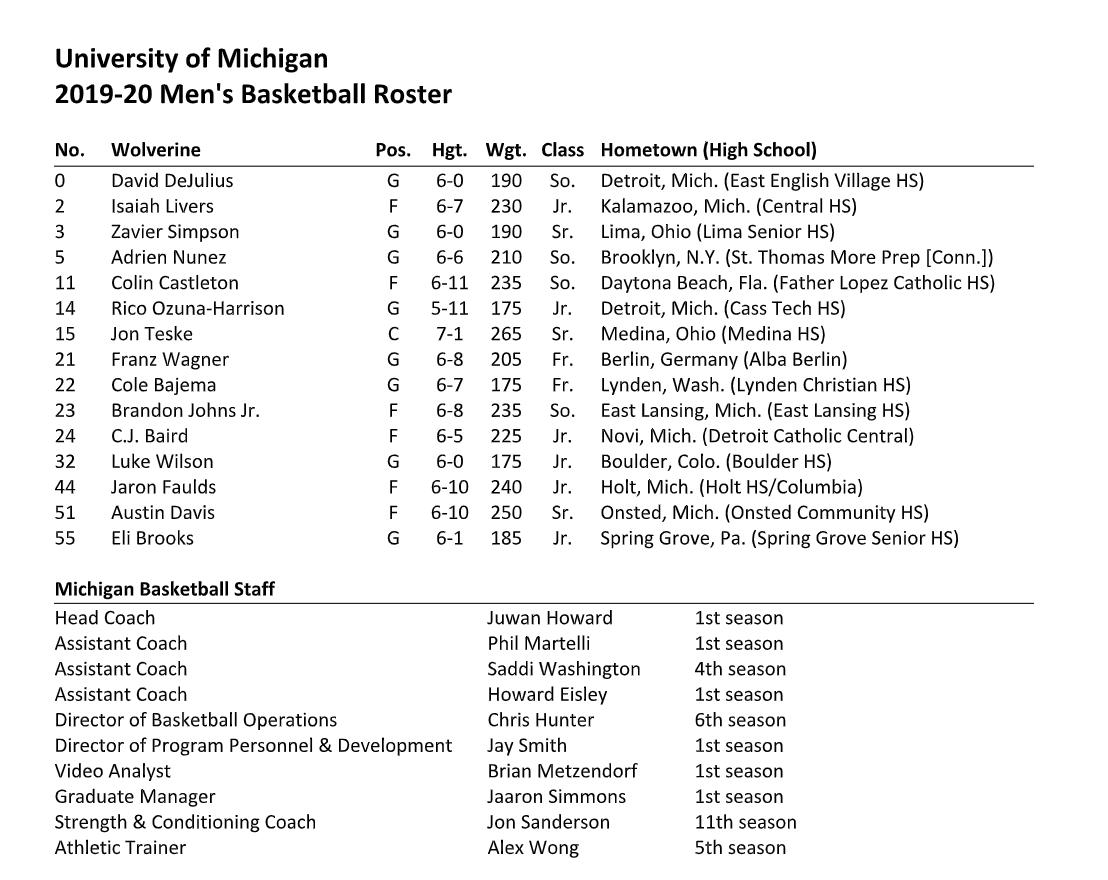 Get Cole some pizza! I viewed myself as skinny as hell in high school and I was 6’2" 185lbs.

Man. I thought Bajema had put on more weight before coming to Michigan. I’m hoping that is a pretty old number.

Agreed re Bajema. What happened to that report that he was suddenly heavier than 200? (I forget exactly, but he was reported at a number starting with 2. Coulda been erroneous, certainly.)

to late for Romeo Weems to come to Michigan? I wish:frowning:

Agreed re Bajema. What happened to that report that he was suddenly heavier than 200? (I forget exactly, but he was reported at a number starting with 2. Coulda been erroneous, certainly.)

I don’t really follow the weight analysis game (seems a little silly to me) but wasn’t that Franz Wagner who cracked 200? I don’t remember anything about Cole but I could be forgetting.

The Wolverine posted this https://michigan.rivals.com/news/michigan-basketball-cole-bajema-lights-it-up-in-practice-nba-updates on July 7th stating that he was up 20 lbs since his commitment to UM.

Maybe he weighed a svelte 155 lbs when he committed.

Caris was probably even skinnier

I thought there was an update from Cole’s dad awhile ago saying he was up to 185/190.

I’m guessing it’s an old number for the following reasons. 1. This Rivals ranking is from August of last year and lists Cole at 6’7 175, the same as the updated roster. 2. I know that Cole’s strength coach back home had some kind of connection with Coach Sanderson and Cole was working on strength training at home, so I’m guessing the Balas story stating that he had put on 20 pounds since committing is fairly accurate. So, and this is just a guess on my part, and so is totally meaningless, I’m guessing Cole is in the 190-195 range. Nevertheless, I still expect Cole to gain additional strength and become acclimated to the college game and become a factor as the year progresses. We’ll see.

Don’t care too much about Bajema’s weight as long as he can score. I’m not sure finishing through contact is really going to be his game whether he weighs 185 or 205.

It’s easy to manhandle a 175 lb person. You’ll notice that I couldn’t even refer to someone of that weight as being a man. It’s counterintuitive. Fortunately we’ve been reminded that Bajema has put on weight and is likely quite a bit heavier now.

In my day a guy who wanted to stay on the court had to weigh at least 200 lbs. That’s the only chance a guy had if he hoped to remain on the playing surface. If a 175 lb guy ran out there he’d be thrown off of the court and onto the grass surrounding the court. Not in a malicious way or even intentionally, but merely a function of a tiny guy coming into contact with normal-sized guys.

So you’re saying he’d be literally “bounced” off the court?!?