Pretty sure Michigan is locked into the 8-9 game at noon on Thursday against the winner of Thursday’s PSU/NW game.

I saw a chart that said there was a small chance of Michigan moving up to the 7 seed. But it requires OSU beating MSU.

Okay – one exception. I believe Purdue could fall to the 8 and push Michigan to the 7 if it goes 0-2 and Michigan beats Iowa.

I would love nothing more than to knock out Crean!

Wanted to see what everyone predicts for the Big Ten Tourney. http://bball.notnothing.net/big10.php?sport=mbb that website helps make it easy to show it. If you would like show a screenshot of what you have. This is mine: 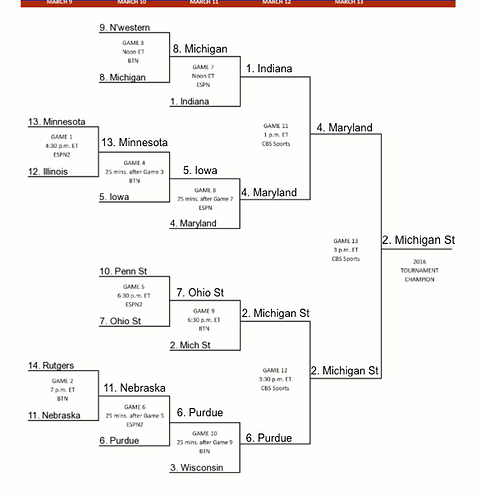 Honestly that bracket is set up nicely for us to make a deep run, if we come to play we have a legitimate shot to make a run. I’m one of the Hoosiers biggest advocates as a dangerous team come match but their due for some upsets and their style lends itself to an upset. Let us take care of business. Then we could line up with Maryland or Iowa. These just seem like nice match ups for us.

You guys think one win meAns we’re out? You think we need two? If we beat Iowa we are a lock
Imo. I actually think we got a shot even with only win. Especially if we lose tight ones andlook good against Iowa and Indiana. To me, to my eyes we are a top 68 team who is tourney worthy. Even if it’s in a play in game. Our rpi might not be there but put us head to heAd against some of these bubble teams in the sec, pac 12 and the mid majors and I think we are better if they played. Wish the numbers said so. Like I said earlier I’d rather squeeze in the tourney as like an eleven and be in a play in game then the eight nine. Trying to make a run.

How lovely would it be if we can beat Iowa get in and then suddenly our shots get hot just for a few weeks. Making a run into the second weekend. Ahhb I can dream.

Let’s just all make sure we sign Kyle young. Everybody flood his and coach b’s email to make sure this deal is completed properly.

I will be rooting for Penn State. They need to stay in the top-100 RPI for us. I like our matchup against them better than Northwestern in the 8/9 game of the Big10 tourny. If we can get that win, it could give us another “top-100” RPI win.

Yeah… Michigan really needs PSU to win out IMO. Wins over NW and Illinois should keep them in the top-100 even if U-M beats them in BTT.

It’s hard to see a scenario where Michigan makes a run in this tournament. With their lack of consistency and inability to maintain a high level of play even for 40 minutes. A game against Indiana in Conseco? That’s real rough.

In a one-off random game, Michigan could beat anyone in the big ten, except for maybe Michigan State. They have not shown the ability to string together multiple impressive games, though. If somehow they did beat IU, I would not expect them to win the next game against a quality opponent.

Last year we drew Illinois in Chicago and this year it will be Indiana in Indy if we win the first game.

Hopefully JB lights a fire under them – I know in the past he has downplayed the BTT a bit (maybe to save legs for the postseason) but this season there might not be a postseason if they can’t make a BTT run (NIT doesn’t count). So, “queme los barcos”. Treat the BTT as a chance at redemption, not a distraction from more important things. Don’t go out with a whimper.

Better to leave it all on the court in Indy and come up lame in the NCAAs than get punked once again by Yogi and win the NIT.

Just give us another shot at the hoosiers. That’s what I want most.

We cannot play at that pace. I’m not sure why people want that matchup?

So I was examining scenarios taking into account the day’s games. This is whats left.

And then when we remove games that I’ll call a “foregone conclusion”/are irrelevant/our game we have:

Here’s some notable scenarios in which we end up in the 7th seed:

So out of the 16 possible outcomes of these 4 games, 8 of them result in us as the 7 seed.

Correct me if I am wrong. If UM beats Iowa on Saturday, both teams have the same record. One will have a record of 4-8 vs top 50 RPI teams and the other has a 5-8 record. However one is ranked 58 in the DAILY RPI rankings and the other 16. One is a lock for the tourney the other is a bubble team. Makes no sense to me.