Let’s give it up for Zak Irvin! Played through the injuries, doubts, and insults, and came through big when it counted.

Huge game. 2-3 from 3, including that huge 3 as the shot clock was about to expire. I love him taking that shot.

He’s a great leader. It’s been awesome to watch him turn it around and step up as a defensive stopper. Well deserved Zak Irvin!!!

In many ways he has been as critical as Walton in this string. His defense, desire and heart has been pure fuel.

Named to the all tournament team along with Walton.

That 3 as the shot clock expired was like Walton avoiding the foul on that pump fake three against Purdue.

Both absolutely huge and a big factor in winning both games.

If he continues with this type of shot selection and taking the ball to the hoop more frequently — real solid contributor.

Huge, huge game from him. Glad to see it.

Being at the past 3 games I saw Zach locked in defensively. Even in the last 2 minutes of the Wisconsin game. Impressive play by the senior.

The last five or 6 games are the best I’ve ever seen him play .

Zak had a great tournament. In four games, he played 156 minutes, shot 35% from 3 and 70% from 2, averaged 7 rbs with a 2:1 asst/TO ratio. And he played great defense against bigger guys like Hayes and Swanigan and smaller guards off switches. And of course he had the big moments against PU and Wiscy. He’d been playing really well for a few games before this, but seems like he’s really on it now. Which obviously worked out pretty well for the team and bodes well going forward.

First, I want to thank bebopson for starting this thread. It’s heartening to see so many people come out in support of Zac Irvin, an exceptional young man. I’m putting this here as a reply to Umfansaretheworse because I agree with with you, U. Zac Irvin came in as a very highly touted player out of Indiana. Michigan fans were ecstatic when he committed, then signed with Michigan. Expectations were off the roof. Throughout his career here at Michigan, Zac has worked so hard, through injuries and illnesses (the flu this year), to transform his game and become a complete player. Yes, I do believe the flu effected his supposed “slump” this year. And, yet, he was criticized. I LOVE that Derrick Walton’s comments about that criticism have been made public. In my humble opinion, it WAS a bunch of BS, as Derrick said. Through HARD WORK, and yes, talent, Zac has become a player who can handle the ball, pass it, take it to the rack, shoot that deadly jumper going to his right from 15-18 feet, and defend. And boy, can he defend. Coach B has known Zac for the past 5 or 6 years, first as a recruit, then as a young player finding his way on a great team, then with leadership expectations placed upon him probably too early. He has watched Zac grow and develop, suffer setbacks as a result of those injuries, and come back to work even harder. Zac has played the two, the three, and the four for this team, and he has always given great effort. He wants to be the best he can be, for the TEAM, and he has been willing to WORK for it. And Coach B has coached him, and supported him through every trial and travail. Zac has been criticized as has Coach B. Those who know me understand I think that criticism has been somewhat unfair. Have I personally ever questioned Zac myself? Yes, I have, not in public, but I have questioned decisions he’s made. Funny how much easier it is sitting on my easy chair at home than it is in the heat of the battle. But quietly, secretly to myself, or to my great friend, another HUGE Michigan fan who loves Michigan Basketball as much as I do, I have, on occasion second guessed. Have I ever questioned Coach B? Yes, but not on this. And of course, whenever I question Coach B, I’m proven wrong anyway. On this issue, whether he should have sat Zac down, not started him, brought off the bench, as some were calling for 3-6 weeks ago, I trusted Coach B. I am so glad that Coach B is a man of conviction. I’m so glad that Coach B, knowing Zac as he does, remained loyal to a young man that he KNEW had this in him. Coach B has known Zac for a long time. He has coached him in every practice for the last four years. He’s coached every one of Zac’s games as a Wolverine. He’s talked with Zac. He’s counseled Zac. He’s listened to Zac. He’s watched this young man grow, as he has Derrick and all the others. He KNOWS Zac Irvin. NEVER did Coach B need some message board jockey to help him make decisions regarding Zac Irvin, or for that matter, any other player in the program. Thanks Coach B. Thanks, Zac! I don’t know if you’ll play after college. I’m certain you’d like to. I dearly hope that works out for you. But let me just say, you are a young man that EVERY Michigan man (or woman!) should be proud of. You are articulate and well spoken. You are a thinking man. With your Michigan degree there is NOTHING in this world you cannot do. If I owned a corporation or were a CEO, you are exactly the kind of young person I would look to hire. If I were an AD looking for a young coach, you, along with Derrick Walton and Andrew Dakich, would be among the first I would contact. You have a great work ethic, you are resilient, never giving up no matter the hardship or difficulty. You are a leader, but you are also a team player as well. You are willing to adapt your role for the good of your team. You are, along with your GREAT friend and teammate, Derrick Walton, among the true LEADERS and BEST. I wish you everything good starting this week and throughout your lifetime! GO BLUE!!!

Loved this quote from JB: 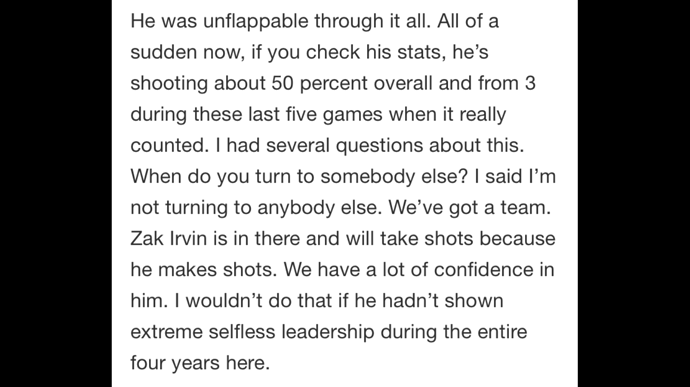 I’d like to see him slash more next game. We aren’t going to shoot like that often. The whole team needs to try and get to the rim more next game. Just like we did in the big ten tourney.

We need a nice mixture of inside out. Also we didn’t fast break at all. Partly as they missed very few shots but I’d love to see our break again,

I’d like to see him slash more next game. We aren’t going to shoot like that often. The whole team needs to try and get to the rim more next game. Just like we did in the big ten tourney.

We need a nice mixture of inside out. Also we didn’t fast break at all. Partly as they missed very few shots but I’d love to see our break again,

The off the dribble between the legs threes that he made today are suddenly good shots because he made them? Those are the exact shots people complained about a month ago. He didn’t get to the rim at all today. He just made shots- and clutch ones.

Exactly. Some posters went so far as to chart each shot in a given game and classify the shot as good or bad (with the benefit of hindsight, of course). Many of his shots today would have fallen in the “bad” classification.

Irvin was in a really bad, prolonged slump. To his credit, he stuck with it, continued playing great defense, and he’s shooting better now.

I didn’t see him shoot one of those today if I recall. I didn’t love the late three he hit but that was off the catch and shoot if I recall.

Also didn’t I say he needs to get to the rim? Plus were talking about the last five or six games. He’s gained confidence and gotten out of that slump so he can now hit tougher shots because he got back to what works and his confidence is high Most his looks today were still nice looks. A few kick outs that were open.

Props to Zak either way, this last few weeks are the best I’ve ever seen him play. He’s really won me over here.