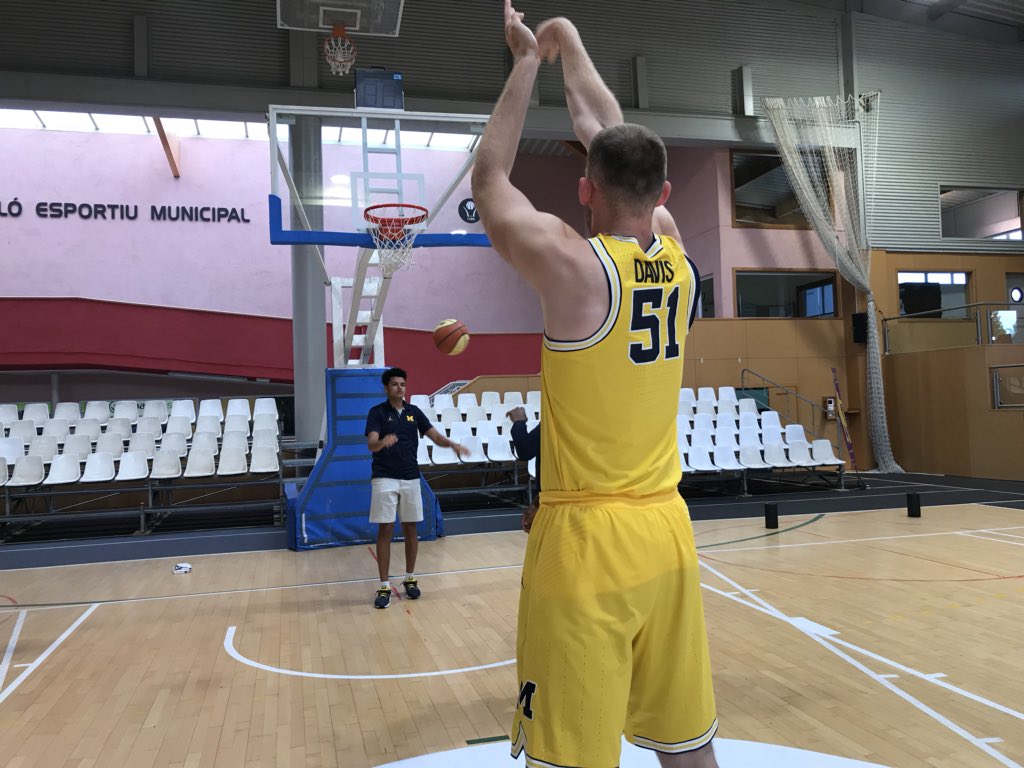 I usually try to just stay silent if I do not believe a recruit will pan out. From the beginning I have been completely silent about Davis. I must now confess, the kid is proving me dead wrong. He has outstripped my expectations of what I thought was possible ten-fold. At minimum he is going to contribute to our team and I never thought that would happen and it is likely he will actually be competing for starting minutes.

Although, I am, unfortunately, because of his good play, simultaneously forced to be less confident in my evaluations

If Davis’ defense comes along and he keeps fouls to a minimum he will become a valuable rotation player. JB needs to get him as much run as possible in the non conference part of the schedule. I think his ability on offense may surpass Teske. I’m also impressed with his fee throw shooting.

Do you guys think the shortened shot clock hurt or helped a guy like Davis? I can see arguments both ways.

The thing I like most about Davis is that he knows where he’s supposed to be on both ends of the floor…whether he’s effective in those spots is probably a different story.

IMO Davis will be the surprise of the year.

I think finishing inside is something that he has to solidify. He’s getting the ball in good position repeatedly but failing to convert too often. He looks to be rushing his moves/shot.

As of now, he looks rushed with his back to the basket. He’s a much better “garbage guy.” He’ll have a role and that’s a good thing. I like his game and he’ll save a bunch of possessions because of his hands and rebounding.

Like Dylan mentioned, his biggest question mark is the defensive end. He has to be able to defend the pick and roll. I don’t they’ll defend the same way as last year. Neither Teske or Davis have the foot speed Mo had, they’ll figure something out.

I don’t care how he plays with his back to the basket, I would prefer we almost never post up

Dylan, thanks for doing these break downs of the film. Just highlights don’t tell half the story.

If he can perform half as well as the last guy who struggled to convert–Jordan Morgan–I’ll be very happy.

JMo wasn’t that bad and his defense was outstanding. Davis has work to do defensively.

J-Mo likely is Davis’s ceiling. Davis has
more motor and a couple of inches taller but J-Mo played a lot smarter.

JMo had a great motor. Davis needs to have that. It’s the one thing Beilein has been looking for.

I think you (many of you) are comparing redshirt sophomore Davis to redshirt senior Morgan. Jordan Morgan as a sophomore was not that great.

Morgan was one of the biggest surprise as a red-shirt freshman.

JMo did get good positions both defensively and offensively, IMO, mostly because of his brain than his motor. But either way, Davis is not at the level yet

I disagree with you on Teske’s footspeed. I think he’s quicker laterally than Mo and a better defender.

Yeah, Mo showed improvement on the defensive end down the stretch but I felt like Teske was easily a better defender than Mo all of last year.