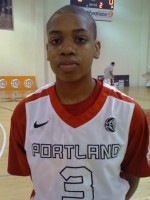 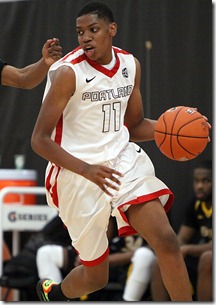 Kameron Chatman made the trip from California to Ann Arbor over the weekend and received an official offer from John Beilein and his staff. Chatman was in for Michigan’s College Practice Camp on Saturday, and then took his full unofficial visit with...

According to Sam Webb on Monday’s Michigan Insider Recruiting Roundup, the thing that “happened” to stop the MSU visit was that Chatman’s dad got a call from a State coach after they arrived at DTW with an offer for them to visit EL. Sam said that Chatman’s dad said he understood the game State was playing, and didn’t think it was right for them to decamp to EL based on this first (opportunistic) contact.

Did msu really think the Chatmans would play this ‘game’ of dissing Michigan?

Well I’d still much rather have Looney (don’t want both) but Chatman seems far more likely to commit at point.

I certainly wouldn’t be unhappy with Kameron though. Having a 4 with PG caliber handles would have it’s merits. Just hope he can improve his shot.

Id much rather Chatman than Edwards…

Definitely Chatman over Edwards. I’m high on this kid… and when I say I kid, I mean it… he looks like he’s 13. Oh well… kid has game.

Yeah, a little classless on Izzo’s part. I doubt they even knew much about Chapmon without trolling our recruits.

I would be very happy if Chatman decided to commit. I would be curious to see if he could maintain his rebounding ability in the Big Ten. Would probably need to add some weight. But I wouldn’t say no to a guy who goes at it on the boards.

Id much rather Chatman than Edwards.......

On this gentlemen we are in agreement.

Yeah, a little classless on Izzo's part. I doubt they even knew much about Chapmon without trolling our recruits.

I don’t know if I’d say classless. I’m sure they didn’t know Chatman’s exact schedule, but I think it’s a bit pathetic to call him so late in the weekend when it’s been publicly known for a bit that he’d be in the state. But it’s really a no lose situation for them. Before they called, he wasn’t interested. Worst case scenario after you call is that he’s still not interested.

I still haven’t watched any video on Chatman, though from what I’ve heard, he could be a great find at this point in the recruiting process.

And the MSU part of the story… seems like something they would be able to do about 5 years ago but not anymore.

Well I am not sure of Chatman’s ethics or the financial situation of his family, but if he is looking to help his family Oregon could fit that bill. (remember Malik Hairston)

Well I am not sure of Chatman's ethics or the financial situation of his family, but if he is looking to help his family Oregon could fit that bill. (remember Malik Hairston)

Finally some footage of Chatman in action

Here’s footage of recent Michigan offer Kameron Chatman at the Rose City Showcase last weekend. Chatman led his ICP Elite squad to a championship win over I-5 Elite in the event. Thanks to Tim Brown of Oregon Live for passing along the footage....

Interesting tidbit on the contact between MSU and Chatman’s dad. I would also not go so far as to call it “classless” by MSU, but it does make them come off a bit late to the game. I respect Chatman’s dad’s sense of etiquette.

Question, though… Jalen Brunson is possibly coming to MSU’s camp next weekend. Reports are here that we hope he visits A2 while he is in the state visiting EL, and that our offer would come immediately upon that visit. Is this different from Chatman’s situation because we wouldn’t be sweeping in with a last second call to Brunson’s dad, but rather will have had something arranged beforehand?

Disregard, Dylan and Steve helped differentiate this in the blog section. Thanks!

Would be REALLY difficult to get Chatman off the West Coast. Per his twitter…
“Is michigan still high on your list would love to see you in maize and blue?”
“Wuldnt say there leading but had a great visit and i do like the coaches”