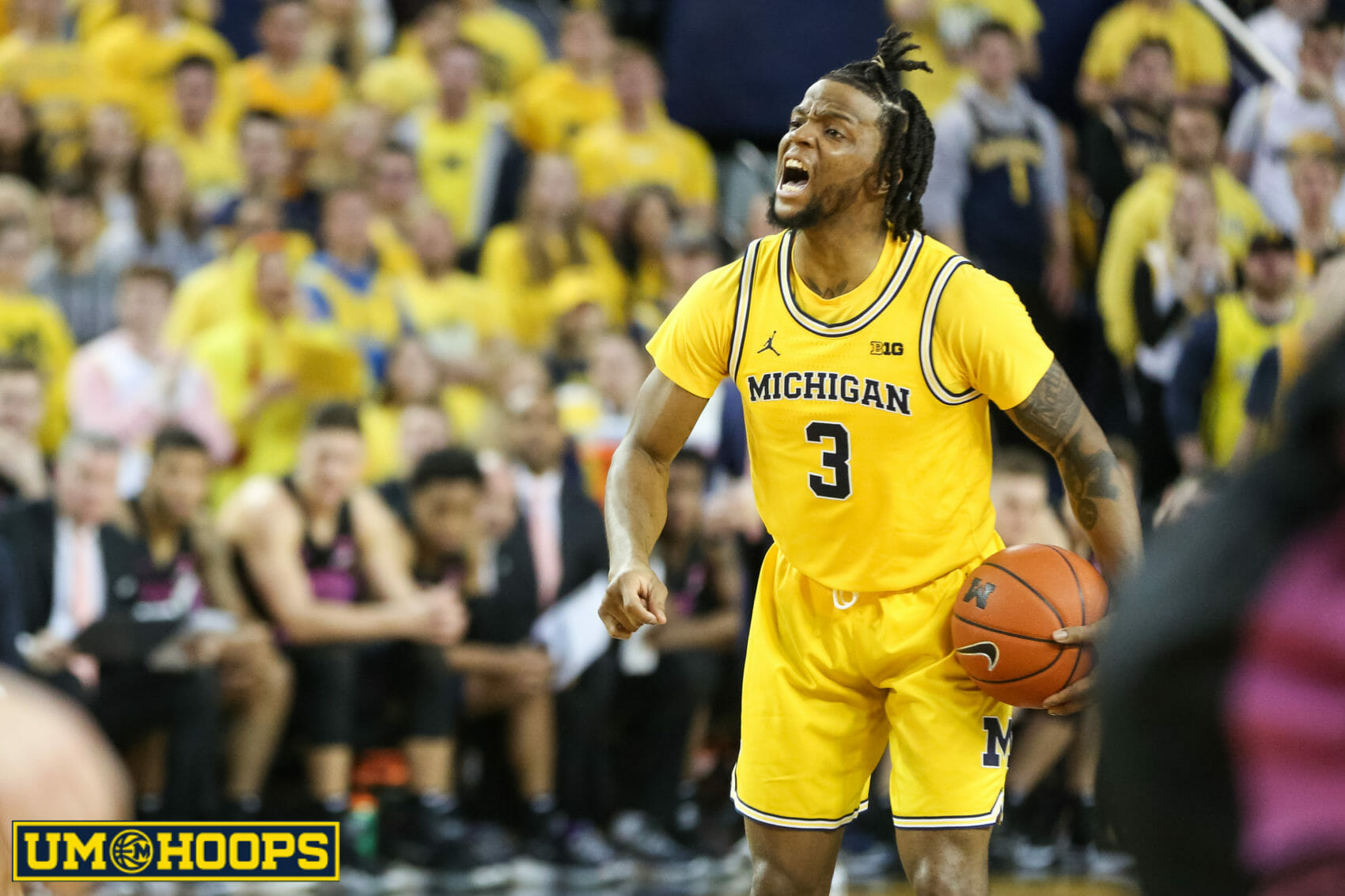 Michigan’s offense had miraculously kept its head above water on offense without Isaiah Livers. The Wolverines were ranked 2nd in the Big Ten in offensive efficiency and first in effective field goal percentage despite playing four of their first six...

[Davis’s] upside is just so limited though that it might make a lot of sense to go to Brandon Johns as the backup five down the stretch when Isaiah Livers returns to action.

I would agree a couple weeks ago, but it’s crazy to me (and you touched on it in the recap a bit) how often Brandon Johns is just standing around or bumping into people in places that make absolutely zero sense on offense. It just kills the spacing and flow.

Yes, he definitely does as a four. His positioning his bad, he passes up shots and just doesn’t add a lot. As a five, I think you mitigate some of those issues.

I think (and I’m sure this was implicit in your statement) that it really just depends on the game. Davis was getting murdered on D against Iowa, but seemed totally competent today. I don’t have faith in either against good post up centers, but I do have to admit that despite losing Stevens for some frustrating open shots, Johns usually did force him into some tough shots if they were 1v1.

Rough game. Credit to Penn St. They were clearly the better team. Kind of surprised PSU only scored .96 pts per possession. Seemed so much higher with their impressive shot making.

Michigan on the other hand, was dreadful shooting the ball. Hard to be that bad where basically no one can make a shot. I think Juwan probably should have done more to reign in Simpson who I thought played out of character but it didn’t help that no one else really offered much in the way of creating offense.

Probably should have tried posting Teske more and seeing if that would have worked. Just have limited options at this point.

Hopefully Livers can come back soon but I don’t think he can single handily fix all their problems. He will help a lot but other guys have to pick up their play too.

Got to start winning games soon because this season can get away in a hurry. The conf. Record could really go south if their not careful.

My goal for this team before the season was to just make the tourney and it would be a shame for that not to happen.

Hopefully Livers can come back soon but I don’t think he can single handily fix all their problems.

He won’t fix everything but if you made a list of Michigan’s most pressing issues, he would at least address most of them.

Oh and @umhoops do you think based on the efficiency of Teske’s post ups (which are 95th percentile according to @gobluemd16) that this should be an option that Michigan looks to more given issues with shot creation? I usually have a hard bias against post ups because of their usual efficiency not being great, but even I have to admit that there were times where I thought they should have thrown it down low to Teske when he was matched up with Harrar.

edit: Here are the numbers

I’m not sure about the 2nd number.

Right now, Teske is 8th in the league in post up plays per game. Don’t think there’s anything to lose by going to him a few more times in those spots but you aren’t giving him 8 post-ups per game like Garza. I think the upside is limited because the passing numbers out of post ups aren’t really great. He’s shown flashes in that area but not consistently.

Interesting. Thanks for the response.

Possibly am misinterpreting this, but the data comes from here:

What the hell did I watch tonight? Hopefully there’s some sliver of truth to the saying ‘its always darkest just before the dawn’ because this is a pretty depressing low. I have no idea how this same group was able to beat Gonzaga. (Well, i know we had Livers then, but we barely had Wagner.) I just don’t get it. I think Dylan is right, Johns just simply isn’t ready. Hanging on to the hope that Dylan’s right in the other regard, Livers back solves a lot of problems. The ability to make a 3 point shot being one, but the less reliance on others like Johns and Davis.

I think they just shot the lights out that week. Ran away from teams early and made enough plays down the stretch to maintain leads until the other team wilted.

It seems Johns is more ready than Wagner.

Have to disagree here. If you are basing that off the box score from last night sure. But Wagner is one of the few players who is regularly in the right spot for Michigan. His length and positioning on off ball defense are superb and regularly causes disruption to the other teams offense, he is one of the best cutters I’ve seen in a long while, and he generally takes good shots. His one issue seems to be when he puts the ball on the floor to drive, but other than that it’s just misses or makes with him. Same cannot be said for Johns. One thing I would like to see is more post ups with Franz. They went to it once and he had a great pass to Simpson for a wide open 3.

I have not read through any of the above post (sorry) so forgive if I regurgitate some perspective. Any game where X Simpson has to take 23 shots will probably be a game the team will loses. Also, just look at the one player on Penn State no one knows who scored all 18? of his points in the second half and no outlier for Mich performing the same.

I’m not much of a “take” guy, but Brooks has been Michigan’s best defender this year. Simpson has taken a step back, particularly off the ball… I can’t really blame him though, the offensive burden he is taking on is immense and, besides the Iowa game, he has basically played every minute the last 5 Big Ten games.

Losing track of Myreon Jones in off-ball situations twice last night (one time was definitely on X, the other seemed like away-from-the-ball screen confusion between X and another defender) seemed very out of character.

Tough for UM to not have Livers on what would otherwise be a very winnable home game … Stevens is too much for Wagner; Johns simply kills their offense and really isn’t offering that much more on D. Johns is certainly better than last year, but he’s just not ready to be relied on in any way.

Not a ton to take away, but I do think it’s worth looking at how poorly Howard managed the end of the game, keeping Johns on the court (instead of DDJ) and blowing chances to put PSU at the line for 1-and-1s with 4–5 mins left. The team’s poor performance on the court was probably going to overwhelm any amount of tactical acumen, but you can throw Howard into the list of poor performers on the night.

As I “show my work,” Simpson features prominently here:

Michigan not making shots was the primary reason why it lost to Penn State, but uncharacteristic miscommunications and botched switches on defense led to many open looks for Nittany Lion three-point shooters. https://t.co/WTnSj10mPn
5 Likes
next page →