Huh…you could have given me a lot of guesses and I wouldn’t have picked Purdue at the top of that list. The others make sense. I wonder what Trice’s win/loss record was at those places.

IIRC Wisconsin has a very poor record at Mackey. And through a glance through previous years they last won there in 2014. I think Michigan fans don’t look at Mackey as intimidating cause we have a good record there but a few B1G fanbases feel towards Mackey how we feel towards Kohl Center

Mackey is definitely one of the more intimidating venues in the league.

Rutgers makes sense for Trice because they struggled there a fair amount.

I am mildly surprised to see Michigan at #5. I guess the qualifier is “at full capacity.” Full Michigan crowds do bring it. There are just too many games at less than full capacity.

I’m pretty surprised at Michigan there too tbh. My brother and I had an awesome thing going of trying to get to an away Michigan basketball game or two per year that’s kinda died off a bit in the past 3 years or so, but we’ve hit almost every big ten team (no Nebraska or Rutgers). I would probably rank this something like:

I’m sure Rutgers and Nebraska would both be pretty high there. Obviously stuff like “was the team good and was Michigan good when we were there” alters things a lot. But to be honest, even when Michigan is good I rarely find Crisler to be an intimidating atmosphere. If it’s a close game the crowd gets into it at the under 4 or during big runs, but the maize rage is, in my opinion, one of the least organized and least effective student sections in the conference. And the non-student fans in the lower deck are just brutal in general.

I have no strong feelings about the Maize Rage either way, but ever since undergrad my biggest pet peeve has been the seating at Crisler. It’s absolutely criminal how many small the student section seating in the lower bowl is. Even in football our fanbase isn’t known as an overly intimidating crowd (more of a wine and cheese group) and I think a lot of that comes from the non student sections. As the basketball team gets better and better, you have to let more students sit in the lower bowl and set the precedent for the whole arena that we’re going to stand, be loud, and be intimidating.

I am 74 years old, haven’t been a student in over 50 years, and am definitely a “wine and cheese” guy, but I absolutely agree Student attendance and student sections at games definitely makes a huge difference in the atmosphere of college basketball games. I would LOVE to see the student sections expanded at Crisler! 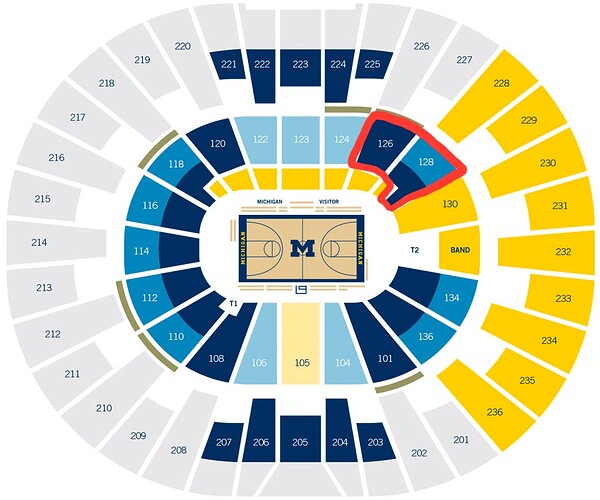 At the bare minimum, the highlighted two sections needed to be converted to student sections years ago.

I will maintain the the maize rage people need to do some work themselves too though. Only the middle bleacher sections actively participate in the games, doing the chants and stuff. It’s not just a location problem because even the side sections in the lower bowl bleachers just kinda stand there watching the entire game.

Basically, something like this (you can see I removed the 4 upper deck sections that were isolated and moved two to the lower bowl and two right above those new lower bowl sections) would unify the students in one general area much more than they are now despite it being in two decks and I think it would assist things greatly. 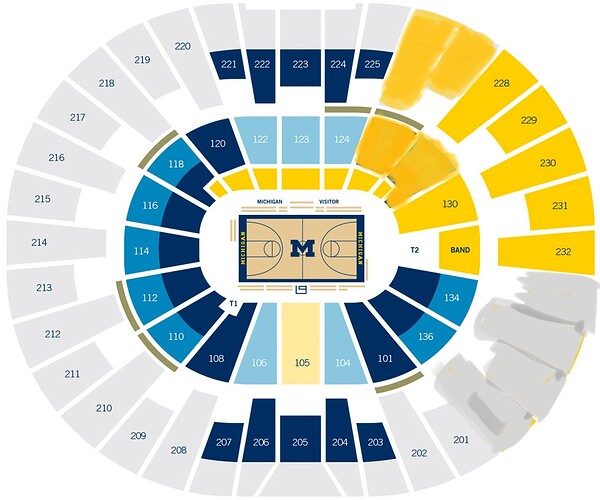 No general population sections were removed, just moved around. Buuuuuuut, the money talks more I guess

I said it years ago and it seemed dumb at the time given where um was in basketball but um messed up not putting boxes in during the renovations. Could have funneled a lot of the high dollar lower bowl people into those and expanded the student section down there and really improved the environment. It’s how msu does it.

I believe they did though? Maybe not “boxes,” exactly but those club sections would seem to serve the same purpose re-money making. There’s not really a place to put actual boxes given that Crisler doesn’t have the usual big overhang between decks. 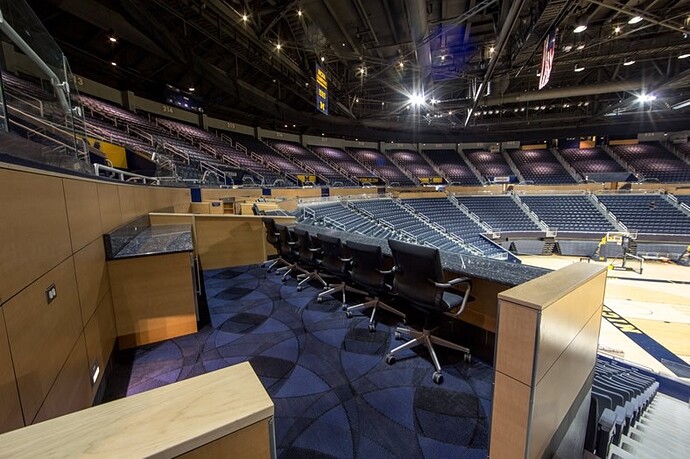 They did put in premium seating at Crisler.

That may be the most pathetic premium seating I have ever seen. That’s not the type that’s going generate the extra revenue needed or attract lower bowl people to leave their seats and expand the student section.

Wouldn’t it be so wonderful? I agree wholeheartedly that wine-and-cheese people – present company excepted, @silverblue – can and should be put in boxes.

I’m not really sure what you want given the stadium’s core construction. They can’t do a huge suite with a back area because the concourse bumps up right to where that would be. Due to the way Crisler was designed, these areas need to be level with the concourse instead of above it (no overhang between decks). This is exemplified by the fancy club area that Crisler does have butting into the concourse a large amount and forcing it to go around (this is the part of the stadium with all those displays and interactive video screens).

It looks very similar to Wisconsin 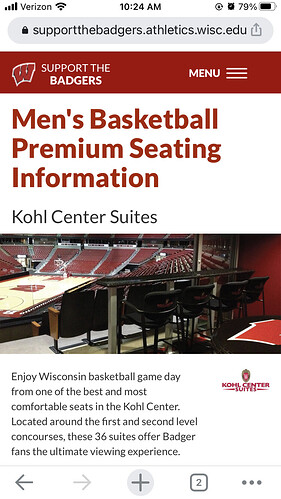 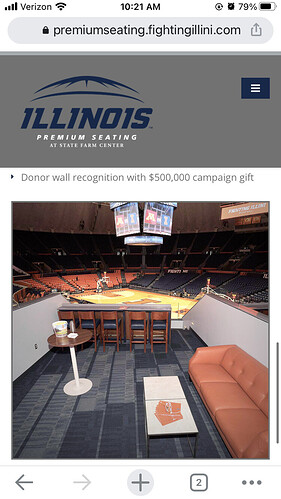 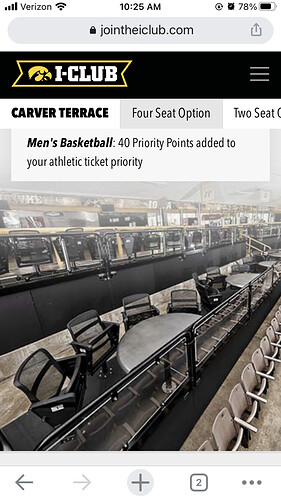 Purdue only has this section as far as I can tell 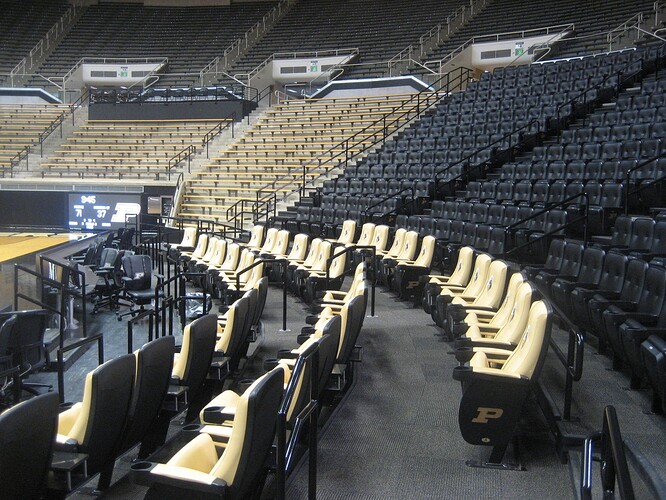 It’s definitely better than MSU’s (none), Indiana’s (none), and Rutgers’ (none). Northwestern allegedly has a club area, but no pictures are online and I get the idea that it’s a public thing like the Michigan stadium club seats.

OSU, Nebraska and Maryland are the only ones I could find in the Big Ten that look much different, like traditional suites. These stadiums are obviously drastically different in construction and have space for such amenities underneath the giant deck overhangs. Crisler just does not allow for such a thing. They have the nice club section amenities, they’re just not directly in the seating area. Given the athletic departments interest in maximizing profits, I can almost guarantee that if suites were viable, they would be in Crisler. And even how they currently are, they don’t stand out to me as drastically worse than Big Ten average or anything.

That may be the most pathetic premium seating I have ever seen. That’s not the type that’s going generate the extra revenue needed or attract lower bowl people to leave their seats and expand the student section.

I think it is pretty nice? They also have a full club area underneath for people in the club seating.

Msu definitely has private suites with their own bathrooms etc. as does Wisconsin. I have been to minor league hockey arenas with significantly better box seating than crislers. For the high dollar prices, those buyers generally want something more private with their own amenities(private bathrooms, TVs, alcohol etc.). Basically smaller versions of the Michigan stadium box suites.

Msu definitely has private suites with their own bathrooms etc

They certainly don’t do a good job advertising them Courtside Seating for men’s basketball is the premiere location to watch Spartan Basketball. Located on the Breslin Center floor, there is no closer place to the action!

Like I said above in the stadium home court advantage post, I’ve been there and have definitely not seen crazy nice private suites like OSU’s or Maryland’s. If you can find an official MSU source backing this up I’d love to see it.

Michigan’s might be “open air” but it still accomplishes a lot of that where you have an entire premium lounge type area for people in those seats. I think it does the trick.

When you start to have “enclosed” boxes, you have to build the arena up and it feels far more spread out like an NBA arena – part of the problem with the Schott, for example.