Why Michigan's offense is struggling, and three other thoughts on Michigan hoops 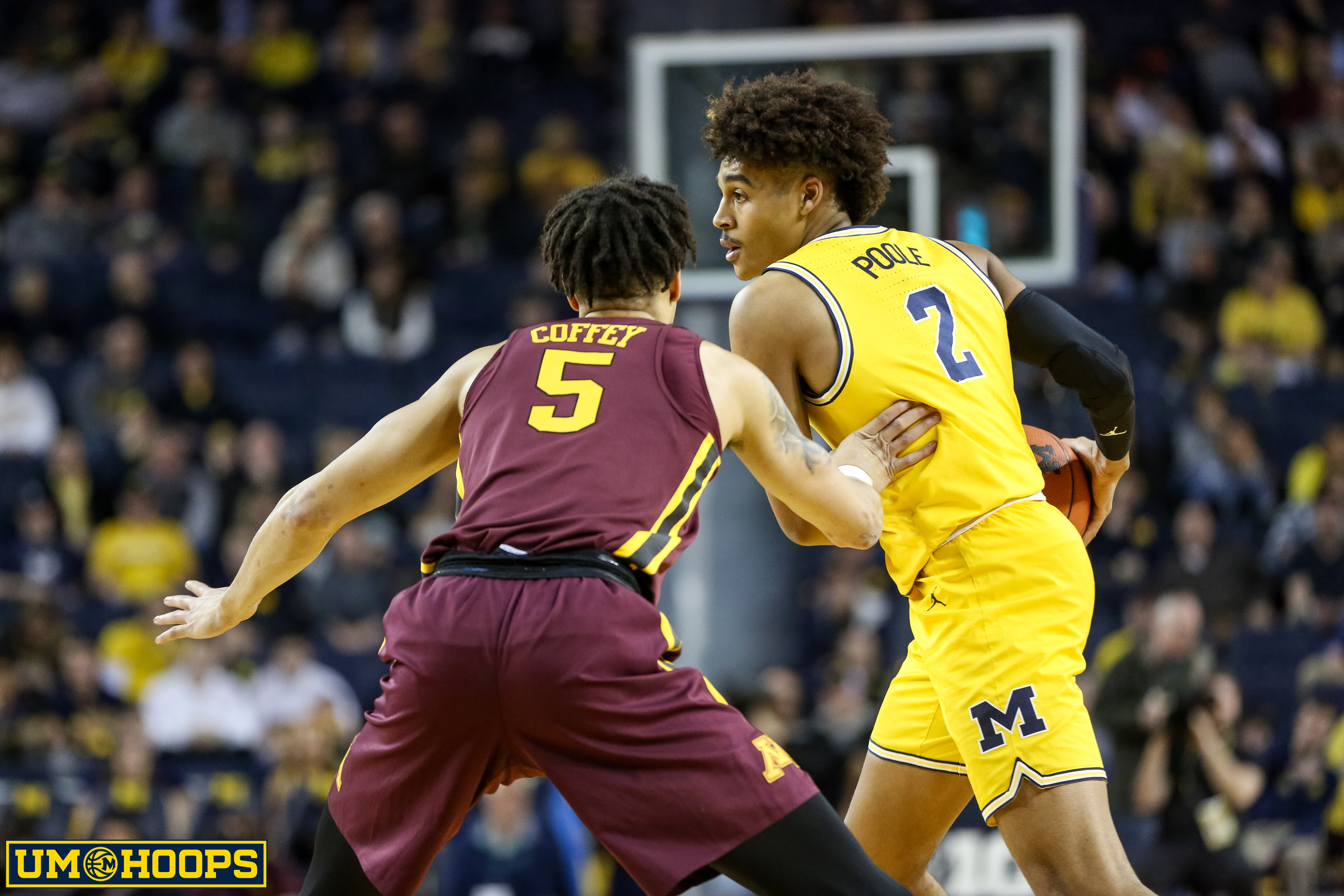 Why Michigan's offense is struggling, and three other thoughts on Michigan hoops...

Some observations aren’t worth a whole story, but are still worth discussing. Here are an assortment of stats, observations and more on Michigan basketball through 19 games.  Today we look at why Michigan’s offense has struggled, what the...

It seems like every year there is a couple of game stretch where I ask myself, what the hell is John Beilein doing? The last two games were examples of this.

Wisconsin: I didn’t think his late game strategy was good. (obviously) With 59 seconds left, either foul Happ when he has the ball or play the shot clock out. (Some of this is on Iggy for poor execution)

Minnesota: 1st half, after sitting for 6 minutes with an early foul, John Teske scores 11 of Michigan’s next 15 points on 5 of 5 shooting to turn an 8 point deficit into a tie score. Then Coach Beilein takes Big John out for the next 3 minutes resulting in a 4 point Minnesota lead. I thought, Teske’s hot, is Coach B. trying to lose this game. Also, Coach Beilein starts yanking Jordan Poole out after any little defensive mistake. I believe how Coach is interacting with Jordan is partially to blame for Jordan’s shooting dip the last few games. His sometimes fragile confidence is down a little.

Now, in the last two years when i have felt this way about Coach, the team has completely turned things around very quickly with Coach Beilein leading the charge!! I am hoping this happens again this year (Like Friday at Indiana!)

Bottom line, Coach Beilein while having some minor flaws, is an outstanding coach, that will get the ship turned around.

I was thinking that we have had trouble closing the last two games, but I can’t fault our Minnesota effort. We got good shots that just didn’t fall.
We need to involve Teske more in the offense. He seems to get most of his shots off of transition and breakdowns. He and Brooks seem to have good chemistry. I wonder how many of Eli’s assist have come via the 5 position.
I have concerns about the IU game. We are struggling and they are desperate for a win.

We need to involve Teske more in the offense. He seems to get most of his shots off of transition and breakdowns.

His scoring comes almost entirely off of ball screen action (or in transition), but he hasn’t really shown the ability to score in other ways.

Regarding JP, I think coach really focuses on teaching and accountability, with the end result a better team in March. Waiting until after the game or the next day to send the message has less impact. Those little mistakes are called possessions and we all know how valuable they are. He’s a great player and teams are playing to stop him. This is JP’s first year on the floor and those little mistakes will be the difference between winning and losing in March.

There’s also the simple fact that UM was fouled on every one of those late-game rim attempts, and only Poole’s was called. The refs let an incredible amount of physical play go.

We saw Poole go through shooting slumps last year. He’s a streaky player, and Beilein has to find the right balance with him and giving him freedom I think. They’ll figure it out. I think it’s interesting if you asked who was Michigan’s best player in November it was Iggy/Matthews. December it was Poole, and January it’s Teske. For the season, November through January I’d say Simpson. Wait until this team combines the best versions of each.

Based on the article, my question would be does Michigan have the team to overcome the current shortcomings?

I.E. can they scheme more spot up threes, can Zavier be efficient against going under screens, etc.

If you think they do, the struggles right now are a blessing. See the adjustments teams made and have time to adjust back - just has to be in the middle of Big Ten season unfortunately, as Dylan stated.

Of all the shortcomings, personally, I’m curious to see how the Zavier pick and roll with Teske adjusts. If teams want to cheat on spot ups, Zavier may need to get more aggressive taking it to the rim with that hook or bringing in that floater!

We need to get Teske more involved in the offense.

In what regard? Do you want to give him post touches? Face up isos?

I.E. can they scheme more spot up threes, can Zavier be efficient against going under screens, etc.

If you think they do, the struggles right now are a blessing. See the adjustments teams made and have time to adjust back - just has to be in the middle of Big Ten season unfortunately, as Dylan stated.

Of all the shortcomings, personally, I’m curious to see how the Zavier pick and roll with Teske adjusts. If teams want to cheat on spot ups, Zavier may need to get more aggressive taking it to the rim with that hook or bringing in that floater!

Teske making threes helps. Will make it tougher and tougher for teams to basically drop the screen and pack the paint. The question becomes: What kind of 3-point shooter is he reliably? Somewhere in the middle of non-conf vs. Big Ten, but hard to say.

I’m a little scared of that route. Teske is humming shooting the ball right now but that seems like a dangerous strategy to rely more on his three point shot.

As a side note on the spot ups lacking, I do wonder if that’s what got Beilein so heated after Poole’s step-back missed three from the first half. He took him out immediately and got all over him. I assume for settling for that shot, but it was strange because he’s been hitting that. Maybe he wanted to open up those corner looks by making him drive and kick instead of the continuous step back.

Michigan’s guys in the corners (Brazdeikis, Livers, Poole, Matthews) need to hit those corner threes, or teams are going to help more and more on the drive.

The beauty of Teske hitting threes is it can pull opposing bigs away from the rim and that isn’t what most ball screen defenses are comfortable doing. He’ll never be a threat to drive like Moe, but 35% 3-point shooting will help open the floor down the stretch.

Based on what you’ve seen, are you optimistic he can hit at a consistent 35% clip?

They need to do a better job on getting Jon the ball on ball screen switch post ups. I like John on the post when he has a 6-12 inch height advantage.

I haven’t looked at it seriously so I’ll ask better basketball minds than mine. Could rescreening help with defenders going under Simpson ball screens? As in Teske screens, x’s defender goes under, Teske sets a screen in the opposite direction but now closer to the hoop?

One wrinkle that we’ve seen occasionally is other combinations running the ball screen, sometimes on the side rather than the top. Forcing two bigs to defend a Livers/Teske ball screen is something I expect Beilein to have ready by the time the four games with Maryland and MSU arrive.

In the last 5 games, Teske is the second leading scorer (66) to Simpson’s 69, yet Jon has the fewest attempts. He has the highest scoring average at .634 (Matthews is second at .469). He has by far the highest 3-point average at .500 (Simpson is second at .348) while having the second fewest attempts at 14. Jon is 7 of 14 on threes while Iggy and Poole are a combined 7 of 40.
I really don’t care how you get him shots, just get him more of them. If the current offensive sets are all that he is capable of handling at this point, them run them more often. The team is struggling to score points lately, go with the hot hand at least until the other guys get it going.

It just isn’t as simple as pulling the Jon Teske lever and dialing him up for more offense.

Just about everything Teske does offensive is either created out of the ball screen game (and how teams defend it) or comes at the rim via putbacks or in transition. You could probably count the number of unassisted (non putback) baskets that Teske has scored this year on one hand.

Michigan will keep getting him a few pick-and-pop threes per game (and it was even when he wasn’t making them for that reason) but the majority of his offensive production (rolls, cuts, slips) is correlated to how teams guard him.

If Michigan is creating those easy looks, it means the guard handling the ball has found the right way to attack.

Everyone loves to talk about his efficiency, shooting percentage and low turnover rates, but a lot of that stuff is correlated to role as well.

Teske has been fantastic, but just trying to add some context to his numbers. For example, he’s scored 10 points on 17 post ups (.588 PPP).

You have to be really good at post moves to make that an efficient part of your game. Teske, despite being awesome recently, is… not that.