Michigan opened up the Crisler Center on Monday night for an open practice and selfie night. Here are some clips of the Wolverines in action from the scrimmage portion of practice.

Wish this had sound so we could hear Beilein’s comments to the crowd as the scrimmage took place! Feels very weird to not hear anything. Nonetheless, awesome to get another glance at the team before the season in a scrimmage setting.

Sorry about the no sound… was very hard to hear what Beilein was saying and then there was cross talk. :-/

No hesitation from teske on the jumpers tonight, so him taking threes is definelty going happen.

I went to tonight’s open practice and here are my impressions:

My big takeaways for the night: Poole might not be ready mentally to lead this team like I think he can, which is ok because he is young and I truly beleive he has pro potential…Brooks, Davis and Iggy exceeded my expectations…Bring Johns into the fold as the season progresses and we have ourselves a very good team.

From everything we’ve seen/heard this summer I’m a bit concerned that Charles has fallen in love too much with the mid range pull up.

From what I saw tonight, I was most impressed by Brooks, Teske, Davis and Johns.
Eli looks like the most improved. He looks comfortable, played faster and shot better than anyone in both the drills and the game action.
Teske is a mountain. He swatted away at least three lobs. He will present a problem in the middle for other teams. Looks confident shooting.
Davis was very active and aggressive, playing much faster this year. His team was looking to get the ball to him down low and he was converting.
Johns can really move and jump for a guy his size. He will contribute this year.
The best part of the night was when Beilein was introduced to a standing ovation. The fans love our coach.

Glad to hear that Eli is looking good, I always felt people wrote him off way to soon. Not only was he a Villanova priority but people quickly forgot that he was the freshman who got the most hype by a good margin last fall.

A few thoughts just from watching the video, Simpson looked good. Wasn’t looking for his jumper at all, which could be a problem, but was getting to the rim and passing it impressively.

You could see the effect of Simpson’s absence on the other team, a lot more one-on-one play from Poole/Matthews/Iggy. That whole group looked somewhat indecisive to me, kind of unsure when to make plays and when to let others, while not running quite as much offense. Hard to know how much is working with DeJulius and Davis/Johns.

Iggy is very aggressive and will get to the rim one way or the other, though he may need some adjustment finishing.

Brooks needs to keep his dribble alive, but if he can just be in the right place, make the right play, knock down open shots - and I think he can - he could be very valuable as the guard off the bench.

Looks like we all saw pretty much the same thing.

Eli was great. I am pretty sure that he was the scoring leader in the scrimmage. And he dished out assists. Also a nice 3. And a nice dunk!

Eli and Z played together well. And Z showed particularly good chemistry with Teske, with some very nice dishes.

DD and Poole were not very effective as a guard combo. From what I saw tonight, I would start Eli ahead of Poole (blasphemy, right?).

Iggy looked great in the drills, less great in the scrimmage. He made 5 of 6 free throws, so that should not be a concern. He’s very physically mature. Besides taking it to the hole, he can also pass.

The evening closed with a 3 point shootout between Poole and Livers. I was very surprised about Livers. Poole won, but it was close. If Livers can make threes (he made one in the scrimmage), he will get plenty of PT, starter or not.

Castleton showed promise, but has a way to go. I doubt he plays much this year. Ditto for Nunez. Not sure about DD.

Oh, one thing about Livers - still needs to be more aggressive/assertive. He had a nice play to get open in the lane and tried a little shovel pass. Go up with that!

Teske looks so much more comfortable out there (I know it’s practice) and it looks like Simpson loves the 2 man game with him.

He also had an open three pointer from the top of the key that he passed up on. I believe I heard Coach B say, “Shoot that!” He needs to be that threat from three. I also think he has a world of talent and needs to take it to the hole, ala, Brazdeikis, who really is gonna be special!

I agree with most of what you’re saying here, but I don’t agree that Eli should start over JP. Don’t get me wrong I love Eli’s game. I’ve been a fan all along. I think Eli’s role will be as a combo guard, and he will be very important in that role. He will play effectively when X needs a rest, or, heaven forbid, gets in foul trouble, and he’ll come in for Poole for a variety of reasons including when JP gets in a funk like he seemed to be, at times, in the scrimmage last night.

Eli plays within the system incredibly well. He has a really good first step, passes the ball well, had that nice “teardrop” last night and can shoot the three better than many of us may think he can or have seen in the past. I don’t think he starts unless there are some unforeseen circumstances but I think he has an important role to play.

By the way, speaking of Poole, that spin move into the lane and drop off for Charles for the dunk was “sick!” He IS the best three point shooter on the team and he’s a critical component to this team.

As for Isaiah, yep, he can shoot the three, too, and I think it’s important he does, and, hopefully, shoots it well, which I believe he can. Just my thoughts. Fun night last night!

Can’t let 1 open practice decide that Brooks is better than Poole. Besides the varience, Brooks had X on his team while Poole was playing with DD. That’s gonna make Brooks look a lot better. But very excited about Brooks’ development. That is huge for this team as they are so desperate for some outside shooting. I only saw the video, but there was nothing there to make me think Brooks is as good as Poole. JP looked fine, just missed a couple shots

I share Reegs’ concerns about Charles falling in love with midrange, but I have a hard time believing Beilein would let that become too much of an issue.

This is just going to be such a different Michigan team than we have come to expect under Beilein. That’s why I’m having a hard time predicting what they’re gonna do. There’s a lot of talent there though.

TO me, the biggest X factors this year that could raise out ceiling to B1G championship level are Livers and Brooks outside shooting, and Poole’s playmaking ability.

Brooks was putting pressure on the defense at all times. I am not going to say Brooks is better than Poole but I hope that Poole would choose to play more like Brooks played last night, in the future. If he doesn’t maybe giving Brooks more playing time would motivate Poole.

I think your point about playing alongside DD versus Z might explain a lot of Brooks success and Poole’s struggles…(I hope so.) I also wonder if Poole just did not treat this as a serious practice because maybe it really wasn’t?

I feel pretty good about our guard situation knowing Brooks seems to have improved.

Poole is highly skilled and a good shooter. He is confident and athletic. Brooks is a good basketball player, a typical coach’s son who really understands the game. Last year he was a little underdeveloped physically and was struggling with the big leap from mid level high school to D1 basketball, but you could see even then that he was a player. He is going to be one of those guys that make a big sophomore leap.

Finally watched the video, I agree with everyone that Brooks and Teske both looked really impressive. The size, athleticism and fluidity of this roster is noticeable and reminds me of the 2012-2013 years. I’d be curious to hear how those squads were split…I could see a behind the scenes draft where Yaklich got his hands on Simpson, Teske and Livers.

I don’t think it looked like Poole struggled as badly as I thought based on the thread, he missed shots but he was successfully creating space and we’ve seen him hit them before. My only major takeaway is how awesome the yellow squad was defensively. I think it was less of an indictment on Poole, Matthews and Iggy and just more awesome team defense led by the 3 guys I mentioned above. Matthews’ mid-range and Poole’s stepbacks and quick shot selection seemed largely a result of how tough the defense was at times. I’m more impressed that those two plus Iggy were each individually able to at least create those shots, even though they weren’t falling.

I also found this mlive article which says that Poole’s squad was actually up 14-10 at one point, which based on the video it looked like Simpson’s squad was dominant from the jump unless I missed something.

Also man Nuñez has a pretty shot, even when it clangs off back rim. 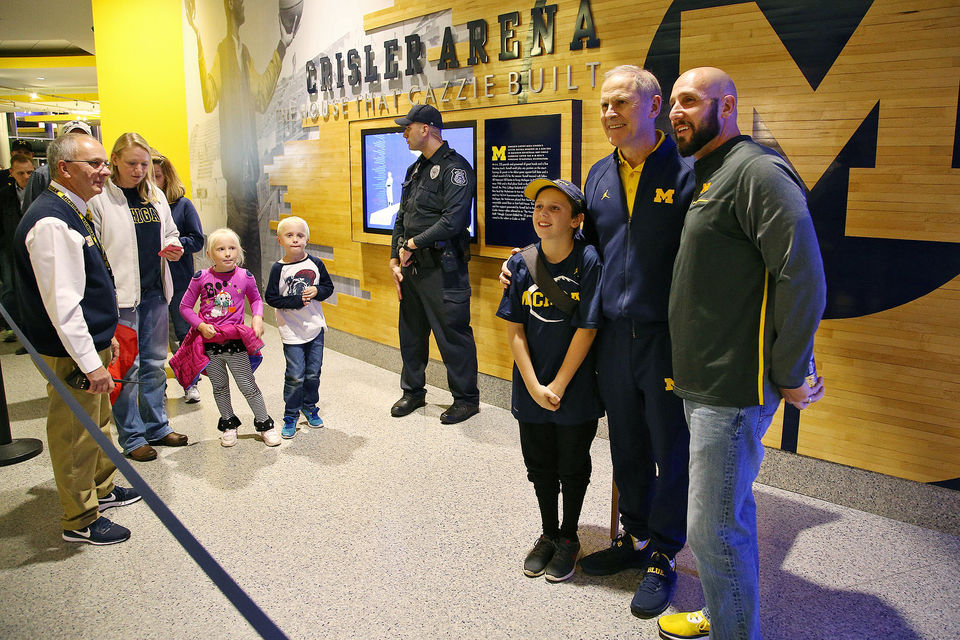 Michigan basketball held an open practice and scrimmage as part of its Selfie Night.