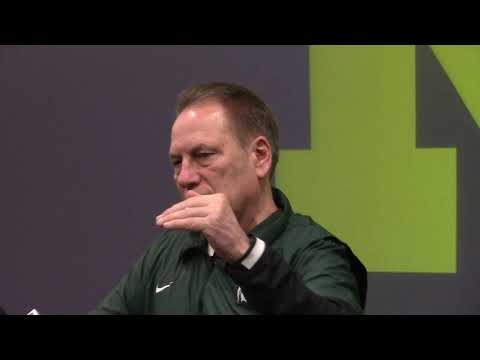 Plus a nice shot at Gabe Brown, whom he has already destroyed

He is the worst of the worst. And yet the national media loves everything about him. Biggest con job since Maddoff.

Devante Jones shoots 17% from 3. What is the point of him saying that? I hate him so much.

I can’t even watch it…I hate his attitude and the pass he gets for it.

Question…if Gabe Brown wants to play another year and goes in the portal…would you want him on Michigan? I think I would. He has flaws, but feels like he’s a good player who does a lot of things well that can’t please Izzo and has his playing time thrown around like a yo yo.

Izzi always blames the players effort when they lose. MSU players love him and he is a hall of fame coach. But I’m tired of Izzo’s excuse that it’s players effort.

He stands there, kind of crumpled, talking softly, head down, not lookin’ at the camera, whiny and feeling sorry for himself. This is the same guy that acts like a madman on the sidelines. He seems to have such a split personality acting like this big, tough bully on the one hand and a hurt little boy on the other. Someone needs to tell him that neither of those personalities are becoming. In, both are rather disgusting.

As for the things he was saying, ball screen defense? Whose responsibility is it to coach ball screen defense? “I played a player who was sick.” First, THAT’S A COACHING DECISION! YOU choose to play him. Secondly, WHY would you play a player who was sick? That’s on you man. “We have no leadership” but who recruits these players and who develops them AND their leadership or lack thereof.

Then he demeans our players as he did to Hunter during the game and afterwards in the _________line. I left that blank purposely to graphically represent the “handshake” that DIDN’T happen. Our players will remember. Believe me they WILL remember.

Oh, and while the announcer implied Izzo changed the game with his irrational outburst and verbal attack on one of our kids,shortly after the outburst after State went on a run the young man he verbally attacked scored our next ten points and TOOK OVER the game!

I listened to one minute of his hurt puppy dog show and couldn’t stomach anymore. And some people “respect” this guy? If I would allow myself to, there are times I’d feel sorry for the guy. I almost always feel sorry for his players!

And, did he really say DJ is only shooting 17% from three? Try 33% Tom, and what you missed I guess, and failed to credit, is that DJ is a flat out WINNER! You used to be considered a winner, too, Tom, but any more it seems you’re just a whiner! Maybe you should go back to East Lansing and coach your kids rather than whining in Ann Arbor!

not lookin’ at the camera

To be fair, there are usually a lot of cameras

It looks like this one was off to the side.

Well, unless one was down in his lap, he wasn’t lookin’ at ANY camera!

Fair, I actually think the trash talk thing is kind of funny between Hunter and Izzo because to be honest, I am willing to bet that Izzo is more frustrated that his team doesn’t have someone who plays like that and Michigan does than that Hunter is doing it.

I agree. Izzo’s whole persona screams that his attitude should be “if you don’t like him talking trash, stop him from scoring.” Seems like a corollary of the “you don’t court storm when your expectations are higher than any one game” that seeps from that program.

I think he was working the refs, like he always does. And you can’t really knock him for doing it. Blame the refs for letting it work.

Tom never fails to deliver the goods after a loss. So satisfying!

Like when the restaurant offers a little dessert on the house.

Even more sullen and self-pitying than usual. I will say though, the bit where he says something like “we won’t find any leadership on this team, but maybe we can learn to defend a ball screen” had me in stitches.

Can you imagine saying, about your kids, kids who work their tails off, really, and who suffer his abuse daily, I’ve been to an Izzo practice, so I know and we’ve all seen him on TV with those hateful looks on his face, can you imagine him saying, “there will be no leadership on this team.” If he calls them out in the privacy of his locker room, that’s one thing. That’s man to man. That’s looking his players in their faces and challenging them to be leaders. Doing it in that press conference they way he did, that’s just throwing them under the bus and doing it when they are already hurting after a stinging loss to their greatest rival. I would suggest what he did in that moment was NOT appropriate leadership, either.

It’s really amazing. I mean, his players clearly have a bond with him and they know what they are signing up for. Just amazes me how how often he blames his players for everything and they (and their parents) just accept it.

It has always boggled my mind.

It’s funny that he’s on the verge of breaking Bob Knight’s big ten wins record. I remember always thinking the same thing regarding Knight: why would anyone voluntarily sign up to play for him?

Izzo is nowhere near as bad and villainous as Knight, but Izzo does feel like a something of a parallel case, one generation later. Izzo is barely hanging on as a crotchety anachronism in a sport and culture that has largely passed him by. I don’t think Izzo will suffer the same undignified end of career that Knight did, because I don’t believe Izzo is a truly scummy person like Knight is. But Izzo isn’t aging gracefully. Once he leaves the game, I think his record and career will be respected but no one will be modeling themselves after him.

The funny thing about it is it shows how he just cherry picks things so he can whine as much as possible. Moreso than anyone on our team (except maybe Eli), Jones has an large sample of 3 point shots and a very consistent history of shooting in the 30-35% range. It’s not exactly shocking for him to knock down a 3.