French wing visited last week. Video and some more info that I’ve been able to dig up in the post.

French wing guard Solly Stansbury is the newest name on the Michigan radar.

Looks much thicker to me.

Looks like a decent slasher with average to above average athleticism. The shot looks like it could use some work. But yeah his size / strength looks nice. He’d be 23 by the time he ever took the court which is pretty crazy.

@Colby: Don’t see why not. There’s really no difference between the 3 and the 4 in the offense, so the question is whether he’s big/strong enough to potentially guard fours.

No idea how he’d rate and not really important. Seems pretty versatile on the wing but I’m only going off the same film that you guys are looking at in the post.

The play at 0:18 on the 3rd video will make some people happy Michigan is showing interest. Granted his dependence on his right hand there was meh, but that finish was something many of you yearn for.

This is his dad… So he has the genes to be a good finisher.

Really the drawback here is that he’d probably have to sit out for a season because of the gap between graduation.

I think he would probably have to sit one and have three to play. Not positive on that though.

There would be a lot of NCAA-work here with his age, gap year, playing for a club team in Europe, etc. Not really sure how it would all add up.

anyone explain to me how this make any sense.

A 21year old who already played severals of pro-ball in France suddenly wants to go to college.

He played youth team ball there. At a similar point in his career to where Moe Wagner was where he could sign with his club or go to college. Just that he’s older and went to HS in the states. Almost like a transfer situation.

So he either thinks USA college ball would be better for his development, or wants to take his shot at getting into the NBA? I respect the goals, but his age will definitely hurt him in the draft, if it were to ever come to that.

Was he recruited at all out of high school?

Looks like Stansbury will announce Friday. His dad has posted a bunch of images at UC on his Twitter. 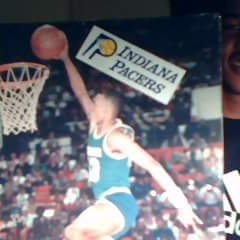