Figured this could be a good offseason discussion… Plenty to breakdown.

We’ve talked about Caris LeVert, but anything else can be on topic here.

How do you guys feel about Simmons vs. Ingram?

Going to tweet out some NBA Draft shot charts over the next few days. Here's Ben Simmons vs. Brandon Ingram. https://t.co/68Fg0ANQ6v

I think Simmons has the higher upside, but I am not sold on his ability to work to get better and do the little (hustle) things on the court. He loafed too much in college for my liking. That being said, if he develops a jumper, watch out. Both are special talents. As many have said, the drop off is pretty big after those two, so slots 3-8 should be interesting. Wouldn’t be surprised by some trades if teams are not sold on the talent in that range.

Caris LeVert, 6’7" senior forward, Michigan: “If he’s not coming off two foot surgeries, he’s a lottery pick. Every doctor is different, but the team that takes him is going to have to be comfortable knowing he’s probably going to need more rest. But he can make plays with the ball and he’s a great kid. He’s a good athlete, really improved as a shooter.” 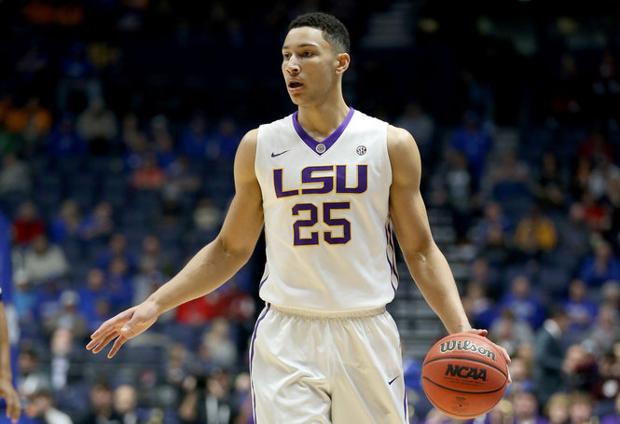 Sources: Philadelphia 76ers to select Ben Simmons with the No. 1 pick

76ers have informed the camp of Ben Simmons that they will select the forward with the No. 1 overall pick in the 2016 NBA Draft on Thursday, league sources informed Cleveland.com.

It is crazy to hear 1) virtually unanimous views that Caris would be top 15 if healthy, 2) that 40% of 11-30 are sub-rotation, and 3) the league is moving towards his skillset, and then think that he lasts very long even with the foot. Even if its a 50/50 call on his healing (or even 25/75) he pays off better than pretty much everyone in the 20s from an expected value standpoint. Can’t see how he lasts past boston’s early 2nd round picks when salary guarantees drop, but if i was picking on the back 20s and felt at least 50/50 on his medical, i’d take him on a winning team b/c his minutes would be limited anyway.

I wonder how much of that is due to being forced to attend college (only alternative to go overseas) and playing for a noncompetitive program. I wonder what his effort level would have been better had he gone to Kentucky/Duke/UNC and competed for conference and national titles.

But I didn’t really watch LSU this year so I’m taking your word for it on effort.

I think the only risk with Caris is his health. He’s had a couple of foot surgeries, and that’s the only reason that he’s not a first-round pick. In fact, I think he’s a lottery talent. But he’s had those injuries that kept him out basically all year this year. He played a little bit early on, but that’s it. I’ve got him ranked in the second round right now, but it’s just a health thing. He’s had multiple injuries. You don’t know where he stands on that.

He’s athletic. He’s got a wing span of 6’10", very, very skilled. He can shoot it, and he’s a really good spot-up shooter, but he can shoot at the three-point range. Not as good of a pull-up jump shooter, but he’s been pretty efficient throughout his time there. He defends fairly well. His length really helps him there. And he’s got a good feel passing it.

I think his time – if you look at his averages in his time at Michigan and push him out to 40 minutes, and sometimes people do it to 36; I happen to do it to 40 because it’s easier to wrap my head around with a full college game, without coming out, he averaged like over 21 and close to seven rebounds and close to seven assists. He’s really productive.

I think he’s got a chance to be very good, but it’s a question of his health, and if you are satisfied that he’s passed all these things and he’s going to stay healthy, then I think he’s a first-round pick.

You would have to guarantee his contract then. So 2 foot surgeries, 33 games played the last 2 years, possibly no summer league for him this year. There is no reason for a team to take a gamble like that. At least in the 2nd round the team wouldn’t have to guarantee anything.

No reason? Other than the chance to get a lottery talent at the end of the 1st round? There is risk involved in all prospects at that point in the draft. There is a risk that a healthy player simply isn’t talented enough to contribute.

It’s the same logic that took Embiid 3rd overall. Of course, Embiid was a much better prospect, but the risk-taking reasoning is the same: IF he is healthy, he is an absolute steal.

I still think it’s a leap to say he’s a lottery type player after 2 foot surgeries. Nobody has seen him play a minute. If he didn’t have the surgeries sure but that’s not dealing in reality because he has had the 2 surgeries. If you’re a lottery team and an embattled general manager which there are many would you take the chance on LeVert. If he doesn’t play much this year and the team does poorly you might get fired.

Each GM will have their own view, but in the scenario where you as a GM have say the 27th pick: You will spend that money no matter who you pick (save for draft/stash, eurostash, etc), and the odds are that no matter who you pick that they won’t make a meaningful contribution to winning based on the splits of who washes out, who is rotation, etc. Add to that that your team is already pretty decent so that bar to make an impact is actually higher than average, and the underlying conclusion is this: you will absolutely have to get lucky to get something of value at 27 for the already guaranteed cost. why not go for the guy with the highest ceiling, since the worst you’ll do is strike out like you would with the vast majority of 27th overall picks?

All depends on a doctor giving you a range of probabilities, but at a hypothetical 50/50, I’d swing for the fences.

I’m not saying that a lottery team will or should take him. I gave reasons why a team in the bottom half of the first round might take him. If healthy, he’s a lottery-type talent. If a team’s doctors give him a clean bill of health, then it makes sense to take him later in the first.

I feel like there are 3 spots at the end of the first where a team might take the risk with Caris. I think Boston at 23 is the earliest and then could see Pop taking him to replace Manu over time. Other than those two I have to say he’d possibly be a nice fill in for Barnes when he gets his deal.

Philly is in the value/lottery ticket business and has two picks in the 20s. maybe burned too badly on a few decisions already, but one could argue they would be all for buying high risk/high reward assets at high volume and hoping a handful work out

They also have ZERO shooting on that team, getting worse if they draft Simmons

A sad indictment on Nik Stauskas

I’m still holding out hope for Nik. The good thing about him being in Philly is there is ample opportunity, their talent at the guard spots is pathetic. Okafor’s a guy who saw some double teams and Simmons is a capable passer/creator. If Nik can find some consistency I actually think he’s a good fit alongside those pieces.

Nik shouldn’t have turned down Team Canada Olympic qualifying. Instead he’s doing stuff for TSN and the NBA Draft.

Probably didn’t want to poison himself with the Zika virus…

What does the George Hill to Utah trade do to Trey Burke?