Looks like snow in Chicago is keeping the team in AA tonight. Travel and play day tomorrow!

That is probably not a good development.

Flight delays don’t bother us, As long as we show up to the arena an hour or so before the game we will be fine

The way our guys have been starting games, a change in routine may not be a horrible thing.

Just a week after their first meeting, Michigan and Northwestern will meet for a rematch in at Allstate Arena in Rosemont, IL (7:00 p.m., BTN).

Yeah, big one tonight. Wiscy is pretty bad (lost 8 of 9) and, sure, we could lose to Iowa at home, but it’s unlikely. Being at 10 wins before OSU would be good, while being at 11 wins would be sitting pretty and allow for a potentially excellent finish. And while it wouldn’t be a signature win or anything, a win tonight would be a group 2 win.

And while it wouldn’t be a signature win or anything, a win tonight would be a group 2 win.

My thought is if you drop one of the next two, especially at Wisconsin, the OSU game becomes a little bit of a must. Lose @NW or @Wisconsin but beat OSU, still a lock to make the tournament even if you lose at PSU and Maryland.

Lose one of the next two, drop to OSU, then it’s very much tempting fate by losing to PSU and Maryland. I personally still think they’d make it but could be in the play-in game. (Ignoring the BTT Tournament possibilities) Would definitely be a stressful Selection Sunday.

PSU has enjoyed a very easy conference schedule to date. Let’s see how they look over the next couple weeks.

One thing is for sure tonight, there shouldn’t be a slow start. Obviously it can happen with missed shots. However, there’s no surprise or unfamiliarity facing this zone. Hopefully we see a few threes go down early to grab some momentum from the tip.

If we start slow I hope Beilein goes to Duncan and Poole early. That’s what got us going last time.

You at the game Dylan? We are right next to press table.

Attendance looks light. Might feel a little more like a neutral court game where the other team’s fans travel better.

Bleh. Of course Lindsey and McIntosh wake up, and Poole cant buy a 3

Michigan somehow hanging around despite missing free throws and shooting just 3 for 14 in the second half. Wolverines have gone more than seven minutes without a FG make and are 0-8 from deep this half. Still, 49-44 with 5:12 to go.

The Matthews deep two when down 6 was a microcosm of tonight. Just absolutely not there mentally and gave that game away. Hate watching games like this. 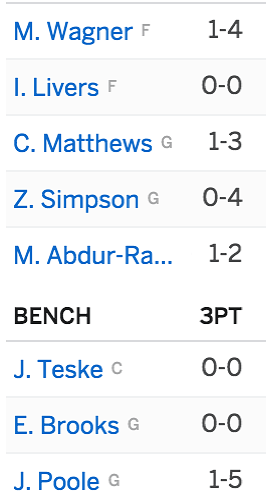 What an utterly stupid game. Sure they couldn’t throw it in the ocean. Sure they don’t know how to feed the post. But that Poole pass into the guy’s feet, Duncan’s impossibly stupid 1 on 3 attempt at the rim that led to a 3 the other way, Poole not understanding what DOES fall into Pardon’s incredibly limited skill set by trying to put a lay up past him, passing up a decent shot to pass into a worse spot, I just don’t know that they could have played a dumber second half. Mom is in the hospital and has been since Thursday and this was really really not what I needed after a long shift. Just garbage. And sadly predictable. This has been coming for a while now.