In the spirit of raising up our collective spirit in this tough time, I thought it would be cool to post what your favorite memories/highlights/games/plays/moments were of this season.

I’ll go: the neutral game against Rutgers and the home win over MSU. We were facing the potential of a season spiraling out of control and those wins made me feel like we could achieve some lofty things again.

Battle 4 Atlantis. Going from complete unknowns and despair in Beilein leaving to Juwan dancing on the podium after the Gonzaga blowout was such a fun ride.

Juwan dancing will be how I wish I could remember this season!

I am going to rewatch highlights from this game, I don’t recall them off the top of my head!

X down the stretch at home vs Purdue, willing us to victory!!

Wow those were impressive! Are the rims mic’d up extra loud at Northwestern? They were so loud on the video haha

I will add a random one: every time Franz went coast to coast by himself this year. I think he only did it like under 5 times but it was so fun to watch when he did. His transition game really stands out to me

Not necessarily my favorite (they’ve been mentioned above), but Juwan’s interview when he didn’t know what the RAC was just made me smile. And then for us to go in there and be the only team to notch a victory there…extra special

I loved that as well. “We have to get to the rack!” Lol

We had some interesting accomplishments this year: only team to beat Rutgers in the RAC, Battle 4 Atlantis champs, one of 2 teams to beat Gonzaga, Simpson becomes all-time leader in games played for Michigan, etc. 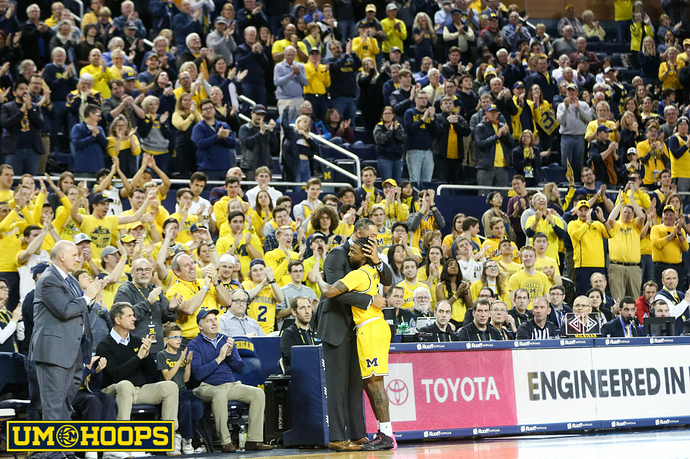 Also this. If only we’d known the significance of this being the penultimate game

Beautiful shot. I tried to really soak up that moment even though it came at the end of a mediocre game vs Nebraska. In my most pessimistic part of my brain, I said what if this was the last win of the season.

In a way, when we beat Gonzaga for the B4A Championship, I kind of had a feeling that it might be the highlight of the season when it was all said and done. And to be honest, with the sort of expectations going into the season, I didn’t mind it at all, as it was the medicine UM sports fans needed before that dreaded football game. Now that it’s actually the case, I don’t mind it either.

Another highlight was Simpson and Teske’s final game at Crisler. I go to almost all home games, and usually, I sit in or near the student section. For this game, I snuck to the very top of the arena around center court before the game started, where there was an empty row of desks, and just marveled peacefully above all the chaos; it was the last time I’d be seeing two of my favorite Michigan players of all time, and I wanted to enjoy it without any distractions around me.

A few things that made me laugh…

the final shot I’ll ever see X attempt. It was background shot of the court yesterday, Paul Mulcahy from Rutgers came over to talk with X, who was at the FT line getting up a couple final shots. They chatted briefly, then X let fly with one last FT. Air ball.

Ha I was telling my buddy about the air ball too…but like true X, he did then grab the ball again and lay it in. So his last FGA was a make

Juwan dancing will be how I wish I could remember this season!

Put me down for this. That run followed by the dance made me very comfortable that we’re in a good spot going forward.

I can’t give just one or a few moments. I have a collection of memories that will stay with me for a long time. With the season having so many up’s and down it was like riding a roller coaster of emotions.