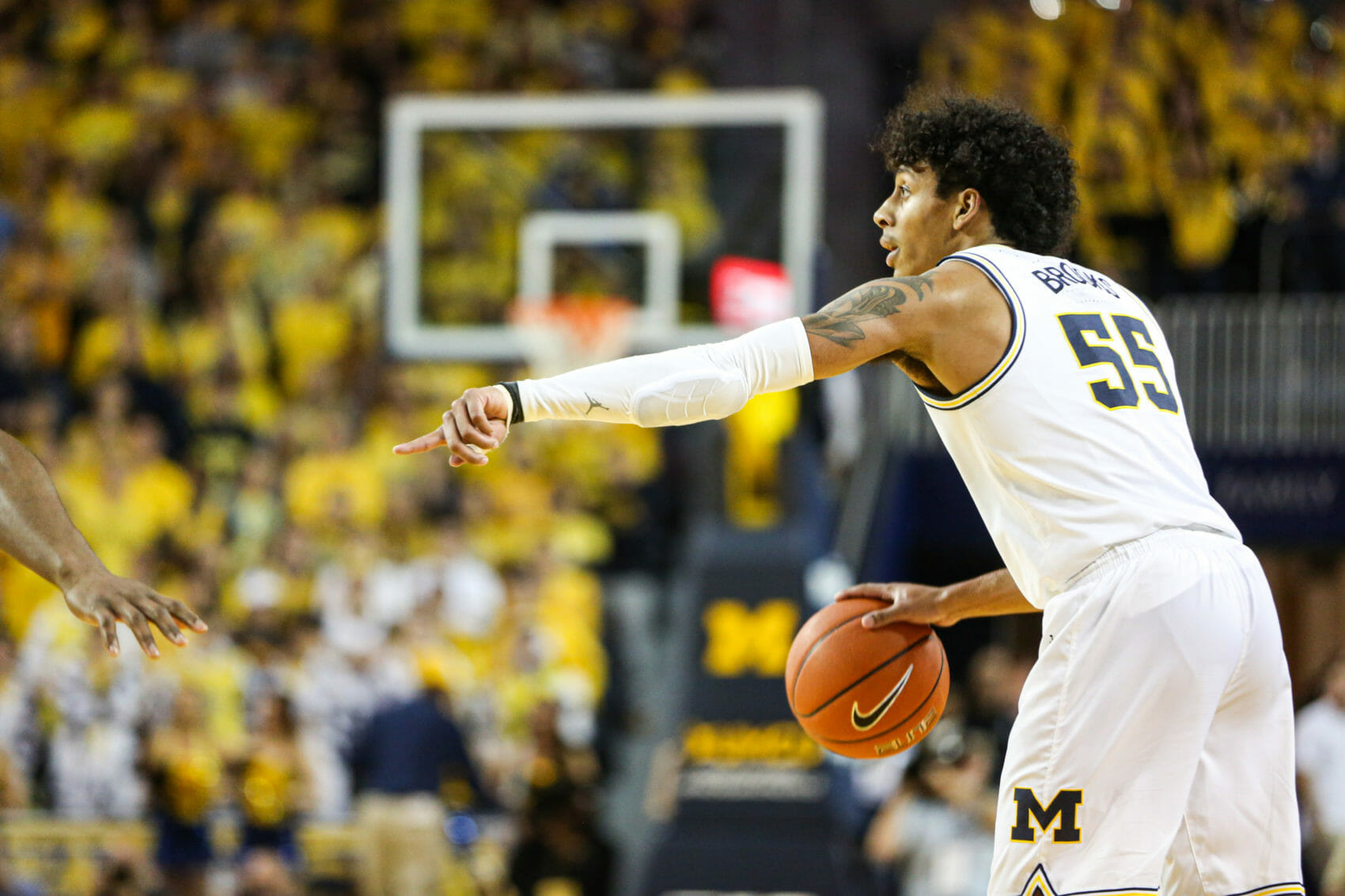 Michigan picked up a bounceback 103-91 win over Iowa on Friday night to open Big Ten play on a positive note. The Wolverines shook off their tentative offensive performance at Louisville and more closely resembled the free-flowing, quick-firing...

I enjoy your writing as always, Dylan. I’ll nitpick this statement though : “picking up an early Big Ten win is a luxury”. A home game against Iowa is a requirement in my book. If you lose that one, you’ve got to make it up somewhere else, probably on the road.

Winning the next two would be great- get a B14 road win and wrap up a fantastic non-conference schedule with a win against Oregon.(And assume we win our “buy” games.)

Yeah that’s probably the wrong way to say that. It is a game you can’t lose, I completely agree. It is also nice to have already knocked off one of those games is all I was trying to say. Edited that slightly.

Had to have felt great for Brandon Johns to come off the floor and get an embrace and, presumably, some words of encouragement and gratitude from Juwan Howard after his performance tonight. For a guy who’s just missing the confidence element, like you said Dylan, now he just needs to build off of last night’s win.

I remember during preseason everyone wondered how will Michigan respond after a loss. Well they responded really well! This team isn’t even close to there ceiling yet and having Teske in foul trouble allows some underclassmen to gain experience and confidence.

Some of us fans from Mid-Michigan were pumped big time, to be in the house, catching Brandon’s game.

not just underclass men but a veteran named Davis as well. I am glad that we had him as the 3rd string

I was impressed and surprised with Wagner’s open court speed.

Loved the energy that Johns played with. Even if he’s not making shots, he can still impact the game if he plays with a high motor.

Franz looked good. Nice to see him get to the line 10 times and he looks like a great foul shooter which is a plus. I’m sure the 3’s will start falling for him eventually and he also showed some nice ability to get to the bucket off the bounce. I don’t know if it will all come together for him this year but a summer in Camp Sanderson and a year of experience should help him make a huge leap next year.

Really like Teske as a passer out of the high post. That’s an underrated skill that he possesses. Was surprised that Garza kind of had his way down low against him considering how good a defender Teske is.

I don’t know if it’s sustainable but we have now made 85 3’s on the year to our opponents 42. Numbers like that will lead to a lot of wins this season.

I loved the defensive game plan. It wasn’t always easy to watch Garza go crazy, but the only way the defenceless Hawkeyes were going to win would be to hit a bunch of 3’s, and that was not going to happen. Not doubling Garza, and hedging most of Iowa’s ballscreens, meant that open 3’s would not be available. That plan was executed almost perfectly, and I loved that Juwan called timeout immediately after Bohannon hit an open 3 late in the first half. At least, I assume that was why he called timeout.

You guys might not have noticed, so I thought i’d let you know that every foul called on us was not really a foul, and in fact some of them should actually have been fouls on Iowa. That was the feeling of the “referee” sitting right beside me at the game, anyway. He was very passionate about it (and I mean right from the tip; it was incredible), so I had to assume he was correct.

There were a couple of really strange officiating situations. The foul called on Davis in the second half when he and Garza were locked up was odd. Everyone in the gym thought it had been called on Garza, even though the official who called it immediately signalled “51” to the table. Fran even subbed Garza out, only to have him come back in to attempt the free throws when the confusion settled. I’ll never know how it got to that point. The other odd situation was when Wymer had a 20 second conversation with Fran that delayed play. I was happy to see Juwan head towards halfcourt and say something to break up the party. I don’t think it was a coincidence that we got 3 very quick calls in our favour right after that. Wymer knew that he had no business entertaining Fran for that long, and Juwan calling him on it probably got us at least one of those ensuing whistles.

I thought while watching I could see Juwan say “T him up” when Fran was bitching. Juwan was pretty fiery last night, it was fun to watch.

We are now seeing the depth we thought we would see before the start of last season. I know just about everyone on here is saying this but seeing Franz and BJ getting better each game played now is really exciting and who would have thought “Big Country” would be a contributing factor when called on. This is good.

I like what I saw of Juwan’s ref management last night. I always thot that was a Beilein weakness. Way too earnest an approach.

So happy that Davis is getting a chance. I didn’t think he was ever going to be all big ten but I thought he was going to be a solid big off the bench with the potential for more. When it looked like he was going to flame out and not ever have an impact I was kind of surprised. On the Europe trip he looked great and then nothing again, I figured it was over for him.

Glad to see his value coming through with Juwans style of play. I think he could contribute even more as one of his top skills was his solid foot work and back to the basket skills. Maybe he will get some touches coming up and shock us further.

Also if johns just woke up, I feel bad for the rest of the country.

This teams ceiling is scary.

I agree that Franz will figure out the three point shot. A lot of shooting comes from feeling the rhythm of the game.

Regarding Garza, Teske is a very disciplined post defender who is good at holding his ground and never jumps because he knows that will get him in foul trouble. Garza knows this and he uses his speed and craftiness to throw up shots around Teske.

I think Livers actually did a good job on Garza the couple times he got switched into him. Probably wouldn’t be sustainable over a whole game but I think you need a quick defender against Garza rather than a traditional post defender.

That margin may not be quite sustainable but getting 65 more threes up than our opposition is a good way to keep it going.

The shooting will come down a bit - I doubt Livers and Brooks will keep shooting 49% on nearly ten attempts a game between them. I doubt Simpson will stay over 40%.

But Franz should exceed 26%, and if Johns can start making one a game that would help.

DeJulius at 42% seems high but who knows.

Franz is definitely Mo’s brother. He’s not the star (yet?) so the camera doesn’t find him as often as it found Mo, but you can see he’s not afraid to voice his opinion to anyone close.

EDIT: Just realized this was about McCaffery and not Wagner, whoops

Umm yeah giving Davis post touches is a few steps too far for me. He did a nice job finding wide open under the basket last night. But he’s likely a defensive liability still.

Great to see Johns and Davis play so well. Castleton was a sure thing heading into the season, I thought, but he is not playing at quite the level I expected.