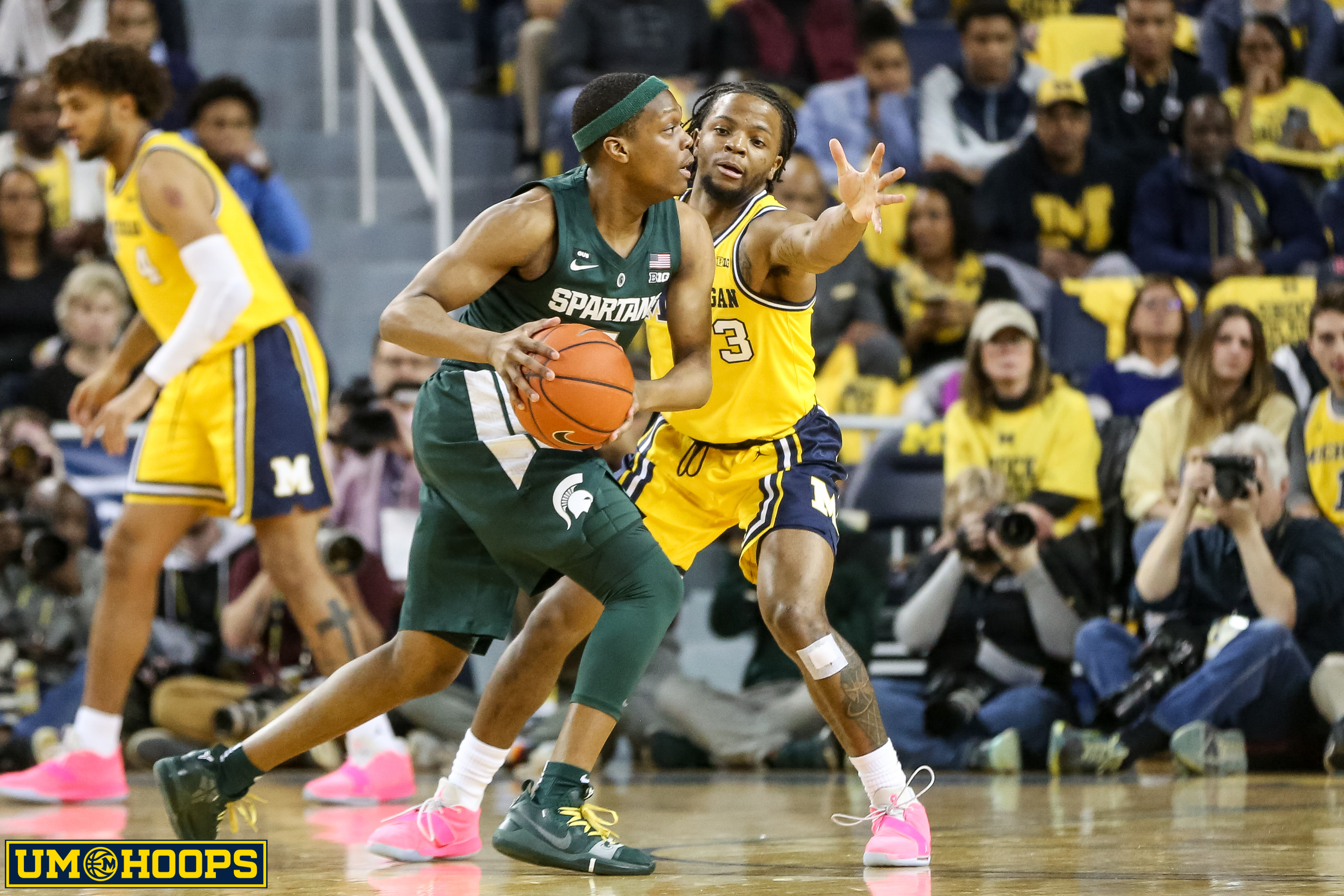 Leading 51-45 with 15:42 to play, Michigan looked to be on its way to a fourth consecutive win over Michigan State. The Wolverines were scoring 1.39 points per possession and had somehow managed to stay a step ahead of the Big Ten’s best offense....

7-26 from three including Poole’s two late bombs was still better than States 5-20. Winston doesn’t make a three and still dominates the game offensively.

He had two more assists than our whole team.

Very frustrating game for us.

How about throwing it into Teske when he has Winston covering him? Could we try that once? Yeesh.

And Winston doesn’t make a three as well. 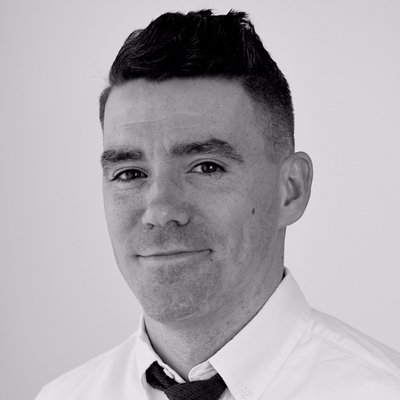 Considering the outcome, the most unbelievable stat today might be Michigan State's modest four fast break points. Who would've guessed that in an MSU win? The Spartans beat U-M at its own game — ball screens in halfcourt sets. What a performance.
1 Like
RyanInHolland February 25, 2019, 1:56am #5

They did, especially in the first half and Teske made them pay. Second half guys wanted to shoot the jump shot instead of take advantage once again.

I was very impressed by how hard and how disciplined MSU played. They made very few obvious mistakes today, and I can’t recall a single Michigan basket where I thought the play was poorly defended. In one obvious way, MSU matches up with Michigan better without Ward than they do with him.

My two disappointments in this game were Poole’s defensive lapses, and Brooks’ shot. I’ve felt that Poole has been a far better defender than he was last year, when he often looked completely lost. Today was a step backwards from the progress he’s made; blowing switches, fly-by city, committing weak fouls, and completely losing track of his man. Hopefully, it was just a bad day for him, but to me, it speaks to lack of focus. Re: Eli, I’m not disappointed in him; he finally took the shots that needed to be taken. I’m only disappointed for him. You like to see results when you do what’s expected, and to miss that badly on both shots has to be a huge blow to his confidence.

Only bright spot may be that this makes it a bit more likely that I’ll find a reasonably priced single seat to Thursday’s game.

A couple things that stand out to me:

Ward being out is a weird advantage. Instead of using nearly 1/3 of their offensive possessions on Ward’s low efficiency post game, the ball was in Cassius’ hands 33% more of the time creating much more work for the entirety of the defense. The ball moved quickly and often and our defense looked winded because of it. Instead of the ball sticking in the post it was zipping around the perimeter and Winston and Goings were able create much more favorable possessions.

Hats off to Goings…I always saw the dude as a liability and a less athletic shorter liability at that; but boy did he make Michigan pay in that first half especially.

Tillman…what can you say? I guess this is why he won Mr. Basketball over a guy like Livers. He defends, rebounds, moves well and got great looks against an “elite” defender in Teske.

Poole and Matthews…performances weren’t up to par with what’s required in big time matchups like today. Sometimes you just don’t have it.

I thought State looked like “the hunter” and Michigan played “the hunted” meaning we were careless and relaxed and MSU looked focused and determined; like they flat out wanted it more honestly. Again…hate saying it but props to those MSU.

Difficult loss to swallow but I hope this turns the tables and gets Michigan’s mindset back to being hungry.

We thought all season that a lot of missed free throws would cost us the game. It was blown layups which caught up with us IMO on the offensive end more so than free throws.

Agreed, the defensive lapses that left guys open for three or got caught off balance for an easy foul call were killer today.

Winston is the Big Ten Player of the Year, full stop. MSU played within themselves and tough, mentally, the whole game. A few breakdowns, we played a little anxious, and a few bounces went their way, and that was the game. Tip of the cap to MSU, they were really good.

Whoops. Honest mistake. Thank you for correcting. Comparing them today; Tillman has a more well-rounded game but Livers is the superior shooter.

MSU came in super focused because they knew they were short handed. They willingly played unselfish team Ball because they knew they had to do that to succeed. Seems like too often Michigan players were just dribbling the air out of the ball and there was minimal movement. Was a very frustrating game because player for player Michigan is far more talented overall. Just got outworked and played much more selfish. And also I think MSU outcoached Michigan today. It happens. Hopefully it won’t again but I don’t see Michigan winning at MSU if they got handled relatively easily in the 2nd half at Ann Arbor. Super frustrating.

Teske, is an elite defender. No?

On paper, I think most would say we are the more talented team but MSU is one of only 4 teams in the country that is top 10 in both offensive and defensive efficiency. They have clearly been the best team in the Big 10 by the metrics. They are probably more well balanced offensively in the way they are constructed.

They don’t have the depth they usually do but maybe that’s not such a bad thing considering Izzo has overused his bench at times. Now, they know who is going to play huge minutes every game and that the offense is going to run through Winston exclusively.

Obviously, a very disappointing loss but MSU had a lot to do with that. We can play better next time and I’m sure Beilein and crew will make some adjustments as to how we play them.

Winston is one of the best players in college basketball. They don’t lose much, if anything, with Langford and Ward gone because the offense just revolves around him a lot more and his efficiency numbers don’t suffer even with really high usage.

I’d like to see Matthews guard Winston a lot more next game and see how that goes. I think he’s better suited to check Winston than Simpson is because of his length and athleticism. On the plus side, Simpson has had three of his better offensive rating games in his career against Winston and there is nothing to suggest that won’t continue. I just think this year’s version of Winston is too much for Simpson to handle on the defensive end; especially when Matthews can also guard PGs.

I would put Matthews on Goins and then switch the 1-4 ball screens. Just me.

I think this is nuts. But it’s very Michigan fan. Our guy loses the one on one battle ONE TIME and it’s time to crown the other guy. The negativity in this fanbase sucks sometimes. Sorry, I couldn’t resist calling up that old quote.

But seriously. Z did not look like he had his legs under him the way he has most of the year. I also don’t know what was on his leg, if he cut himself shaving or what. Z was strangely passive and didn’t really get into Winston at any point. The whole team played scared and played the team embodiment of someone who shoots a three and just hopes it goes in. That’s not this team. The mentality was off yesterday. Let’s fix that and not do that again.

Exactly right he is. The quotes should have been an underline but I don’t know how to do that on an iPhone.

Statistically and fancy stats-wise Teske is one of the best in the land. Hence my surprise to how well a game Tillman had; I really thought Big Sleep would pretty much erase guy into a non factor. I think I underestimated the kid from my side of the state.

Tillman wasn’t scoring on Teske in one on one matchups really. His baskets came because Teske was a step slow recovering from the hedge all game long