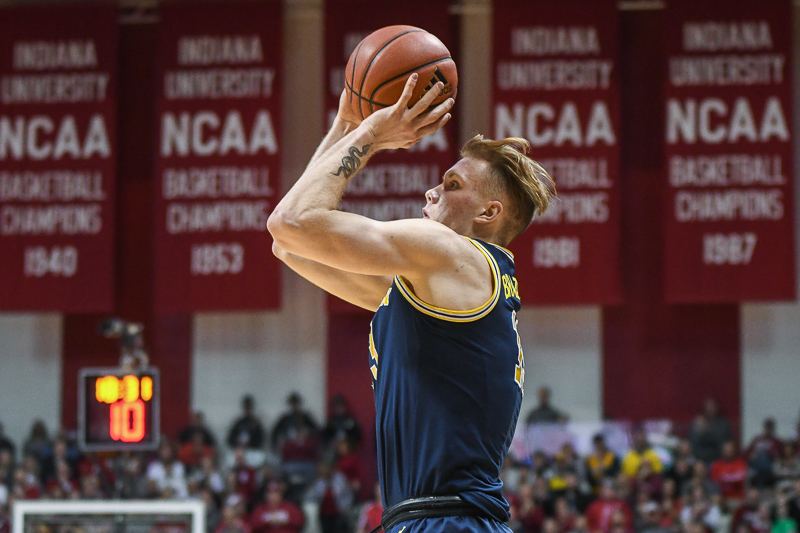 Michigan’s trip to Assembly Hall was scheduled for a 6:30 p.m. tip. Indiana didn’t make a basket until 7:07 p.m. The game was halted seconds after the opening tip for a broken shot clock. That resulted in a lengthy delay only to come to the decision...

I didn’t have a huge problem with offense today. They did get a lot of good looks. They just need a few more to go in.

#3 on IU seemed to be picked on all game by Michigan. He gave up a lot of baskets.

I was very happy to see Nunez picture perfect jumper connect today. Won’t be the last time we see him hitting deep threes.

Man I wish Teske would gather himself when close to the rim. He looks like the worst player in America when he’s off balance. A giraffe on roller skates. When he gets his feet set; he’s very good

19-1 with lotsa room for improvement.

#3 on IU seemed to be picked on all game by Michigan. He gave up a lot of baskets.

Brutal game for Justin Smith. Team-worst -26 in the 31 minutes he was on the floor. He also consistently got baited into shooting threes too.

The difference between Michigan and UNC on Kenpom (6 and 7 respectively) is bigger than the difference between UNC and #15 Texas Tech. Michigan is super close with Tennessee, but very solidly behind the trio of MSU, Gonzaga, and Duke. Those three are behind Virginia by about the same amount UM and UT are with Duke and co.

Matthews struggled to make a basket until he took a hard foul then immediately went on a scoring streak. Making 4 straight shots in a minute. Two free throws; a three; a long two. Hard game to figure sometimes.

Crazy that Purdue is at No. 8 in KenPom.

Purdue is 8th and Nebraska is 9th on Torvik.

I totally understand why they’re 8th in that system, but I think that it’s similar to the Wisconsin anomaly that people were kinda freaked out about during the Bo Ryan years. They’re not close to the 8th best team in the country based on my subjective eye test crap.

Watching a replay of the game now (wasn’t able to watch live) and my goodness, Archie Miller is so whiny. He just looks like someone I wouldn’t want to spend any amount of time around. Just a big baby.

Great comments on CM, absolutely spot on. As soon as I get down on his offensive he plays a great stretch of minutes.

We should all probably learn to accept the positives that each player brings to the team and not dwell on the shortcomings. They each have impressive skills that we tend to take for granted and instead focus on the areas of weakness. We all wish Simpson could shoot better from outside, but he does so many other things at a high level. Matthews could go scoreless and still dominate a game.

Would have been an incredible trillion

One IU fan was so exasperated with his team’s effort that he said, “if breathing wasn’t automatic, several of this team’s players would die.”

Many other IU fans are now demanding that Archie Miller be fired and replaced with Kelvin Sampson. Others insist that Brad Stevens is the right move.

Not long ago many M fans were insisting Coach Beilein be fired. Certain segment of every fan base are dumb and rash.

Matthews is very polarizing based on his high upside but little league mistakes. Reminds me of Zak Irvin in terms of how the fan base could get infuriated with him being off at times, but Irvin was still a very good player and scored over 1700 points. Matthews was an NCAA Regional Most Outstanding Player but just needs to minimize his carelessness.

He is in his second year. It can take awhile to turn things around. Have IU fans forgotten the state of the program under baggy pants?
He has a good recruiting class coming in and he gets Jerome Hunter back from injury.

Agree 100%. The team is still growing and getting better. Teske is a testament to hard work and effort. With that said, he has a ton of upside.