In his last 6 years, Crean won 2 Big Ten titles and went to three sweet 16s. He did miss the tournament a couple times, but I’m not sure Archie has done much in his career to bring confidence he’ll substantially better that. IU will also lose Morgan and probably Langford after this year (and Jackson-Davis isn’t signed, by the way). Archie could definitely turn things around, but it also could get late early.

As for UM, liked seeing the confidence, looseness - and some shots go down. X really did everything (except hits 3s), and is 12 for his last 16 fts, Iggy played great and aggressive, Charles two-way game was impressive, as was Teske’s. Kind of funny that this team is 19-1 and 8-1 in conference (with a loss on the road to the kenpom #10 team) and we’re all talking about getting back on track and needing a game like this, etc., but it sure was a fun game.

It speaks volumes where this team and program’s expectations are at when a 23 point victory at Assembly Hall feels uneven. All season long after some of UM’s double-digit wins, it felt like the team did not play particularly well. Tonight was one of those for me - I think a lot of it goes to the ruts that the offense is prone to at times. Seems like UM has a lot of room before they hit their ceiling (offensively at least). If they actually hit it or not, I’m not sure but the fact they have so much room to go should terrify the Big Ten even more.

Also, congrats to Livers for an Aubrey Dawkins Spectacular Missed Dunk in the second half.

If I remember we did get the rebound. My bad if we didn’t . It was a powerful one though. Glad it didn’t break the backboard. That would have been a long delay to fix lol.

Did you guys hear X call “short” on Durham’s free throw in the first half? I’m pretty sure that’s what happened, and we were up 17-0. Love it!

I definitely heard “short” during both attempts of an IU FT sequence, though I think they may have been from the shooter. And both shots were in fact short.

I’m almost positive it was X. He was yelling it on most IU free throws 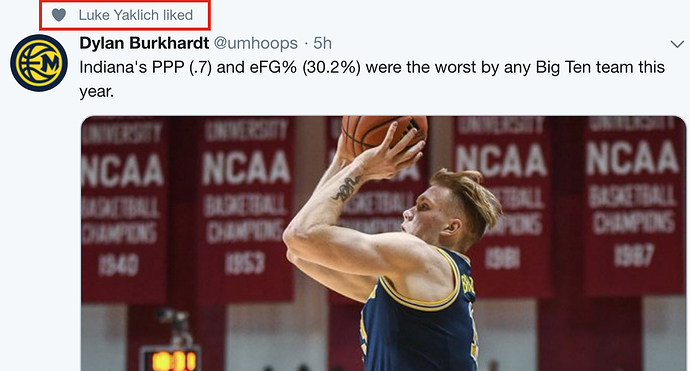 Yes we did… and if I recall correctly it was actually Livers.

Indiana scores 7 points in the last ten minutes of the game…OUCH!

I used to think I was a pretty knowledgeable fan, but I’ve learned more about hoops from this site than any other single source - all of which makes watching the games even more fun. The analysis here is really worthwhile - keep up the great work!

Indiana scores 7 points in the last ten minutes of the game…OUCH!

Well, at least they got that going for them! Which is nice!

No reason for the shooter to yell it on his first shot. It wasn’t a one and one.