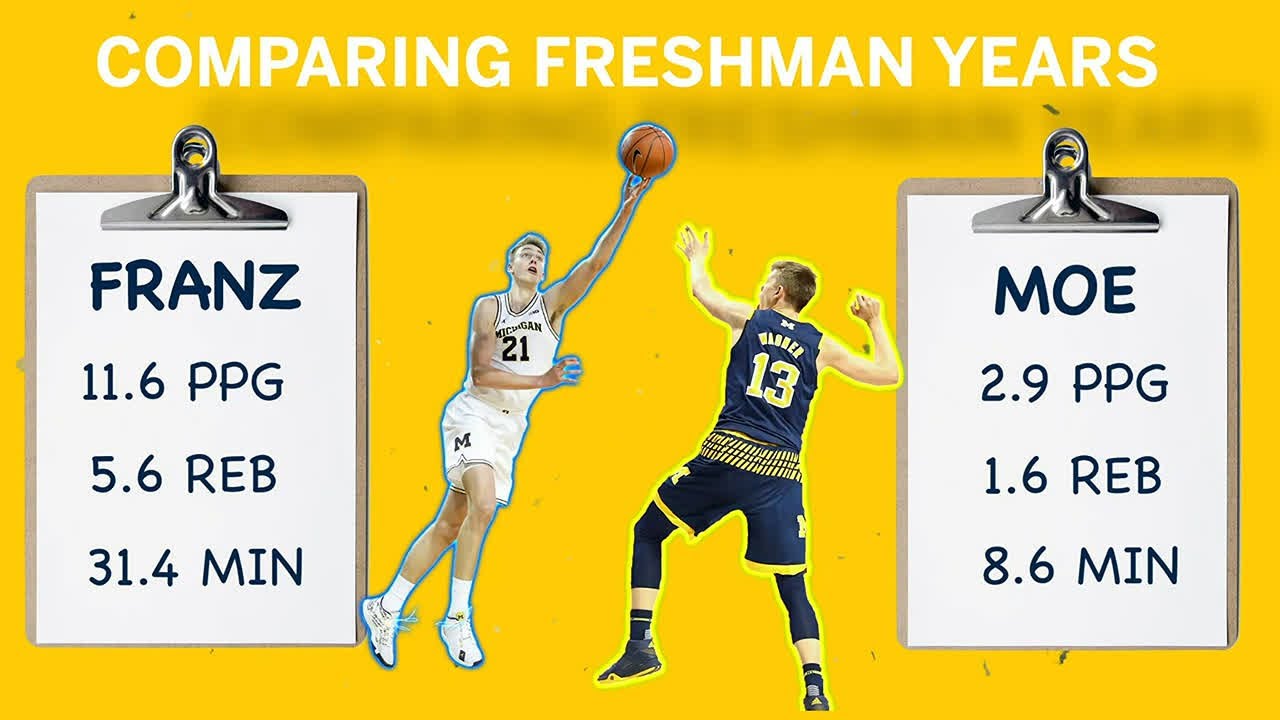 Great article from MLive on Franz. His Sanderson before and after pictures are impressive! 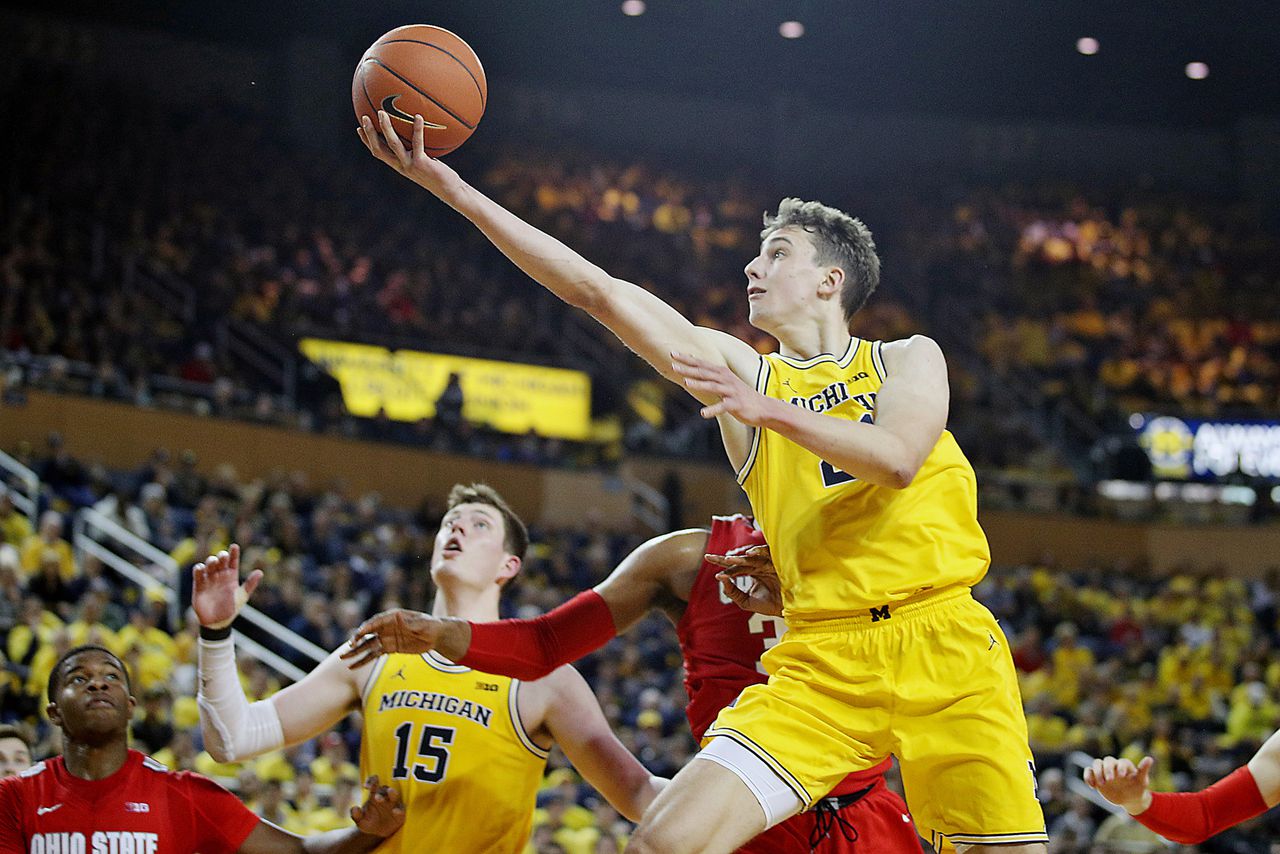 Franz Wagner: stronger, taller, and primed for a big season for Michigan...

The sophomore worked out with his brother Moe during quarantine. 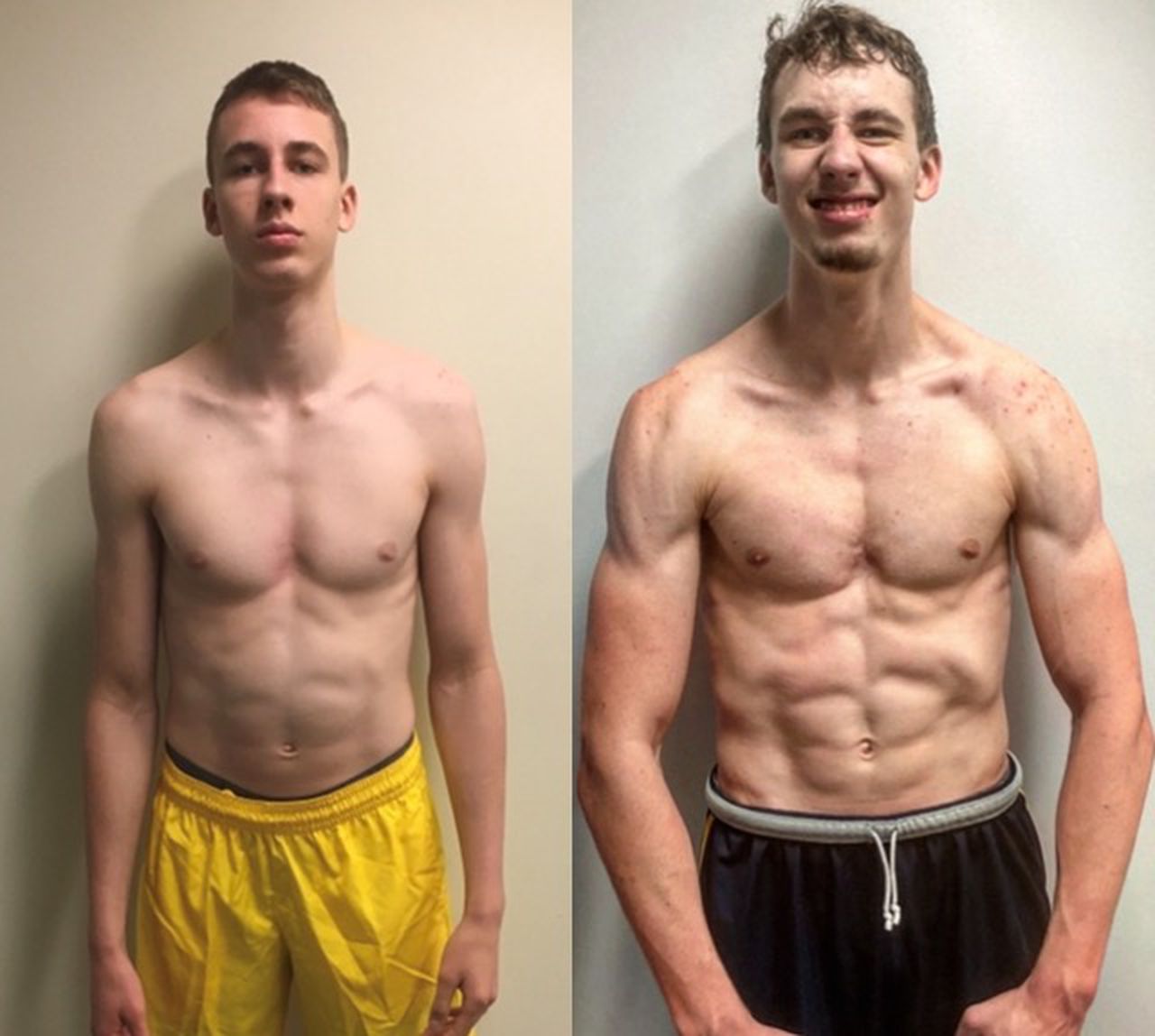 Looks at least 2 inches taller in the 2nd picture…

Wagner weighed 205 pounds at the start of last season. He is now 226, the ideal weight, Sanderson said, given Wagner’s height and position (guard/forward). He is squatting 85 pounds more than he was a year ago and benching 50 pounds more. His vertical jump is up an astounding 5.5 inches. He’s quicker and faster.

Franz is poised to be a breakout star this year.

Not bad, eh? That’s got to be up there with some of the best Camp Sanderson before/after results and he did it from a makeshift gym in the bottom floor of a townhouse in DC.

While I admit to loving these before/after Camp Sanderson pictures and I have no doubt that he’s in much better shape…I have now become wise to the tricks they use in these pictures with lighting and flexing. This is a classic Instagram trick.

I’ve seen a lot of these where the guys look totally jacked after Camp Sanderson and then you see them on the court and think, “eh…okay, I guess he’s in a little better physical shape.”

Don’t forget the facial hair to make it look like he has actually hit puberty. But if those numbers are at all accurate, it’s pretty impressive (+5.5in vertical !!!)

The adding 20 pounds part is pretty critical. Franz would pretty frequently lose his handle when driving through any level of contact and working in tight spaces, and I’ve had some skepticism about how his game translates to being a go-to guy because of that. Managing to become legitimately strong at your position would go a long way towards getting there.

I’d say he’s right there with Stauskas in terms of body transformation from freshman to sophomore year.

Franz is going to destroy everybody. Can’t wait.

I figured it’s time to talk about the 2021 draft and update my thoughts on prospects. A lot of this will just be trying to give shortened, concise thoughts on...

I expected to just skip to Franz and be done, but that was a super interesting article all around. Stuff like this regarding Jalen Johnson

I think I disagree with some others on points in Johnson’s game that generally seem like consensus thinking. For example, I think Johnson has some glaring athletic flaws that will hold back his slashing abilities at the next level, despite him also having some athletic traits that are very good. It’s easy to point towards his very good explosiveness off one foot, when given space, but the issue is he has trouble creating space, even when guarded by big men.

There is an interesting mechanical issue with Johnson’s lower body when moving that holds back what could be a more explosive horizontal athlete. When running, Johnson stays on the front of his feet, forcing shorter, choppy steps and putting a lot of pressure on his knees, causing him to stay upright in the upper body. The lack of ability to change stride length causes issues with allowing defenders to recover and stay in front of him, forcing him into tougher shots near the rim.

Perfectly puts into words this disconnect between “jumps really high” athleticism that the average viewer might notice more (GR3 comes to mind) vs someone like Caris LeVert, who has crazy athleticism in pretty much all the other areas.

The Franz info is a long way down on the scroll so here it is:

Franz Wagner – Michigan – Lottery/Mid First
Wagner is a player I’ll talk about, since I consider him the best returning player. The number of guys you’ll find at his age and size who posses the shooting, self-creation and basketball awareness that he does is a small list. He hits a wing-sized threshold that matters as well.

Pretty hard to fake the abs. Remember how X was absolutely ripped last year. In fact that may have been why he regressed some on d last year having to much muscle.

Fair point. And I was not trying to say he wasn’t jacked. Just maybe not so much more jacked then last year.

As for X…my theory is that he was expending so much energy on offense and couldn’t afford to foul either.

No mention of Isaiah Todd despite there being a section on G-Leaguers. He is supposed to be a 1st rounder, right? I see he dropped to 30th in 247’s rankings (not the composite), but I’m not sure if that’s based on an actual reevaluation or if there is a bias there against players who skip college.

He generally hasn’t been projected as a first round pick.

Interesting. I’d be salty about someone spurning Michigan for professional opportunities when they’re not a likely 1st rounder, but the position he’s at is so stacked already… it’s hard for me to project his one year as being better than what Livers+Brown give on offense. Probably a downgrade on D given high school film. Christopher is more of a “what if…” for me than Todd and I fully admit that there is salt there on my part.

That hasn’t always been the case, right? I thought he was top half of the first round since the NBA loves tall athletes with the infamous potential. Frankly, why would the G-League give out big contracts to guys that are second round picks? I don’t fault him for taking the cash, but if you’re the G-League just wait a year and you can stash him there for much less cash.

I never thought he was going to be a big contributor this year at Michigan unless Livers left…but odd that he’s a fringe prospect now.