Dylan this has nothing to do with this, but being a soccer guy how do you feel about the super leauge?

The Super League is the greatest thing to ever happen to football. I am disappointed that my favorite club, FC Bayern München, has decided to reject their invitation. It will be a money printing machine. I’ve got 3 reasons for it’s success:

I forgot to mention, the money will be absolutely bonkers yo. Imagine if you will OSU deciding to just form a national league with Bama, Clemson, and totally relevant teams like ND so that they didn’t have to share money with bums like Northwestern. This would only be good for the sport, the amount of money that would be flowing in would be jaw dropping.

And finally, it would be good because the money would so, so amazing.

man my blood pressure was rising for a moment. very well written

It will be good if your only criterion is making money - and only care about the teams involved. For everyone else it will suck.

I don’t think it will happen though. Not only is UEFA going to fight it, but no German or French clubs want to back this, apparently.

Bayern will join sooner than later

As the way it is now, there is really no fair matches between the big and small clubs.

One interesting thing is that those teams will still play in their national leagues, probably with their 2nd unit most of the time.

not totally irrelevant to basketball, which paved way with their own Euro league.

PSG and Bayern will join sooner than later, and UEFA has no way to stop this but to negotiate for a role.

Don’t think we should take this as a done deal. This is such an unpopular idea there’s bound to be significant backlash to it from all angles. There’s reports about the board members of Super League saying they anticipated this backlash. I can imagine Papi Flo is actually scheming the collapse of the UEFA/FIFA world order and has no care for the Super League itself.

Reports of a 60 billion euro lawsuit from UEFA after this was announced.

UEFA is angry because the announcement came right after they thought that they just agreed to the demands of those super clubs. Their lawsuit is merely a negotiation tool so that they can get a chunk of the revenue. At the end, fans want it.

Not gonna lie Super League is Super interesting. It is, as discussed, crassly a monetary thing. The national associations are all lining up against. Most fans hate it. Tv LOVES it. This is a true power play. Will be interesting to watch unfold. Globalization is dead? Long live globalization!

The talk of banning players from their national team is simply childish, as long as all South Americans and Africans will dress for theirs. A good PR move by the super league is to let football federations outside Europe get some revenue sharing.

Fans want… the lawsuit? Because I don’t think they want the superleague.

I’m a Michigan hockey fan, so I have some experience with this: Losing the local rivalries to get some more matches with big name teams further away costs more than you realize when you cook it up on a slack channel. This issue is much, much larger in domestic league play. All so that clubs that are already ridiculously rich, vacuuming up all the best talent, can get more.

OTOH I think the threats to disenfranchise players on those teams from the World Cup is absurd. 100 or so of the best players in the world missing from the World Cup? No way FIFA holds out on that one. It’s cheap stuff like that that almost makes me enjoy watching this super league idea.

Let’s be clear here: This is not good guys vs bad guys. This is UEFA and FIFA we’re talking about, not some people’s footballing cooperative. It’s bad guys all the way down.

OK, I realize this thread is about soccer which I really don’t much care about, but the words European and Super are in the thread title.

Is anyone watching the French Open? Oh, my goodness! To this point it may be the best match EVER!
The French announcer just got a standing ovation when he announced that the expected emptying of the stands as a result of a curfew wouldn’t happen. They waived the curfew! This match between two absolute legends is AB - SO - LUTE- LY Amazing!

OK, so Djokovic won the third set tiebreaker and now Nadal is struggling a bit on an ankle that he tweaked, but Djokovic, is truly playing magical tennis.

In case anyone tuned in after my initial comments, I must apologize. For three and a half hours or more this match was unbelievable. The third set tie breaker was epic, BUT after that it just became pretty anti climatic and not really the same. Djokovic continued to play inspired tennis but Nadal seemed to just, sort of, lose a step both emotionally and physically. So, if anyone tuned in based on my rather ringing endorsement, I’m sorry. The end just wasn’t worthy of the greatness of the tennis match up to that point.

Ernie, I am a big Nadal fan and Djokovic hater so this result has broken my heart and I have only you to blame.

I KNOW, my wife said the SAME thing! I don’t “hate” Djokovic but I AM a big Nadal fan. He was so focused early on and then all the way 'til the tie breaker. I DO think he tweaked his ankle a bit which definitely hurt him. Like him or hate him, Djokovic is phenomenal, though! 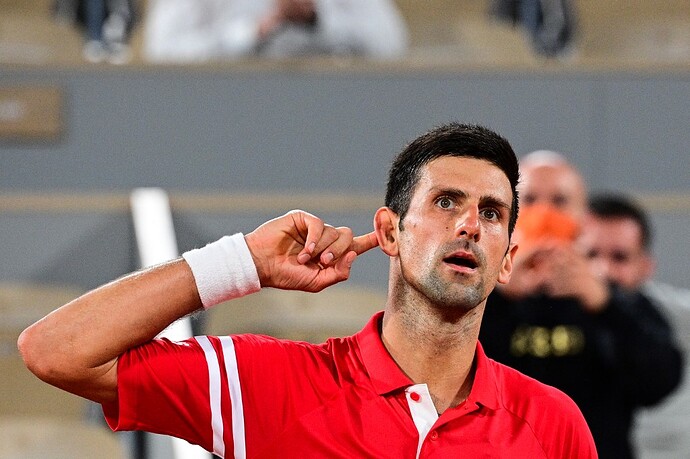 Phenomenal match at least through the first three sets. The third set especially was incredible, with the two trading blows every point.

Nadal seemed to break down in the fourth though. Gotta give the Djoker his due, beating Nadal on his favorite court is big time stuff. I saw a crazy stat - Nadal not only was 105-2 at RG before this, but in those 107 matches, he had only conceded two sets to his opponent four times. Djokovic has now done that three times to him (and beaten him outright twice).