Maybe someone smarter than me can take a look at it specifically but I feel like Duncan has gone cold ever since he fell hard on his hip a few games ago. Maybe something lingering?

Aubreys d is poor although he does seem to create a turnover or two but the fact is our d sucks and we have to out score teams. Of late Aubrey is only guy along with Irvin hitting shots. Duncan’s d is suspect to although he tries harder. As of right now he isn’t shooting well. I’d much rather take my chances with Aubrey right now than Duncan. I think we should switch their minutes for now and go game by game. Play whoevers hot between the two. But as of right now I’d like to see us running sets for Aubrey and giving him the minutes and looks. He’s a potentially explosive scorer and he’s a heat shooter. I’ve seen to many moments when we’re in a drought we hit Aubrey and he hits his first shot then we don’t look for him again and a minute later he’s on the bench.

Obviously I’ve been Audrey’s biggest fan on here but at this point we gotta go with the hot hand. If duncan comes off the bench and hits some shots then good leave him in but as of now he’s even missing open looks. Only positive is he’s getting to the rim.It’s time to see what some other guys can do because it’s clear this set up is not working against good teams. Hell im seriously interested in giving chatman a look too. We must out score opponents as built and as of now Aubrey will give us the best shot.

Sure. I totally agree with that. But they had Nik scouted early in his Sophomore year as well and he had to evolve (and did spectacularly). The difference is that even then Nik didn’t miss the open ones. I never saw Nik miss the way DR has been lately and while it may be blasphemous, I’d venture to say that DR is a better shooter than Nik. I think it’s more than just being scouted. Hope he pushes through it soon.

The only comparisons you can make between DR and Stauskus is both are white and are. shooters. Stauskus game is leaps and bounds above DR. The fan base really needs to stop thinking DR is going to be Stauskus.

A look at Robinson’s similar slump at Williams. 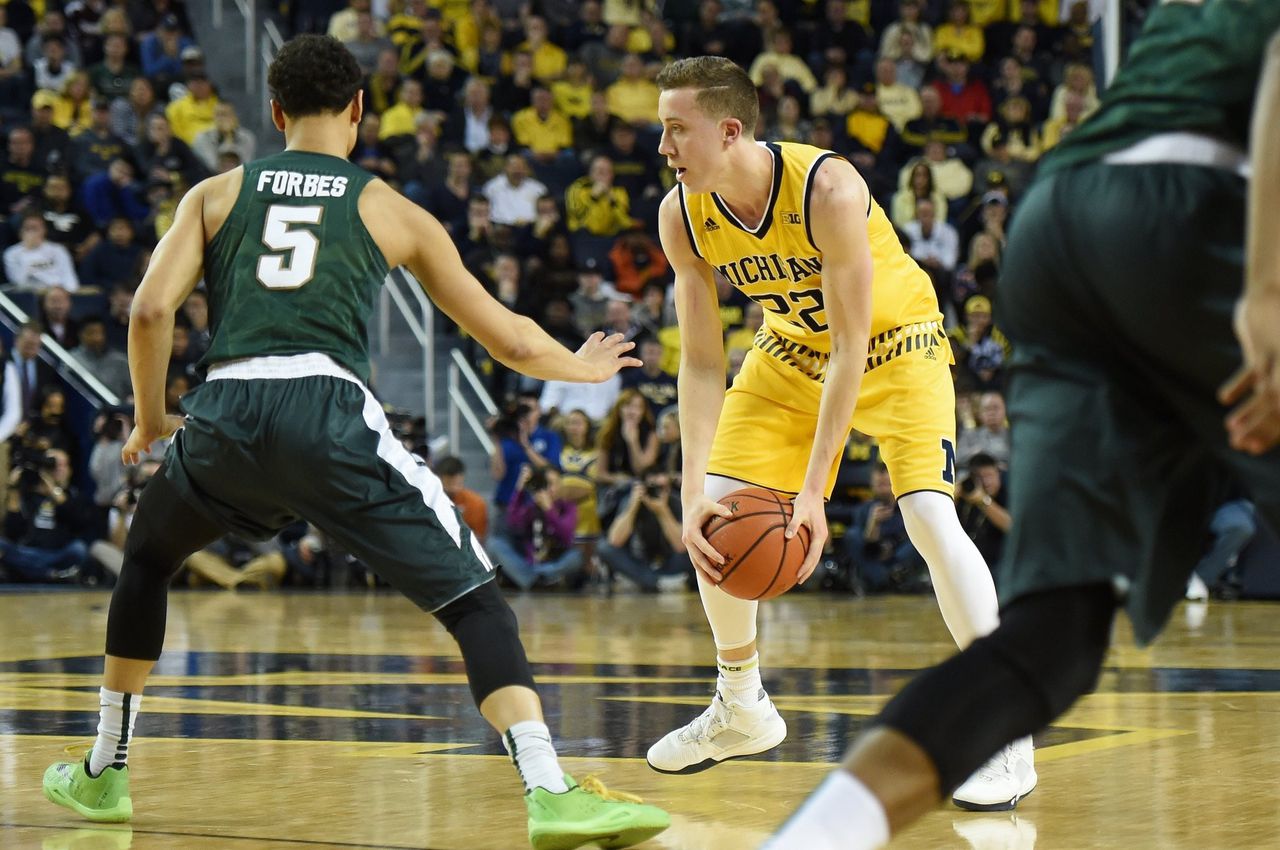 On Saturday, Robinson went without a made 3-pointer for the first time since Michigan's season opener against Northern Michigan on Nov. 13, 2015.

Most sane folks won’t think that. My point was on the shooting and on that point I think there are more similarities than differences. Maybe one big difference is that Nik had more of that Glen Rice killer instinct than DR has.

Amazing to see how people quickly forget how good Stauskas was. Stauskas was more athletic as mentioned before but he clearly could create separation and rise up over people to take a shot over people. Robinson is good at the pump fake, slide and shoot a 3 but he can’t really create his own shot, Stauskas had better handles as well. Tell me out of this brief 4 min video of Stauskas how does Robinson compare.

Comparing Stauskas’s sophomore year to Robinson right now is insane. As a freshman, Stauskas showed a few more signs of wiggle off the bounce, but the comparison is at least close to the same stratoshpere.

While Stauskas showed more in the PNR, he also got locked down and completely taken out of a few games in the Big Ten and NCAAs that year other than Florida. (He only shot 37% from three in Big Ten play as a freshman).

The jump that Stauskas made from his freshman to sophomore year was incredible though, one of the best I’ve seen.

When I step back and think about this…

I just wish I could go through a shooting slump and still be at 49% from downtown and leading my team. haha

Duncan is in his 3rd year. Why would anyone compare him to Stauskus in his first?

Duncan is what he is. A spot up shooter. He’ll never be anything more. He couldn’t shake Mquaid on Saturday. 3 years into college, you are what you are.

Duncan is in his 3rd year. Why would anyone compare him to Stauskus in his first?

Because he’s in his first year of major-college basketball? Are we saying that Duncan won’t improve over the next two years?

That’s exactly what I’m saying. He’s in his 3rd year. He will never be anything more than a spot up 3pt shooter.

What do you think Duncan will be noticeably better at? He’ll get stronger. He’ll improve his handle a little but he’s never going to be able to create separation at this level. He’ll never be a serviceable defender.

But Jalen Coleman-Lands is going to take the country by storm at some point, right?

Yes. Coleman will be 100 times the player Duncan is by his Junior year. Won’t even be a comparison.

Yes. Coleman will be 100 times the player Duncan is by his Junior year. Won’t even be a comparison.

Well Duncan has been the better player in year 1, will be interesting to compare the next two seasons.

Duncan is in his 3rd year of college basketball. He’s 3 years older physically and mentally. It’s not an apples to apples comparison.

Switching the subject slightly, I would love to see Duncan develop a move or two on the block. He’s 6ft 8. There are opportunities when a much smaller defender gets matched up on him. when that happens I would love to have a set or two that takes advantage of it next year.

Well Robinson is 2 years older than Coleman Lands. It isn’t far fetched to say a guy like Coleman Lands has more upside. Not to mention Robinson is 5 inches taller so they aren’t playing the same position.

Well I guess the question is would you rather have two more years of an older, more mature Duncan Robinson or three more years of Jalen Coleman?

Comparing these two since Michigan was recruiting both around similar times.