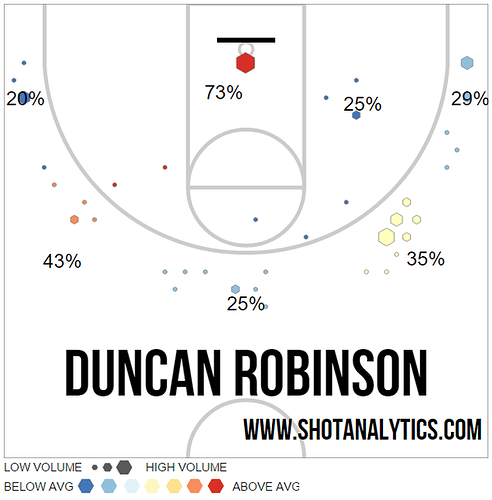 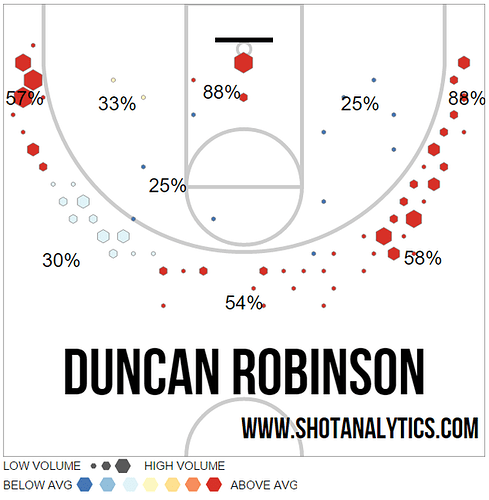 Wow that’s strange. His best/worst area are flipped. I wonder if any of that has to do with the way teams defend him?

Couple take aways from this. The first is, it was bound to happen. Was gonna be nearly impossible for a pure spot up shooter to keep up those numbers. Second, those charts lead me to believe that there are two things that have changed. One, Michigan has played better teams that are not giving up as much penetration leading to those corner kicks for Duncan. Two, teams are overplaying Duncan in the corner.

That second part makes it a key that rahk starts hitting some shots. When Walton/Irvin get that baseline the help is not going to come from the corner man on Duncan as it would normally. Instead teams are rotating down from the wing/top off rahk. He needs to start hitting shots again or at least driving off those kick outs and creating for others.

To take it a step further, in league play. he isn’t among the top 15 3-point shooters percentage-wise.

It’s just a totally different animal when you’re dealing with fatigue, focused opposing game plans, tall/athletic guys closing out on every shot and the cumulative effects of bad nights. Players aren’t robots; once you start missing, it can lead to a loss of rhythm and confidence, and more misses. A good example of that was against IU when Robinson launched a wide-open right-side 3 that hit the glass first. I bet he wouldn’t miss that badly in practice in a hundred attempts.

Also, a factor not to be overlooked is there aren’t nearly as many run-outs against a disorganized defense that generate open 3s.

I agree with the lack of run outs and better defense, but he’s also missing open looks which makes me point more toward tired legs.

With talk of tired legs and the constant discussion about the lack of agility, lateral movement, and athleticism can we look to Sanderson as perhaps emphasizing the wrong areas of need for the program? He always seems to get praised (in much the same way as Barwis did) but I’m wondering if there are other ways to turn these boys into men that could have more impact on the court.

It might be time to just say he can’t get open against better talent. He can’t even get away from McQuaid right now

It’s called being scouted by the better teams in conference and a coach with nothing to offer to get him going.

This is why I hate not having guys that can create. Vice versa there were Amaker years when we had guys that couldn’t shoot. But you have to have balance or it’s too easy for the defense to shut you down (either way).

Another thing that having Caris back would help. Caris will pull opposing teams best defender off of Duncan giving him better looks. Instead of having someone like Denzel Valentine or Raphael Davis he may have Bryn Forbes or Vince Edwards etc. on him. Makes a huge difference.

Honestly having guys who can penetrate and score would do the trick. It makes the defense have to pick their Poision. Stop the layups by helping off the shooter or enjoy giving up easy buckets. That’s why a slasher in the game of basketball is extremely important.

Right now I am having a hard time understanding why Duncan Robinson is still getting minutes over Aubrey Dawkins. Aubrey is playing better and I think he can do more then Duncan. Seeing the bench might just be what will get him going.

Dawkins isn’t going to solve anything. He’s not good. At least when Duncan is in, it forces the other team to stick a guy on him. With Dawkins, he’s what is known as a “self check”.

Once again you make no sense. I find it hard to say that Aubrey is not good when he’s been scoring. He has been one of our better guys as of late. I just don’t understand your logic.

He’s not good. He’s honestly been one of our worst players lately. He is arguably the worst defender in the big ten. He doesn’t rebound. He has no handle. He takes bad shots. Should I go on?

He’s scores he’s productive on offense he creates for himself. He gets in the double digits most games

He does none of those things consistently. Not a single one.

He’s cracked double digits 4 times in big ten play and all 4 of those, he barely cracked it. He averages under 1 assist a game and just over 2 rebounds a game.

If you think he creates for himself I need to know what you consider a basketball player creating for himself.

Like most of the team he is a catch and shoot guy and gets an occasional dunk in transition. He breaks absolutely no one down off the dribble. He brings little fear to any team Michigan plays. His job is to stand in the corner and knock down the 3.

Don’t get sucked in like I have been talking only offense.

What about Aubrey’s defense? He is an absolute liability on that side of the ball. He has no clue where he’s at off the ball and on the ball, he has cement in his shoes. It’s depressing thinking about where he’s at right now as a basketball player.

Well remember “That’s JB’s system” defense is optional. That’s why it’s never talked about because it’s just a given that it won’t be good. That’s pretty depressing to think that defense is an after thought.

One thing that has absolutely killed JB on defense is the charge circle and how they call charges. He has really struggled finding the fix for the lack of charges being called.