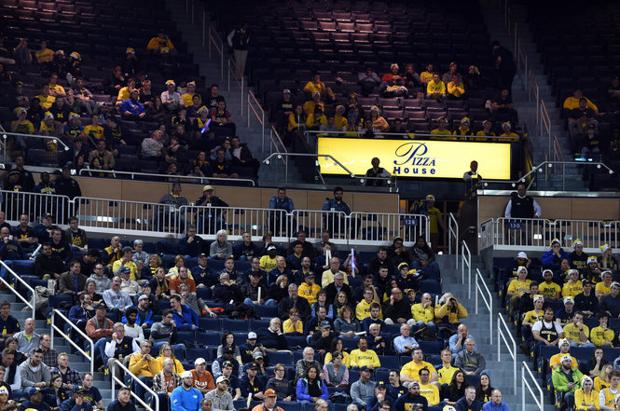 The environment has floated somewhere between stale and stagnant.

The attendance question is interesting… bottom line is that Michigan basketball fans are pretty fair weather.

Think about December of 2011 before Michigan had won that Big Ten title and the crowd looked fairly similar to what it does now. 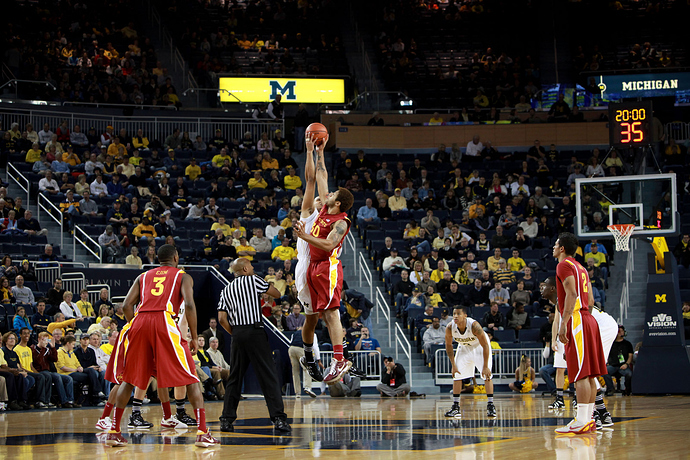 A year later against NC State… 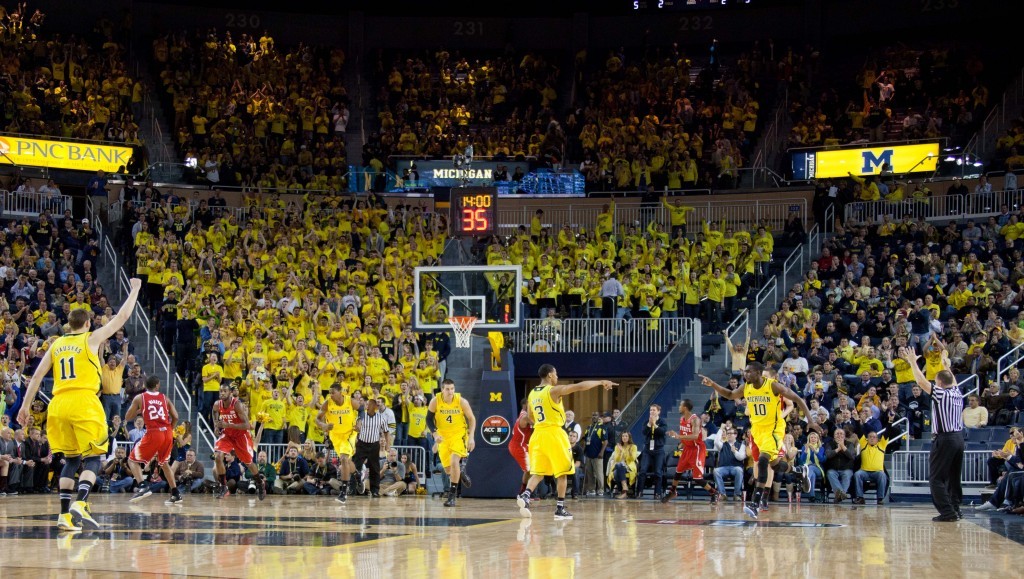 Let me first say that I appreciate the talk here so much more than the back and forth with the trolls and knuckle-draggers that defines the MLive experience.

I think the number of tickets sold is OK for a team of this level of expectations. That said, I think that the no-shows are a bad look.

I know the athletic department might be reluctant to give away unsold tickets, but I’d like to see a more concerted effort from the Athletic Department to get season ticket holders who do not use their tickets (especially for the guarantee games early in the season) to donate them back to the department for giveaways to young fans. 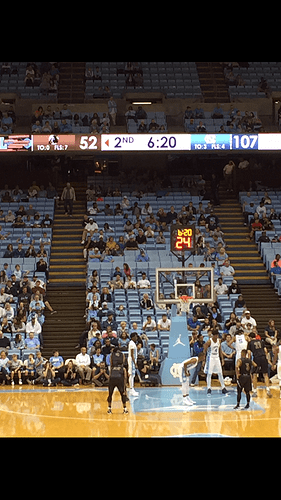 I took this picture earlier this year at a UNC game because of the score, but the attendance should also be noted. So far this year the most they’ve filled up the stadium was 65% against Radford, and this is a blue blood program ranked in the top 10 coming off an ACC championship and run to the title game. When the games are guaranteed it’s such a big battle these days to make the game experience more worth the comfort of the couch. Obviously there is a difference as Michigan has faced two teams with name recognition in Texas and VT and I think that’s due not to the place the program is currently in, but where it is in comparison to a couple years ago. I think if Michigan remains a tourney team with the occasional year of Big Ten contention it will slowly come back to what we would expect. Also it would benefit them to schedule more traditional basketball blue bloods for home and homes. Some of the greatest Crisler atmospheres I’ve been at were 2008 Duke, 2010 UConn, 2011 Kansas, and 2013 Arizona. The UCLA game next year is good but I don’t see why we’ve gone 3 years with one game against Syracuse as the only “traditional power” we play at home.

Another issue is probably what we were talking about in another thread with the offense over the last 3 years just being so ugly. Get a guy who can create off the pick and roll to go with what I think will be a fantastic frontcourt for the next 2 years (Wagner/Wilson, Teske/Livers) and add in Matthews for what could add up to be a much more balanced and exciting offense than what we have. It would help to win BIG against solid teams at home. The 30 point blowouts against Iowa, Northwestern, Nebraska, etc. were always some of the most fun to be at. Sorry for this wall of text and I don’t think I formulated my thoughts exactly how I wanted but that’s just a rough sketch of my opinion.

Desperately need an athletic creator off the bounce that draws help D for the future.

Yes! And offer them for a few bucks to people who work at the U! It takes thousands of dedicated, often underpaid employees to clean and manage that place–there is zero reason that the arena has to be empty.

As a former employee of the University, I can get behind that.

That’s surprising about Carolina. Doesn’t the dean dome seat about 8,000 more people than Crisler, though?

Texas game should have been a draw for fans, no?

The game being at 9 on a Tuesday night could have stopped a lot of workers/families from coming.

Tuesday was embarrassing from an attendance standpoint. Not only were there vast stretches of empty seating but, as usual, non-students tend to arrive literally at tip-off.

We didn’t come particularly close to selling out after National Championship runner-up and Elite 8 years. While the student attendance tends to fluctuate based on performance, there simply isn’t a strong alumni base for basketball. Compare Michigan and MSU–we draw for football no matter how good we are and State can’t sell out after a string of strong seasons and a BCS appearance. The reverse is true in basketball.

It is pretty difficult to compete for high end recruits when our “basketball arena experience” pales in comparison to those of the schools we are competing with---- particulary MSU and Indiana. Now to change that reality may well require bringing in “that kind” of coach—a Harbaugh-type, who might stir the apathetic to action. And I say that as one who truly appreciates what a good coach and man John Beilein is.

But it’s not like Michigan is the only team that has to play 9pm games for TV.

This is why I have a problem with the article. BQ should have taken a look at how other schools handle attendance issues overall and compare that with Michigan. Do more than just look around the arena and think “damn, this place is empty” and then write a piece that reflects that observation, adding few hot takes speculating on why.

Okay so speaking of this, I’ve only been to one game this year but is it just me or did it feel WAY more gimmicky than usual? I don’t even know how to describe it, and maybe the new announcer’s overly exited tone the day of the OSU game just made me annoyed, but those of you who go to Pistons games probably know what I mean.

BQ should have taken a look at how other schools handle attendance issues overall and compare that with Michigan. Do more than just look around the arena and think “damn, this place is empty” and then write a piece that reflects that observation, adding few hot takes speculating on why.

I’m not gonna lie, Quinn has definitely fallen out of favor with me over the last year or so.

I’m not too concerned about Tuesday’s game. It’s coming down to the end of the semester, a latenight Tuesday game, it doesn’t feel like basketball season yet and we’re playing Texas - good, but a typical kid isn’t going to think of Texas as a basketball school.

I’m sure football success has dampened the excitement. I mean, a few years ago we were coming off some rough seasons of football so I’m sure kids were loving the basketball hopes.

Stay consistent with success in basketball and get some playmakers on offense!

A lot of those empty seats are probably fans whom left early due to the score.

Anytime, attendance comes up, I have to repost this link haha. http://www.mgoblue.com/tickets/students-bkm-season-plan.html

As far as students go, I wouldn’t expect the lower bowl to fill up until January 26th versus Indiana. So that could be a decent atmosphere. Tougher to speak on overall attendance, but I think the attendance we’ve seen will reflect the attendance the rest of the season, unless Michigan manages to go on a run during their easy schedule post UCLA. They may be favored for 8 straight games post-UCLA. If you can go on a run and start 6-1 in the B10 or so, I think non-student attendance will improve just because the season ticket holders will feel a little more motivated to attend games.

A lot of those empty seats are probably fans whom left early due to the score.

But they weren’t… it was like that the whole game. We get a ton of free stuff for scoring 100 points so people usually stay to the end at blowouts. We’ll see how attendance is at the Tennessee game, the only home game with name recognition.

This topic gets my blood pumping. I’m an out of state season ticket holder. I pay for season tickets because I love Michigan and I want to support the team. My tickets have been used for all but two games so far this year. We have to stop blaming season ticket holder no shows. You know why my tickets went unused for two games? Because I couldn’t find a friend or family to TAKE them for FREE and no one bit when I posted them for $6 on Stubhub. That’s not my fault and I refuse to be blamed for this problem when I’m among the few who give the athletic department my money for season tickets to show my support. Love this team, love this blog. PS anyone want tickets to Tuesday night’s game 9PM game against CENTRAL ARKANSAS?? Sec 204 row 33 seats 5,6. Oh, and winning will solve this problem as the pictures and history prove. Go Blue!

Do you feel you are the typical season ticket no-show?

I find it hard to believe other season ticket holders aren’t trying to move their seats if they can’t make it to a game. And, based on the volume of tickets available on stubhub for a fraction of face value I would guess I’m not alone. Is there a perception that season ticket holders don’t care? Because that makes zero sense when they committed to buy 19 games worth of tickets…