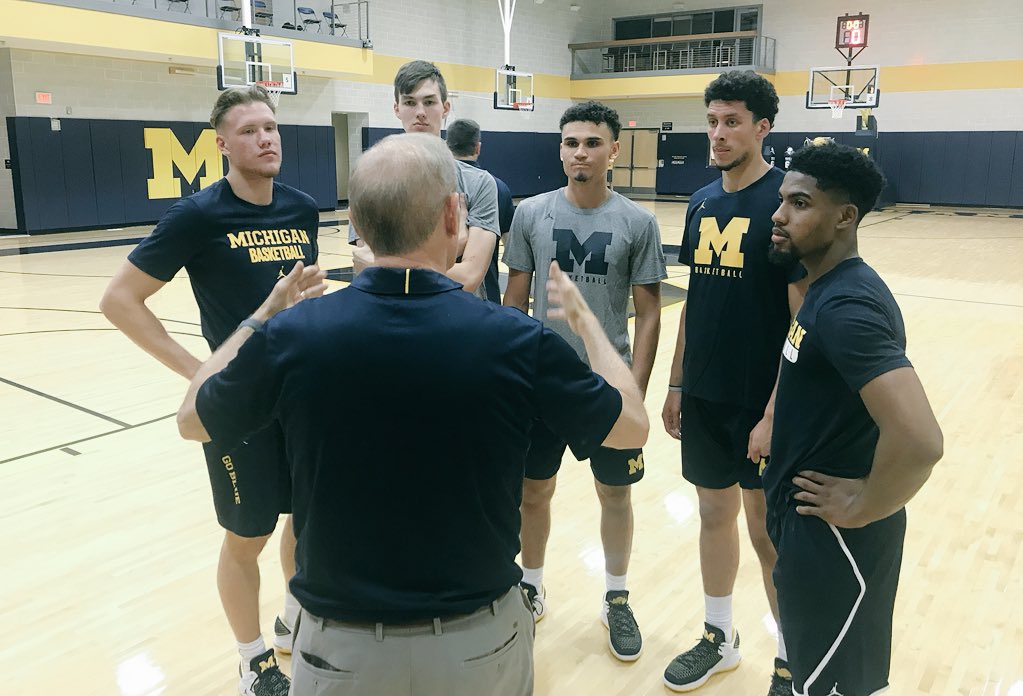 Brandon Johns, along with the other four members of Michigan’s 2018 recruiting class, arrived on campus last weekend. An East Lansing native, the second-ranked kid in the state, Ann Arbor wasn’t the place he was supposed to end up. Johns’ 247Sports...

How about this as a comp: Jerod Ward?

Good comp. Hope to do without the injuries which I think limited how effective Wards career at Mich was.

Jerod did not have the handle or athleticism that Johns has.

“Probably the best way to explain it is with the visits, with conversations, watching the style of play, looking at where he would be playing at Michigan versus how he would be utilized at Michigan State,” Mayes said. “I don’t really think Beilein cares whether you’re a freshman or a senior, if you earn the (playing) time you’re gonna get it. That’s not the case everywhere. And so I think it was just — it was a little bit of everything.”

Sounds like Johns could’ve told you who Izzo was going to use in the middle of Cuse’s 2-3 zone.

Brandon is the guy I think will make the biggest impact as a freshman and might also end up having the best collegiate career. I would not be surprised to see him become the starter or play starter minutes this year.

That quote is gold

Yes! Love the jump stops. Love how he moves his man before making his move. Love that he can shoot. He’s big too, isn’t he? This is going to be an exciting year!

If Johns starts, decent chance he’s one and done imo.
I don’t expect him to start.

Brandon is the guy I think will make the biggest impact as a freshman and might also end up having the best collegiate career. I would not be surprised to see him become the starter or play starter minutes this year.

If Johns starts, decent chance he’s one and done imo. I don’t expect him to start.

He’s going to be really good if he starts. If he beats out Livers. I’ll be pleasantly surprised should it happen.

Not only that but he will also be ahead of Brazdeikis. It will be very impressive of young Johns

If Johns starts, decent chance he’s one and done imo. I don’t expect him to start.

Over/under 3.5 Michigan “wings” that are better than Michigan State’s best “wing” this season. I’ll take the over.

Basically how many of Poole, Matthews, Iggy, Livers, Johns will be better than the best of Josh Langford, Matt McQuaid and Kyle Ahrens.

Langford is probably better than all but Matthews. That 3.5 sounds way optimistic.
So I will take the extreme under.

Without Jerod’s knees I hope.

Disagree! If you say Matthews is better than Langford, I say Iggy and Johns will be better than McQuaid and Ahrens alone not even counting Poole and Livers in the mix. I say over as our group of wings vs Spartys.

A mid-range chucker that shot the same percentage from the field last year as Jordan Poole, despite playing a much more consistent role next to 2 lottery picks and the conference’s assists leader.

Put another way…I expect zero of MSU’s wings next year to make the NBA some day (maybe Bingham?) Poole and Matthews are already on 2019 boards and Iggy/Johns are decent bets to get there someday as well.

The so called experts say if there is a one and done in this class it will be Iggy.

I disagree. Langford is a good player. I would take him today over the rest in a heartbeat.

Maybe under JB. I have major doubts the current Izzo iteration ever gets there.