Forgot to create this one…

Bryant McIntosh is one of my favorite players in the league to watch. He was cooking tonight for NW

I know they don’t have any high value wins but I sure hope Northwestern makes the dance! 15 wins already!

Minnesota is making a real push for the last spot in the weekly power rankings.

What in the world is going on up there? Losing back to back games by 25 against Northwestern and Nebraska? They are approaching Rutgers level at 198 in kenpom.

Side note: Decent setup for Michigan headed to Iowa this Sunday. Hawkeyes are at MSU on Thursday night.

Also think last night’s win could be big for MSU… They have a pretty easy schedule from here on out.

Rutgers leading OSU in Columbus late in the first half, 33-26.

Big game in east Lansing tonight. Both teams off to good starts but Iowa is lighting it up and leads 17-11 at under 16 timeout. Gesell with two fouls but Clemmons playing well in his place.

With both uthoff and uhl, Iowa has some really terrifying matchups on the wings

state having huge turnover issues. Iowa gets their hands on a lot of passes. Refs calling charges all over the place tonight

Hopefully Iowa is getting all these threes out tonight. Wow

This is beautiful. Izzo is about to lose his sh!t in the locker room. Would love to witness it.

Missed most of the first half… Good grief. Can’t remember many times someone has put it on MSU at the Breslin like this.

Iowa lit it up in that first half but state contributed a lot to that. Very soft defense and gave up some offensive rebounds. Offensively state was throwing the ball all over the place. No idea what’s going on with Valentine. He was barely noticeable out there. 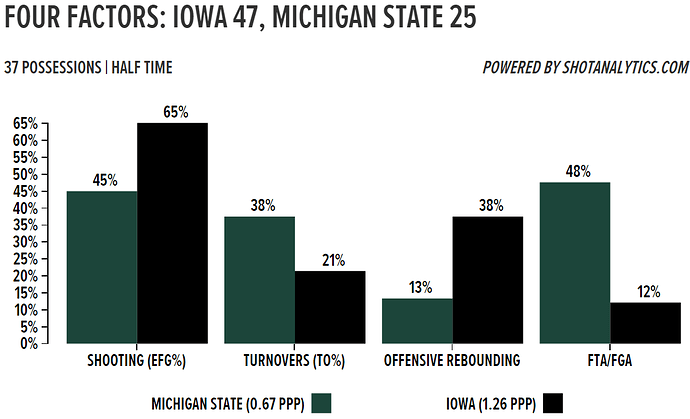 There were a few MSU posters at the DetNews this morning saying we had only placed them a step closer to the B1G championship by beating Maryland. Perhaps not.

Iowa is a veteran team, maybe this is their year.