Big Ten coaches rank the best jobs in the conference 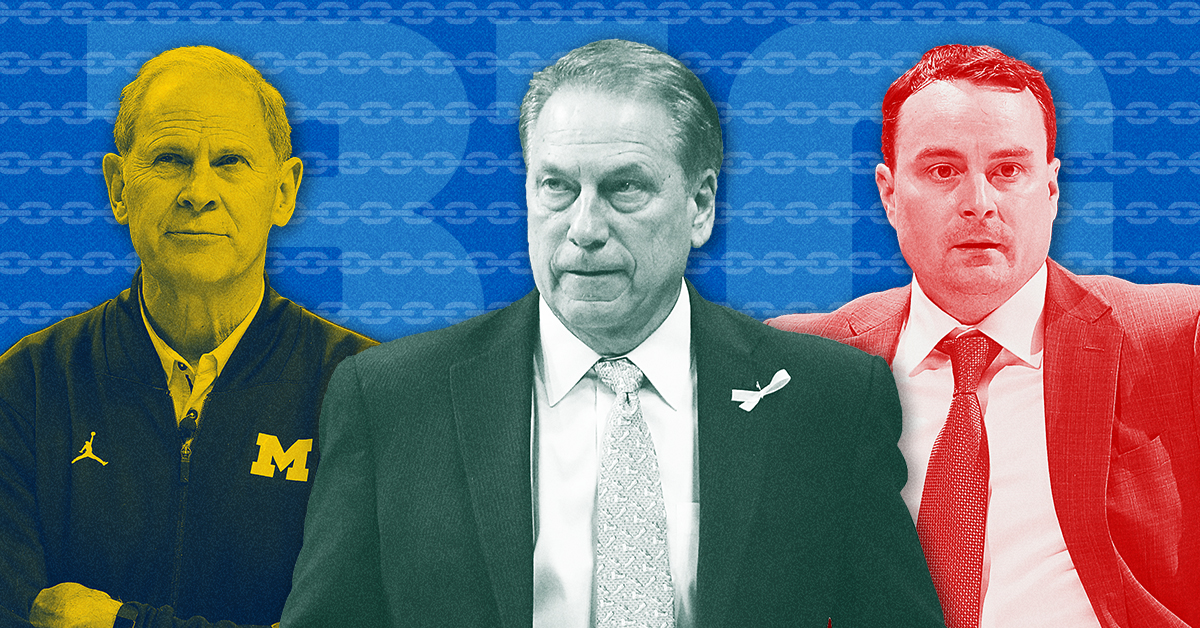 This is the fourth in Stadium’s “Conference Chain of Command” series in which we polled a handful of veteran coaches in every league to determine the best JOBS in each league, all the way down to the ones that are the most difficult. This week’s... 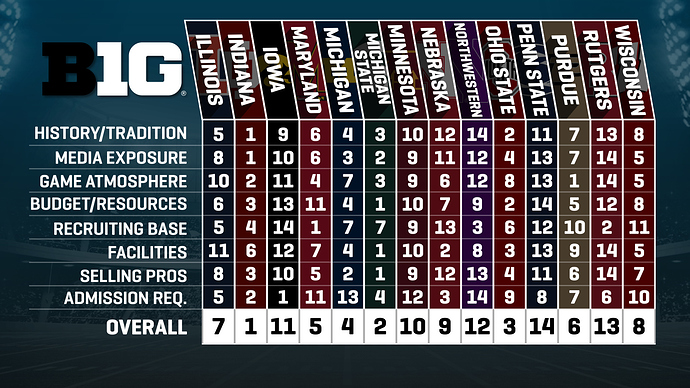 Dang, that academic rigor is really holding us back

Interesting list but I definitely think there is some bias towards certain schools when you only poll b1g people(the arrogant quote about um while true says it all). I also think some people combined various criteria. For example while MSU probably has the best game atmosphere their facilities are far from the best so I am guessing a lot of the voters factored in game atmosphere when rankings facilities.

I think facilities are more binary… There are schools that have made upgrades/practice facilities/etc. in the last decade or so… then there are those that haven’t. Nebraska might have TVs above a urinal or something on a YouTube video, but I would imagine there’s not a huge difference between everyone’s practice facilities.

My only gripe is wondering how OSU has better tradition in basketball than Michigan. I see OSU had success in the 60s but Michigan went to a final four in the 60s, 70s, 80s, and 90s. And of course the more recent ones.

I wish this table included “threat of scandal”

I wish this table included “threat of scandal”

That has a lot more to do with the coach than the job.

Michigan State is such an overrated job. Years with a Big Ten Championship or Elite 8 pre-Izzo:

And if people want to say I’m cherrypicking, only 86 and 90 have additional sweet 16s. That’s 100 years of history pre-Izzo with 5-7 good years. And two of those years are because a top 5 all time player just happened to be born in Lansing.

The MSU job SUCKS and it is a testament to Izzo what he has been able to build there, even if he might be losing it a bit. The MSU job always gets ranked 2 or 3 on these type of rankings where I wouldn’t even consider it until you got to the #5 spot.

Good point. I guess I took this as a hypothetical “what job would you want right now”, and I certainly would be nervous to take a job at a Kansas or a Louisville if I was an up and coming coach, knowing postseason bans could be on the radar. Not as much worry in the Big Ten, but I’d loooove to see those results

The most important history is recent history though. At this point, the MSU job is all about what Izzo has built. The fan support, facilities, etc. is all there.

I think that aspect has merit but is overrated, MSU has institutional disadvantages (money flow, being the #2 brand in its own state, East Lansing) that can only be overcome with an elite coach. If Dane Fife gets that job next, I think MSU morphs back to what it has been historically. There’ll be a residual bit of recruiting momentum, but it won’t last for long unless MSU hires another high level coach quickly.

Say Izzo has been retired for 5 years, and you are a random coach choosing between MSU and Illinois. Which job do you take? I feel like this is a super easy decision to go to Illinois.

I think along similar lines. Maybe the most impressive thing about the um job is the high level of success we have had under various coaches over the past 50 years. Um also had that succces while treating b-ball like a step child and barely committing resources to it and that’s clearly not the case anymore.

The knock : “Football school … And the fans are wine and cheesy, a little arrogant.” – Big Ten assistant

I get the first point. I don’t get the second point. Even if it is true, how is that a negative for the job at Michigan? I get how it’s a negative if you are a butthurt assistant at a B1G rival.

Illinois can be an overrated job. It’s certainly not “the brand” in Chicago, even the way MSU is in much of Michigan (even if it’s #2), nor is it even closer to Chicago than a bunch of other schools. By the way, I think MSU has higher athletic revenue than Illinois. And Izzo will have been there at least 25 years, probably more, when the next guy steps in – I’m not sure that’s “recent” history in college sports terms, especially when you had Magic 15 years before that.

Anyway, we could debate whether certain jobs are better – I think OSU, Michigan, and others, would have a fine argument – but I don’t think that MSU sucks and Illinois is really good accurately reflects the situation.

This wasn’t the case before Weber and Groce tanked the program. IMO, recent success is very fickle. Illinois has had a series of bad coaching hires, have been a disaster for years and now every player appears to hate their new coach, yet he pulls in a very good class including a near 5 star player in his first full class.

What wasn’t the case? In 21 years, Lou Henson made it to the S16 4 times, including just one F4. He won one (shared) Big Ten title. He missed the NCAA tourney 3 of his last 6 years. Bill Self got Chicago kids, but he also did so at Kansas, and it probably says more about him than Illinois, who got some over the years, but it’s not like all the Isaiah Thomases and Marc Aguirres were going there before.

I’m not saying Illinois is a bad job, or doesn’t have potential, but it’s relative advantages and disadvantages compared to MSU don’t seem so clear or extreme to me.

I’m never a big fan of writing off the most recent 20 years when debating the prestige of a program’s history.