Yeah Painter is too low at #4. What has Holtmann done to deserve to be higher? And Gard just won COY, but before that many were wondering if Wisconsin was on the downswing in the post-Bo Ryan era.

Matt Painter “doesn’t recruit enough” to get into Tim’s top three, but Greg Gard, who is a worse recruiter, is number two because he “doesn’t need to” be a good recruiter? Huh?

Laughing at Gard at No. 2 but also think that some of the revisionist history about Thad Matta’s tenure at OSU is comical. Holtmann seems like a good coach but Matta was incredible. He really defined the Big Ten for close to a decade.

Chris Holtmann is going to do better than this? Yeah, I don’t buy that. 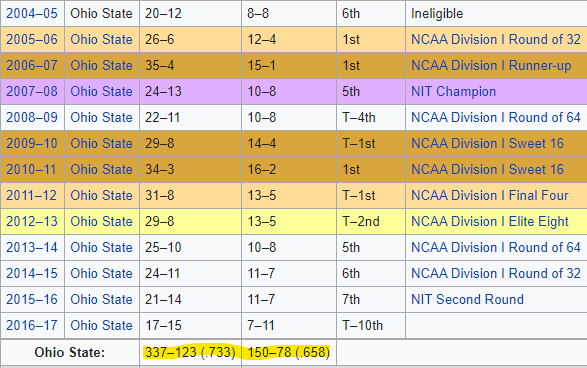 Yep there was a point in time where I thought there was a good argument that Matta was the best coach in the country. Then the back issues happened and recruiting fell off a bit.

Yeah people who areexpecting Holtmann to be better than Matta are essentially expecting Final Fours once every 4 or so years and a National Title at some point.

Holtmann is a good coach, and he very quickly stabilized OSU and has turned them into a team that can compete for B1G titles again. That being said there are some definite questions about him:

Look at OSU’s current transfers and you see that. Porter and Sotos were mediocre MM players that project at best to be solid rotation players. CJ Walker is a solid PG but a 107 ORTG on 18% USG last year doesn’t seem like someone you build a team around. Sueing put up great numbers at Cal, but that was when the PAC-12 was a MM level conference and his team was awful, so how do those numbers project to a B1G team that is supposed to be contending. Towns is obviously the crown jewel transfer, but he’s also an up transfer who has missed the last 2 years due to injury.

I feel like the best transfers in the current landscape are good players but either limited in upside or have some major flaw that will probably hold them back (IE Mike Smith and his size). The best way to get an elite player is still through recruiting. On the surface Holtmann has done that well (#1, #6 and #1 classes in the B1G in 2017-2019). However from those 3 classes OSU had 7 4 stars to 247, and only 2 are still on the roster (Kyle Young and EJ Lidell). And the 2020 class consisted of 2 3 stars (#10 in the B1G). Holtmann has definitely made OSU good again, but I don’t think he’s shown yet that he can make OSU great again.

Coaches absolutely should use the transfer route these days but I also dont think a program of osus caliber should be using it to the level Holtmann is. Seems like they literally go after any half way decent transfer. That model can provide a good floor but to win at the very top(where Matta had it) you better recruit or develop pros from the high school level.

Holtmann hasn’t proved much yet. He may in time.

Unless I’m missing someone, I’m pretty sure Holtmann hasn’t put one player in the NBA in his nine years as a head coach. The only top 50 recruits he has signed (Carton, Liddell, Gaffney all from last year’s class) haven’t exactly worked out. He’s won 20+ games seven straight years, but lost at least 9 every season too. He ain’t touching Matta.

I guess Beilein being honest with Carton that he was going to behind Simpson made him reverse course.

I think Holtmann gets a lot of love because when he took over for Matta, he propelled them to a pretty surprising above average season and KBD became an absolute stud for that team. So he took a program on the downswing and made it above average.

Problem is he has been just above average since then. There are some red flags as noted above. His ceiling may just be upper middle pack of B1G and a 4/5/6 seed in the tourney. Not bad but when you compare with the run Matta had at his apex he just isn’t there.

Also don’t write Lidell off yet. He came on strong to end last year, he’ll probably be a good player this year as an undersized 4.

Agreed. First impressions matter, and he made a great one. He hasn’t been around long enough for the glow to wear off. But he’s coming up on year 4 and if he’s not able to take the next step to having a great/elite team soon he’ll start facing some criticism. He’s proven to be a quality coach who should maintain OSU as a consistent top 25/top half of the B1G team, but as of yet he has not shown he can elevate the program to the next level.

It’s been pointed out that OSU plays a weaker Nov/Dec schedule, which has helped create expectations around Holtmann.

I don’t think we know either way. You can neither anoint nor write off.

I agree with you, he was exceptional. Three Final Fours speaks for itself. And his teams always defended JB’s offenses really well.

Doesn’t get as much credit due to some of the monsters he landed but last I check that’s part of his job too. Was a beast at Xavier too

Not including players in the draft or (obviously) newcomers.

James Hawkins of The Detroit News provides an early look at the top talent that will be back in the Big Ten next season.