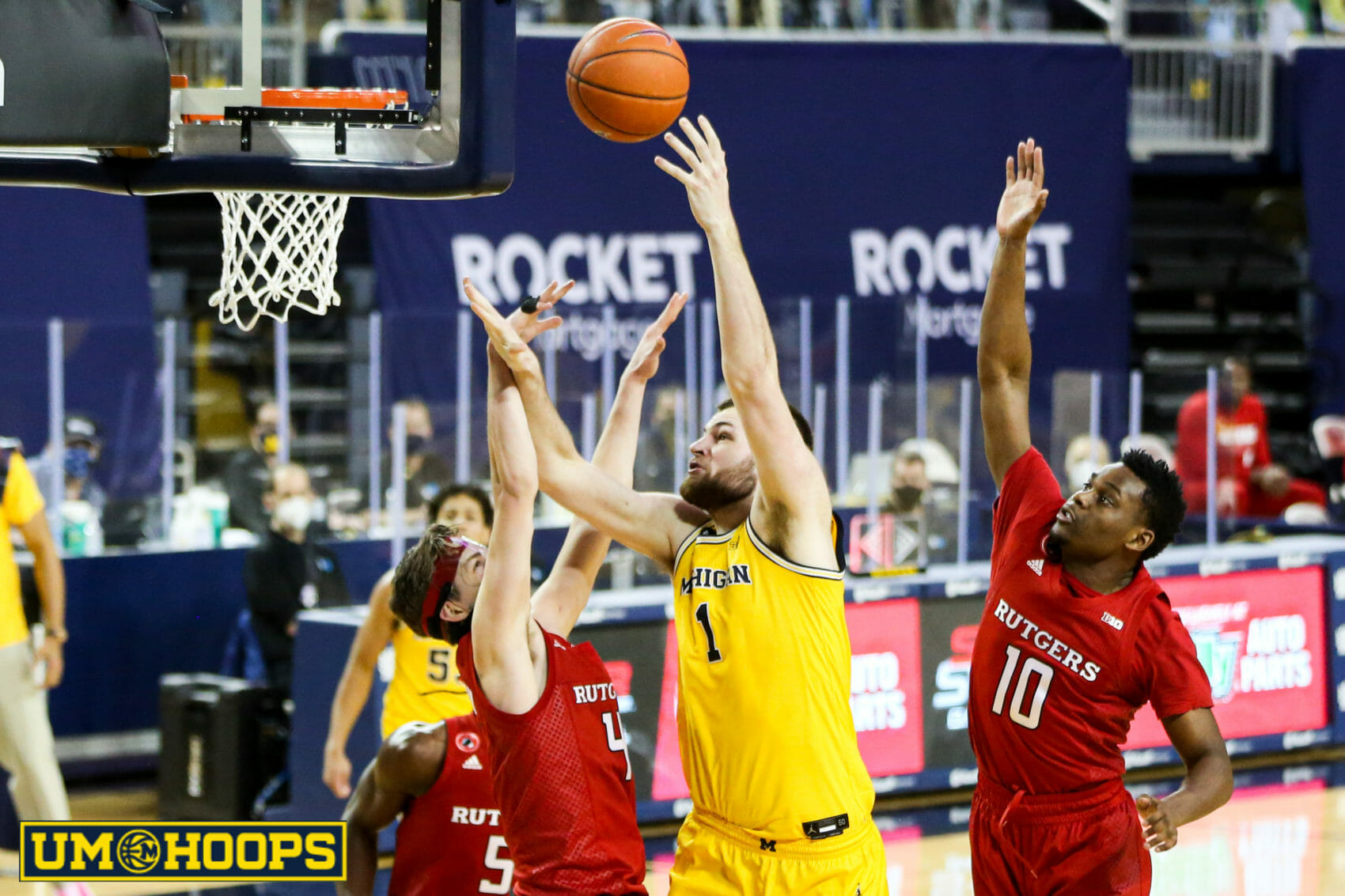 Welcome to our annual offseason Year in Review series. Over the coming weeks, we will recap the 2020-21 season on an individual level for each player on the roster. That includes looking back at what they did well last season, where they struggled,...

The right vs left post-up graphic is really incredible. Dylan, just wondering if there are any comparables for other bigs who had a similar right/left disparity in their fresh or soph season to see how they evolved over their careers? Not sure if you available that sort of data but it would be interesting to see

I started to poke around a bit but didn’t come up with any great examples because it is such a small sample pool of volume guys who are that one-handed.

I do think that Hunter is a pretty big outlier – not just this year – which gives me a bit of pause as far as the “he’ll just figure it out” thing. Big summer for Hunter and Juwan.

I have no idea what I’m talking about when it comes to post moves, but I think about Austin Davis a bit in the context for how Hunter can grow. Davis shot nearly 70% and most of it was off of pure post ups. In his case, he isn’t as tall/long as Hunter and everything he made was literally right at the rim.

With Hunter, it feels like with his left hand, he has moves out to several feet with flip shots, baby hooks, up-and-unders, Maybe with his right he only needs some of those Davis skills where he has to be right near the rim and get his defender moving more. I think it will be as much with his footwork as it will be with his hands. He doesn’t need to be “good” with his off-hand, he just needs to not be “invisible”.

Dylan - I had another question about his game. You don’t mention ball handling at all. While I don’t expect Hunter to ever really facilitate offense or lead a break…there are some bigs who are able to get the ball near the elbow or perimeter and then work their way into a post-up on their own. TJD even does this for Indiana sometimes. I think Williams at Purdue also. Is that something you ever see Hunter developing?

I have no idea what I’m talking about when it comes to post moves, but I think about Austin Davis a bit in the context for how Hunter can grow. Davis shot nearly 70% and most of it was off of pure post ups. In his case, he isn’t as tall/long as Hunter and everything he made was literally right at the rim.

IMO, the huge difference here is how much of a focus stopping Dickinson was for opposing defenses compared to stopping Davis.

Dickinson and Davis also scored a similar percentage of their points out of post ups (versus cuts, putbacks, etc.)

I’m guessing sample size would make it very difficult, but I wonder how AD would look on those charts.

Yeah, Davis is definitely not as one-hand dominant as Dickinson. Wasn’t trying to say that. Just pointing out that Dickinson is basically as efficient, with one hand, and on significantly higher volume as a post-up scorer.

Also the idea of going to his other hand and developing a counter move is definitely as much about footwork as anything else. Most of post-up scoring is about foot work.

FWIW… Davis actually turns his right shoulder more than Hunter (61% of the time) but also goes to his left shoulder more often (18%) which is a product of basically never facing up. That kind of illustrates what I’m saying that despite being one-hand dominant, Hunter’s post-up game is actually a bit more diverse when you include passing, face-up, etc.

To be fair, he doesn’t have to improve that much for it to make a difference. I don’t think most college bigs have the discipline to sit there and play the probabilities even if Hunter makes one or two with his right hand. Obviously the bigger the game and the more elite the competition, the more important it becomes.

Spring Term for UM started on May 4th. Do we know who from the basketball team is enrolled for a full spring-summer of Camp Sanderson?

Not sure on that, and honestly with the way the season went I feel like most guys probably need/deserve a break beyond the extra spring term. Not that they won’t be working on their games, but I feel like there’s probably a need to get off campus and live some of the rest of your life.

I was thinking that it would be very important for guys who need to take a step forward. Zeb, Terrence, Jace, possibly Brandon Johns. I think competition for playing time is going to be intense and some might want that extra advantage. It was big for Nick and Caris, back in 2013.

With Hunter and Juwan, it’s gonna be interesting to see how they do without a lethal 40%+ from 3 stretch 4. Isaiah just opened up everything for everyone and unless Brandon/Moussa can shoot it or Houstan plays a lot of 4, the court’s going to look a lot different.

I think the key is going to be making adjustments as teams start to get the scout. The high/low offense looked pretty good after Livers got hurt for a while, but in the end it does constrict the paint more. Diabate might bring other things with his elite athleticism too. Or we might find out that neither Johns or Diabate are deserving of 20-25mpg every game, which opens things up for Houstan to play more 4 so that another guard or Barnes gets into the mix. Or maybe Williams finds his 3pt shot and changes the equation.

Yep - next year’s team will have so many different versatile looks. High-low with Dickinson and Diabate could be killer, Diabate lurking baseline is such a threat and HD’s passing promise is so high that I love that combo on paper.

But if that’s not the right combo at any point, you can easily go PG, Brooks, Bufkin, Houstan, Dickinson for stretches and there’s more than enough shooting to get by.

And I love that Diabate is set to be our backup big. That could be such an exciting look. If there is a better front court in ours in CBB than I’d like to see it.

I’ll be honest…I’m still trying to figure out where to set my “excitement expectations” for Diabate. Last year Dickinson broke all of my calibration when he showed up as a marginally athletic, back-to-the basket, old-school, freshman big and blew the doors off even optimistic expectations. So now what do we do with Diabate?

On the one hand, he’s ranked extremely high and in rarified 1-and-done air that we haven’t seen in decades. He’s also an elite athlete with growing skills that won’t be asked to dominate on his own, but dominate as a complimentary piece. He doesn’t need the ball in his hand to be awesome.

On the other hand, he’ll be a little under sized for a true center in the B10, playing two bigs isn’t always easy, he doesn’t have that one skill to fall back on, and there have been many an athletic 5-star big at the blue bloods who has a rocky first year.

He could be amazing and prove your comment perfectly accurate…or he could be an 18mpg change of pace off the bench that loses times to Johns, Houstan, and others while he figures out how to harness his unlimited potential.

he doesn’t have that one skill to fall back on,

He does, it’s defense. So if he fulfills his role as being dude that catches lobs and finishes on cuts, that’s all he needs on offense. And he potentially could be much more than that, I like his potential attacking from the elbows for example.

I tend to agree with this.

I think it is going to be an interesting stat to follow. We assume the 10 minutes at center that Hunter isn’t playing are going to Diabate. We also assume that Johns, even in a best case situation, is probably topping out around 25mpg and more realistically is probably closer to 20mpg with a deep roster. So I think the total minutes are going to be pretty close.

The thing that usually gives a veteran the edge over a freshman is their consistency and reliability. That’s never been the adjectives you use for Johns. I think you’ll see a lot more variability with both of their minutes all year as Howard plays the hot hand.