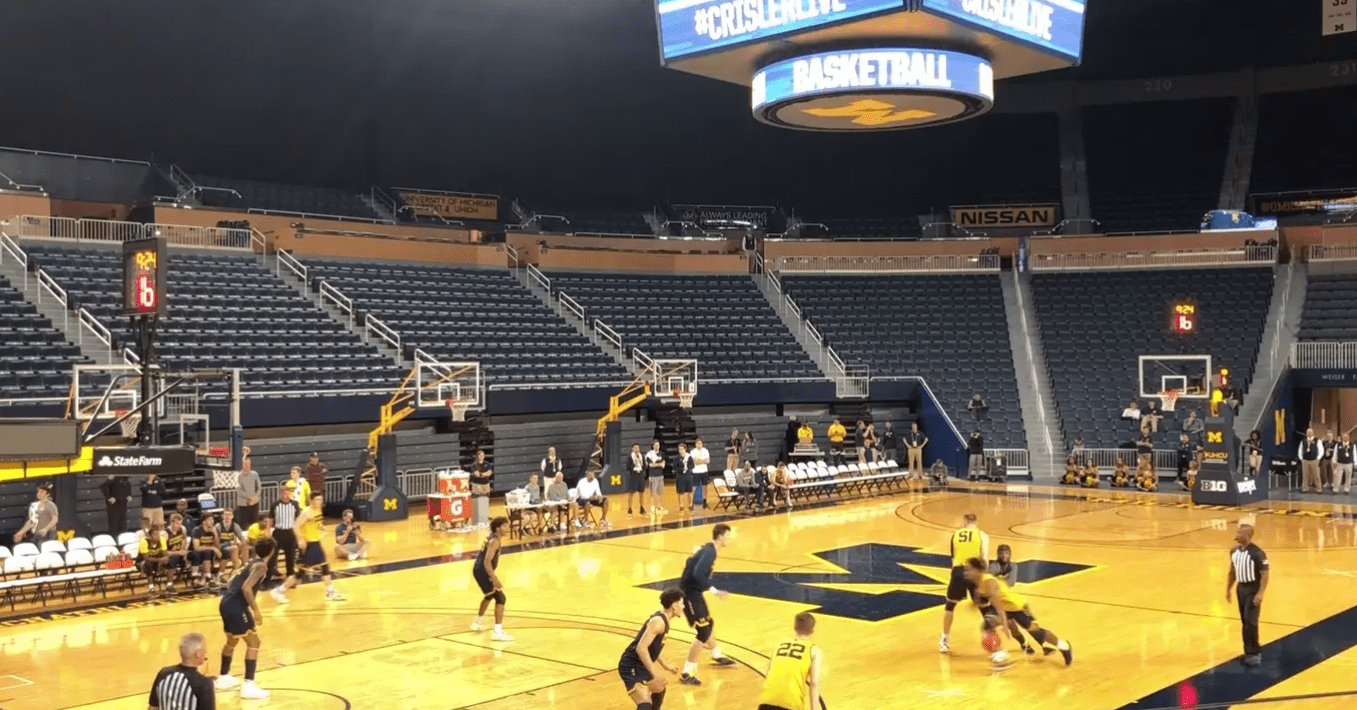 Michigan opened up the Crisler Center on Monday night to give fans their first look at the 2019-20 Wolverines under Juwan Howard. Here’s a full video Michigan’s five-on-five action from the open practice session. https://vimeo.com/369462036

Thanks for posting the vid! Looking forward to the podcast where they discuss this practice.

Davis got a lot of offensive boards, but damn like none of them were actually converted into points!

Added the third and final session of video (with mixed teams) to the post. Sorry about the delay.

I was at the open practice last night. Please understand I love Michigan Basketball, our players and our coaches, and I tend to see the glass as half full. Knowing that, here’s what I thought.

First, while I missed Coach B Mic’d up and actively coaching his players while giving a running narrative, I liked this format. As a coach I appreciated everything Coach B did, the X’s and O’s and stopping the scrimmage to coach up an individual player, but as a fan I loved being able to watch three full periods of the players PLAYING basketball. This was more like an inter squad game than scrimmage, and I enjoyed that. Up and down action, pretty much nonstop.

The players. Of course this is X’s team and he will be X, an older, wiser, just as feisty X., and he will be just as good as we’ve seen him be. He is the second best PG in the B1G only slightly behind All-American and National POY candidate, Cassius Winston. He didn’t dominate last night. No problem, he will when the time comes. Check.

JT, the best five man in the conference. He wasn’t dominant last night, either, but he will be, at times, when he needs to be. He is too big, too talented, and too experienced not to be. And besides that, X. X isn’t going to let anyone be any less than their best when things start for real. Check.

Isaiah, an excellent “Three and D” player whose confidence is oozing right now. He may not create for himself and others as well as many would like him to, but he is so versatile and so talented, and I think he will surprise some of those folks. I’ve always loved Isaiah and I’m excited to see what lies ahead for him and for his role on this team. He seems very comfortable as a true leader. He will play the three, and he will slide to the four seamlessly. Oh, and I loved his aggressiveness on the defensive end last night. Check.

OK, so how about the rest of the guys. How about Eli, and DDJ, Castleton and Johns. What can we expect from Bajema? Oh, how I wish we could have seen Franz, other than him just sitting on the bench with a cast on his wrist encouraging his teammates.

Eli is Eli. He is a VERY solid player. He doesn’t make mistakes. Well, he did throw one away along the baseline while running the Maize team in the third period. He hit a nice three. He took it to the basket a few times, and hit a couple of runners including an “and one” against Isaiah. He is just a smart, savvy basketball player who sees the floor well and makes those around him better. He’s a coach’s son and he knows where to be and what to do. But, Oh, I wish he were two inches taller!

Castleton. Wow! The kid is 6’11 and has gotten bigger and stronger. He has some athleticism and some very good skills. He will back up JT at the five and, here’s what so many seem to want to know, he can and will play the four. I thought he did a nice job last night and he, and Juwan, proved to me that he will get every opportunity to play the four. Boy, that was a nice three he hit, effortlessly, last night. I think he will be a very good player for us this year, and certainly beyond.

Brandon Johns. Of course he is an immensely talented young man. I think his confidence is growing. I really think Juwan will be great for Brandon’s development. He played the least of the potential starters last night, but since I didn’t know if he would even play (ankle), it was good to see him out there. I didn’t really notice a “limp” as has been mentioned. Yes, he did slip, but he stayed in the game, seemed to reach down to adjust his ankle brace and eventually came out and tightened it. The trainers sat with him, for a few moments, but there didn’t seem to be a problem, though I DO think the ankle injury has slowed him a bit this early season. He also hit a nice three.

Bajema. I thought he started slowly, but he got much more comfortable as the scrimmage progressed. He is certainly not “skinny” any more. I think he has filled out nicely and looks much stronger, physically, than he did in HS film. I just think the kid is going to be really good. He played both the two and the three last night, which I think is the plan for him. Right now he seems to be in a competition with Nunez for who can come in and spell Isaiah at the three, but I think Cole’s most natural position is the two.

Let me say this about Austin Davis. AD will simply not be out worked by anyone. He plays so hard. Yes, he needs to hit those bunnies around the basket, but no one will outwork him. Right now I think the coaching staff wants him to be able to spell JT a bit so they can more freely use Castleton at the four. With Franz’ injury it will be hard to slide Isaiah to four, so they plan to use Castleton there and AD will be needed to play some minutes at the five. Just my thoughts. No inside info.

OK, DDJ. Did I say Wow! for Castleton? Well, double wow for David. Based on what I saw and what I heard from the secret scrimmage, David Dejulius would be the starting PG on at least half, or more, of the DI teams in America. If he were not playing behind X he would most certainly be the starting PG on this team. The kid can shoot it. He can handle it. He plays aggressively both on offense and defense. He played with confidence. I was very impressed with DDJ.

So, team take aways. This team has a lot of versatility. In Castleton we have a player who can and will play the five and the four. Isaiah can play the three and the four, seamlessly. Especially when Franz comes back, Isaiah will be very versatile and his value to the team will increase as a result. Eli can play the one and the two, but I think he’ll play mostly at the two because DDJ can step in for X and really help this team. Can DDJ play off the ball. I think so, but we’ll see. It would be a great opportunity for him if he can. I just think it will be hard to keep him off the floor. I think Bajema will play both the two and the three, though Nunez is competing with him there. When Franz comes back it will be interesting to see if he can play some two or if he plays primarily at the three leading to that aforementioned versatility for Isaiah.

I think this team will mix some zone in with the man. Can you imagine a 2-3 zone with 7’2 JT, 6’11 CC, 6’7 Isaiah, 6’7 Cole Bajema (or 6’9 FW) along with feisty little PG X or Eli, or DDJ? Versatility and a team with experienced senior and junior (Isaiah) leadership that will continue to grow and develop as the year progresses. I’m excited to watch that process with this team.

This was very close to a full glass assessment.

Actually I’ve been very Blessed in my life, and I like to say “My cup runneth over!” Sadly, that often applies to my verbosity as well. Sorry to all for the length. I hope it wasn’t too much!

I was also at the scrimmage. My takes:

That’s it for my take.

Thanks for this, MrLG. Good stuff. No need to be sorry about point number four. I think Eli is a good backup PG, too, but someone is going to have to start at the two. I think it will initially be Eli and I hope he hits some of those threes. I believe he can, but, yes, he’s got to prove it.

Someone had implied, I think, that DDJ scored his points off of the best defensive PG in college basketball, or something to the effect, but he mostly scored off of others when X switched off of him. I DO think he shoots it well and, because of his shooting proficiency, and especially from three, he may emerge as the number one two guard. Watch out for Bajema as the season progresses, though.

As for number 6, I think Juwan is, perhaps desperately, searching for someone to play the three to give Livers the opportunity to slide to the four as a rotation between the three and the four, at least until Franz is ready to contribute. I think he’s looking at Nunez as a possibility, but I think Bajema may get opportunities to compete for both the two and the three, so there is some competition there. We can’t get Franz back soon enough, but in the meantime some others will get opportunities.

You may be right that AD is ahead of Castleton as the backup five, but I think the coaching staff is working really hard to give Castleton opportunities at the four, so that may be impacting his play at the five.

Again, good stuff! Thanks for your input!