Video Breakdown: The Development and Emergence of Jon Teske

Eric has been posting Michigan and other basketball-related videos on Twitter this season and will be providing new content to UM Hoops throughout the season. To find more of his video breakdowns and other basketball musings, be sure to follow him...

Between, Chares, X, and Teske it’s so hard to decide who is the best defender on the team or who is the most important. Teske’s rim protection and PNR defense are invaluable, X is the soul of the defense, and Charles is an elite and versatile wing defender.

Shooting wise, when Teske gets his feet set he’s a marksman. When he’s off balance he’s unreliable from two feet. I cringe when he’s shooting with any kind of sideways body lean.

Teske is improving every game, I do not cringe but feel confident anytime he has the ball. Teske is very smart with the ball and makes better decisions than most of his teammates. He seems to always play within himself and doesn’t do more than his talent allows him. Here is the biggest improvement on the team by far and that’s saying a lot with Poole as a teammate, Teske has turned into a 1st round NBA player just in my opinion.

Feel like “be a star in your role” is the most stereotypical coach speak ever, but it fits for Teske.

If this were 15 years ago, Teske would be sure lottery pick. Thankfully that means we get to keep him for 4 years now.

I’ve heard other people say that, what’s the thought process?

The areas he excels (roll to the rim, defend ball screens, bit of pop action) don’t seem to fit the old NBA as much as the new NBA?

Fair point since you’re right he’s not a post up guy. I guess people are thinking more about body type. I think if Teske were playing 15 years ago he may be better at posting up than he is now.

My 2 cents worth:: so there is a lot of real estate to cover out on the arc, not so much real estate at the rim or in the paint…

so we guard the begeezus out of the arc with 4 players, our 5th guy Teske patrols the paint. I would compare it to a football defense doing bump and run single coverage on a wide receiver whilst having a safety ‘over the top’
so the guy doing the bump and run is Xavier, the safety over the top is Teske… absolutely brilliant, Beilein!
the combination coverage is stifling… Xavier strong out on the 3 pt line and Teske underneath… your defender morphs from a 6 foot jitterbug to a man 13 inches taller as you get closer to the goal line

The thing I have been noticing about Jon this year is his expression and demeanor on court, especially after big plays. He makes a dunk, block or hits three 3s in a row and the bench and starters are jumping around going crazy and Teske doesn’t even smile. Not sure what to make of this. He looks very serious and focused. It could be like, “What’s all the fuss? This is what I do.”

He is just a super quiet kid, hence the “Big Sleep”… They’ve been trying to coax more emotion out of him, both the coaching staff but also Zavier Simpson.

From watching so much film on him for this piece, I would say Teske is certainly an NBA-caliber defender, even now. He protects the rim and defends ball screens at a very high level.

However, I think he would struggle a pretty good amount on offense. He is not a leaper and I think would struggle to finish over length around the basket. He also isn’t very strong and would have problems with NBA level-physicality. His jumper could continue to improve, which would help his NBA chances, but he has a slow release and only shoots in completely stationary, catch-and-shoot situations at this point.

I’m not sure about his NBA potential though time will tell by how much he improves. Areas of improvement, size, quickness and confidence. 14 more games of improvement ahead…I think he gets even better!

He seemed so nervous when he was doing presser with X. Tongue tied. I was rooting for him to get his sentences out. He will relax with that stuff over time.
Very easy kid to root for

During his first few games at Michigan, I was really low on Teske. To be honest, I never imagined him being a reliable starter on a really good team. Figured he would be a bench player and maybe look to transfer for his last season (like a Jon Horford type).

I have to give the young man some well-deserved respect. He has made some great strides and his hard work is paying off. Hopefully he can continue to improve into his Senior season where he might be relied on even more (with early departure potential for Matthews, Iggy, Poole).

Saw an interview with X, in which he was asked something about Teske’s emergence and what it meant to the team…X said that when they were both Freshmen, Teske was so shy that he’d turn red and turn away any time anyone wanted to talk to him. I think he’s probably come a long way already. I agree that his decision-making is what makes him so good. He doesn’t force anything, he rarely fouls, and I can’t think of any obvious mistakes he’s prone to. And he’s out there 30 minutes+! I thought he’d be ok. He’s much better than that!

I like that Teske is getting mentions as a current Michigan player who might have NBA potential, along with Matthews, Iggy, and Poole. How long until Zavier gets some love? How about Livers? Will this team have as many future NBA players as the 2012-2013 team?

Teske’s number one thing to work on is not getting sped up on the offensive end, and he’s way better than he used to be. Imo. He’s all big ten next year.

Those clips of him finishing around the rim from last year are ugly. I think I was guilty of taking him for granted a bit this year. He has exceeded any reasonable expectations by a wide margin.

Side note: I was watching the end of the Duke-Syracuse game the other night, and it was incredibly frustrating to root for a non-Beilein team. Syracuse is completely undisciplined on offense, especially when they get an offense rebound. Teske the rest of the team are really smart about knowing when to kick the ball back out instead of forcing a put-back attempt that equates to a turnover.

Sorry if someone posted this in the past… 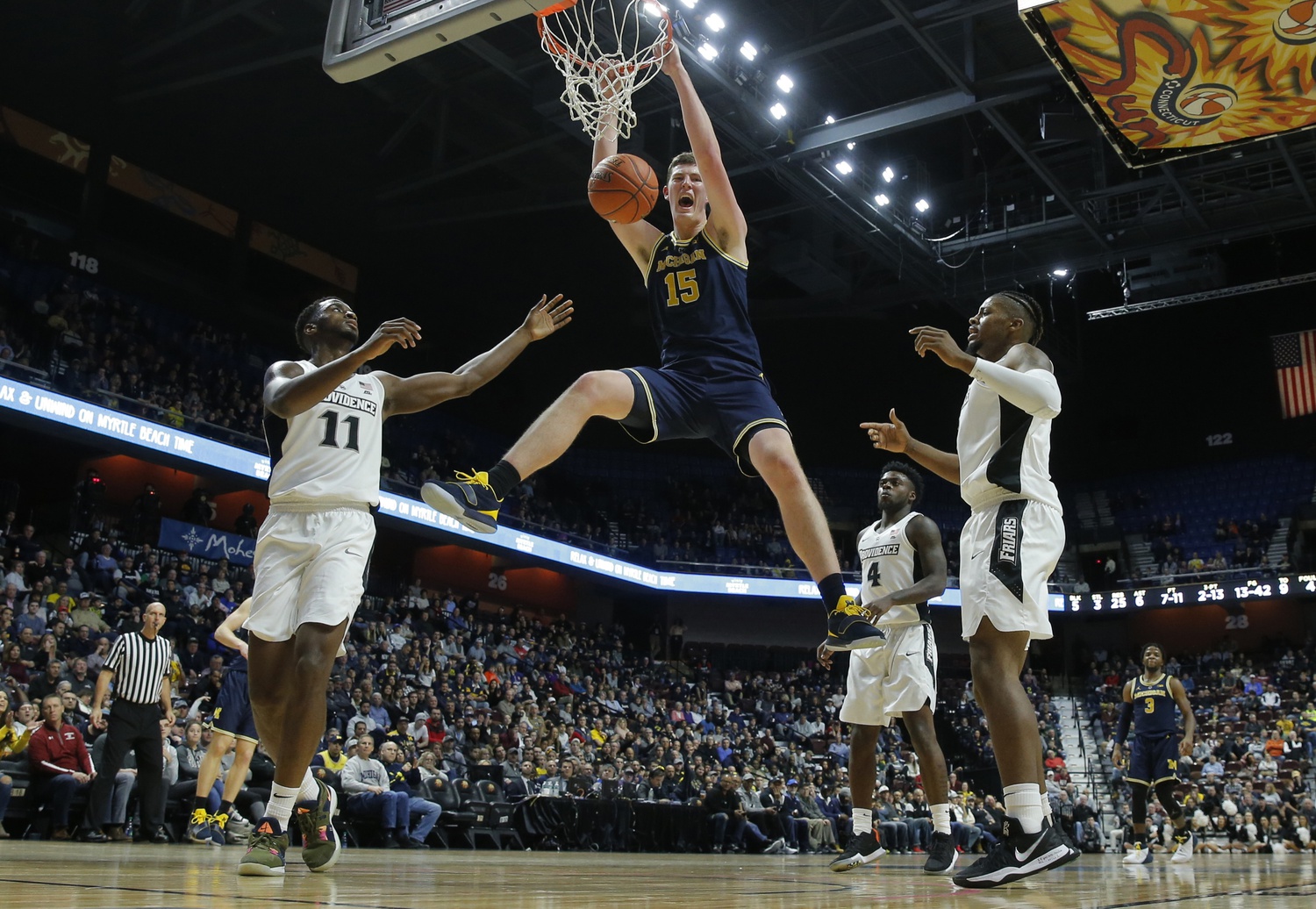 He resisted the urge to go home, and now he's reaping the rewards.