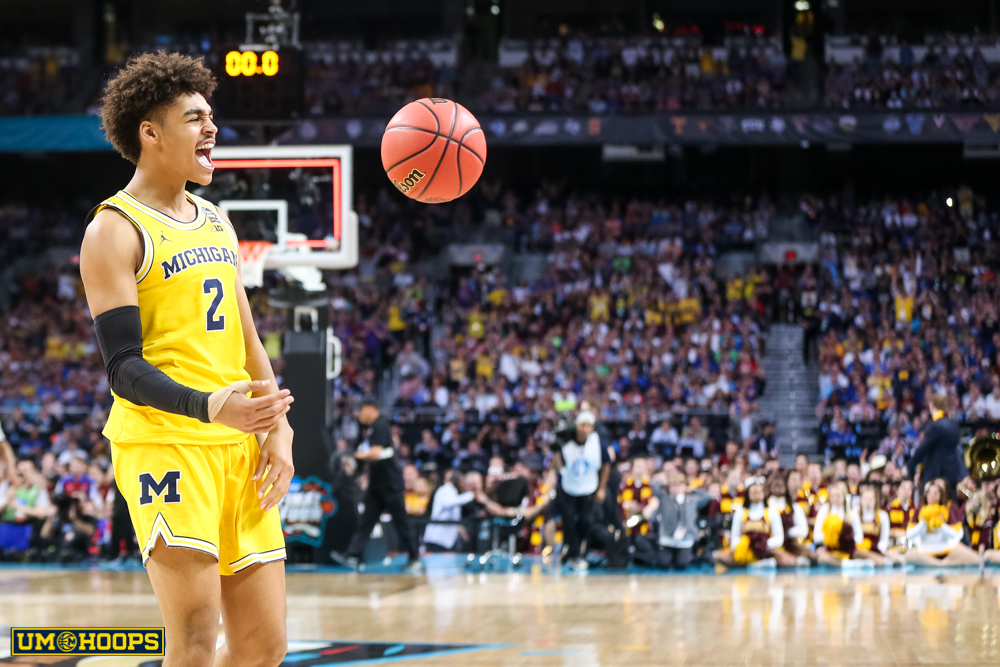 The Big Ten will be loaded with familiar faces like Ethan Happ, Carsen Edwards and Charles Matthews in 2018-19. Other programs will lean on key newcomers such as Indiana’s Romeo Langford to fill notable voids. Every year there is also a group of...

Wow, I totally forgot about Justin Smith. It’ll be really interesting to compare how he and Livers end up doing in their careers.

Someone on OSU probably deserves to be on this list as well, but I just wasn’t sure exactly who to pick. Also didn’t want to pick two players from any team, but Ryan Cline at Purdue could be a candidate as well.

The part where you say Poole is our top returning ball-screen threat and note he was only in the 69th percentile nationally…makes me nervous.

Poole may lead the league in scoring. He’s seems to be best shooter on team by far, can score from all three levels, good free throw shooter, will get plenty of opportunity, and is convinced he’s the best option on offense.
I can’t see him playing less than 30 minutes a game.

Poole may lead the league in scoring. He’s seems to be best shooter on team by far, can score from all three levels, good free throw shooter, will get plenty of opportunity, and is convinced he’s the best option on offense.
I can’t see him playing less than 30 minutes a game.

Lead the league or team in scoring?

In a normal year, I would echo @JJ3’s idea that Poole could lead the whole conference in scoring. However, Carsen Edwards averaged 18.5 PPG in 29 minutes per game last season and the 4 best offensive options next to him are all gone. I think he could have a crazy year close to 23 PPG if all goes right.

However, I do think Jordan Poole’s best case scenario is between 17-19 PPG, which many years would have him top 3 in the league.

Definitely not the norm in Beilein’s offense, especially when Charles Matthews will obviously use a lot of possessions.

I think he may lead the league; admittedly the odds are probably slim, however, It appears three guys are hunting shots for M. The rest are complimentary pieces. Poole and Brazdeikis are two guys who aren’t going to pass up scoring opportunities. Poole likes to score. Really likes to score. Probably never been a day Coach Beilein has had to implore Poole to shoot the ball

The Burke and Stauskas teams had a lot of mouths to feed offensively. Put either on this year’s team and I think they would each score closer to 20+.

JB said more about Poole at Media Day than I expected him to. "He’s got to shoot the ball a lot now. And I’ll stop practice to tell him, like I told Duncan Robinson many times, shoot that ball or you’re coming out. We need him to shoot the ball. We need him to hunt. If he can pass and see the floor well, because we’ll play through him quite a bit.”

I’m a Poole optimist but if JB has to tell Poole to shoot the ball more…i’m thinking he’ll have ample opportunity to have a Stauskas-like season numbers wise, even if he’s more inefficient.

Poole’s points per minute were higher than Nik’s or Trey’s in their freshman years and the same as Manny’s in his. Teams, situations, and roles are different, of course, but Poole showed the ability to put up a fair amount of points in the minutes he did get.

As for PnR, I’m not worried about giving MAAR’s PnRs to Poole. As far as I understand, too, those percentile numbers don’t account for situations when MAAR pulled the ball and the possession ended in some other fashion.

I think expecting 35 minutes is the ultimate extreme best-case, but it’s not entirely out of the question.

A more reasonable comparison for the jump I anticipate from Poole is Peter Jok. He went from 4.4 PPG and 0.7 APG as a freshman to 16.1 PPG, 1.4 APG in 28 minutes per game in his first bigger role as a junior.

Poole’s points per minute were higher than Nik’s or Trey’s in their freshman years and the same as Manny’s in his. Teams, situations, and roles are different, of course, but Poole showed the ability to put up a fair amount of points in the minutes he did get.

Nik and Trey played 30+ mpg as freshmen though.

Similar point as above, it is very hard to triple your minutes and maintain the same per minute rates of scoring and efficiency.

I’m not saying Poole won’t average somewhere in the teens in scoring, but he’s probably going to be option 1B not 1A and it is hard to put up something 18 PPG without being 1A.

I assume you have Matthews as 1A?

Personally I am a little worried if Matthews is our 1A. I feel like he struggles shooting too much and his handles are still too loose. He had those issues last year and a lot of times he wasn’t the first option. Even more volume and touches means he could very possibly shoot a worse percentage and turn the ball over just as much. I also assume we will play through Matthews the most of anybody, but Poole seems like he has more natural ability to be a 1A option to me just from what my eyes see. Not accounting for statistics.

I agree that Poole feels like a more natural playmaker, but Matthews used 25% of possessions last year and it is hard to imagine that number going down.

Poole used 23% while he was on the floor, for comparison.

Actually, I wouldn’t be surprised if Matthews usage went down to 24% – which is what Nik’s was in '14 and Walton’s was in '17, for reference. One reason Matthews’s usage was so high is TOs, and it’d be nice (and plausible) to see those go down significantly.

Even if Matthews is 1A Poole and others will benefit from it as I suspect teams will force Mich to prove that they have consistent 3pt shooting by doubling Matthews when he gets in the lane. Poole, Livers and others need to be locked and loaded.

The usual avenue to those huge scoring numbers is by using 27, 28, 29% of possessions like Trey Burke’s sophomore season (29% usage) or Carsen Edwards last year (28.7% usage).

Stauskas is obviously an exception, but he was ridiculously efficient as a sophomore.

I could be wrong, but I thought I recalled Matthews’ usage declining as the season wore on and that trend coinciding with the team finding more success. If Matthews is option 1A all season, I think this team is in trouble unless he seriously improved his game in a number of ways.