Bart Torvik is playing around with per game projections on his site for every team. This is all generated data, but found it interesting. What do you guys think of Michigan’s numbers? 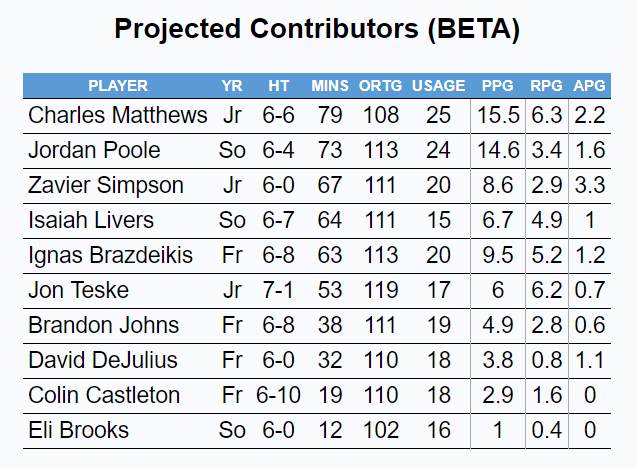 If Bart is somewhat right, then Eli is an afterthought this upcoming season. We’ll see.

If Bart is somewhat right, then Eli is an afterthought this upcoming season. We’ll see.

Seems like the way to look at it is that you can project ~40% of minutes for DeJulius or Brooks. I think Simpson will be closer to 75-80% of minutes though which would bump that down.

Yeah seems very close with my early guesses. I would have a few minor switches (most notably, more minutes for X like Dylan mentioned) but this is good.

I think the minutes projection is pretty spot on for what I’d like to see rotation-wise. I’ll be shocked if the team only has two players score in double figures, but I think that speaks to some of my concerns on the offensive end for next year.

I’ll be surprised if Poole only averages 1 assist with a usage rate that high. I also think Iggy will have a higher usage rate than Simpson, especially if he’s in the “gunner off the bench” role

I think those are prettty good projections, except that Iggy will have way higher than 20% usage. Although it’s tough for BT to account for the fact that Iggy is a bit of a chucker, lol.

I’d hope for slightly higher points OR rebounds from Teske (not necessarily both), but there’s likely some reason to withhold expectations as he steps into a (likely) starting role. Also see they project his usage as low which I hope is not truly the case.

This does bring up one of the Over Unders I was toying about for the season. O/U 1.5 Freshman making the top 8 of the rotation for this season. This projection seems to indicate Over with Johns OR DeJulius filling that slot, and no backup “traditional big” in the top 8 (assuming small-ball lineup). I still think there’s some discussion to be had about if Austin Davis gets any run this year and Colin takes a redshirt.

Overall, interesting projection, and certainly a good starting point for some discussion.

Surprised that people seem down on Teske avg’ing 6&6 in 53% of minutes. I can’t see him playing much beyond that in terms of low 20s per game and those averages don’t seem that bad to me.

How can you average more than 40 min/game? Please explain that one.

How can you average more than 40 min/game? Please explain that one.

The projections are minutes percentages. https://kenpom.com/blog/individual-stats-primer/

I did the math already haha it breaks down like this:

I guess for me I’m trying to temper expectations for him transitioning into a new role, but it still takes me a bit aback seeing a number like 6 for both of those stat-lines. I guess seeing 21 minutes total time for him would account for it, but I was thinking that number might be closer to 23-24 rather than 21.

I predict Poole will have over 3 assists per game, not 1.6 apg.

His overall assist numbers are way too low. He has Michigan scoring slightly more than last season on about 25% fewer assists.

I did the math already haha it breaks down like this:

Thanks @buckets12. The 29 minutes for Poole seems ridiculous. Sure, he might hit that number (or higher), but he’s still a rather unknown quantity. The minutes for CM and Z seem too low. And what happened to Austin Davis??

If Poole and Brazdeikis can be that efficient with such usage I’d be surprised. They’re both so young. At first glance this looks overly optimistic in general based on what my eyes saw offensively last year. But granted, I never took a close look at our end of year data.