Questions for the Pin Down

Post em here! Anything basketball theory/philosophy would be welcome. Will probably get to a bunch this week.

We heard from Dylan that OSU started switching screens for the first time this season. Not a surprise that we struggled to react on a short turnaround with tired legs.

But what SHOULD be our way to exploit that? Every defense makes a tradeoff. Good teams should be able to adjust to different defenses and attack their weakness. I presume Michigan can do the same. Unless this defense is a perfect solution to our roster.

Further than that, looking at the rest of the schedule what should we expect or look for defensively from our opponents and how well suited are we to do so?

Bumping this from last time:

How do you evaluate Hunter’s defense both on the college and NBA level? How has it changed this year?

We are on year 2 of flattering on/off numbers with him at the 5, the block rate is decent, and Michigan just won a game because he swallowed Sessoms alive for an entire half. On the other hand there are some really ugly moments in help and getting killed by Seton Hall on the glass. Where does he fall on the spectrum of Garza (will never play at all) to Kanter (played off the court in the playoffs but had a decent career) on the NBA level to your eye?

Would love you hear your perspective!

Is Davonte Jones being unfairly targeted by the refs or is he doing things that every ref would call on a consistent basis?

I would actually add the other half of this question to be about why Jones seems to not get any calls when attacking the hoop.

I think Juwan was perhaps a little generous with his frustration on the fouls against OSU, but he’s not wrong that we had significantly more attempts near the rim (compared to OSU’s mid-range) and yet they got a lot more FT attempts. Hunter, Jones, and sometimes Diabate are the only guys who are converting near the rim. I suspect there’s a way with advanced stats to measure something like “rate of attempts at the rim vs. foul rate” and see that Jones and Hunter aren’t getting the same calls that other PG/C combinations around the league get. Curious if it is something with their technique, random statistical oddity, erratic ref performances (as discussed on the pod), or something else.

Is it to early to talk life after Hunter?

How would you evaluate Houstan’s performance as a player this year with what he’s been asking to do, how well he’s doing it, what trajectory he’s on, and what he might project to if he stays another year? I got in a debate about him with a friend who’s fed up with him and I pointed out some of his B10-only stats being more reasonable to expectations. The friend pointed out his TO rate and lack of other traits beyond stand-still jumper. I made this table to compare him to other wings at Michigan in their first and second years (before the OSU game). Houstan has some warts but is also on a team that asks more of him than most. Just curious to see where you think he is, where do you think he’s headed, and how we can get the maximum out of him down the stretch. 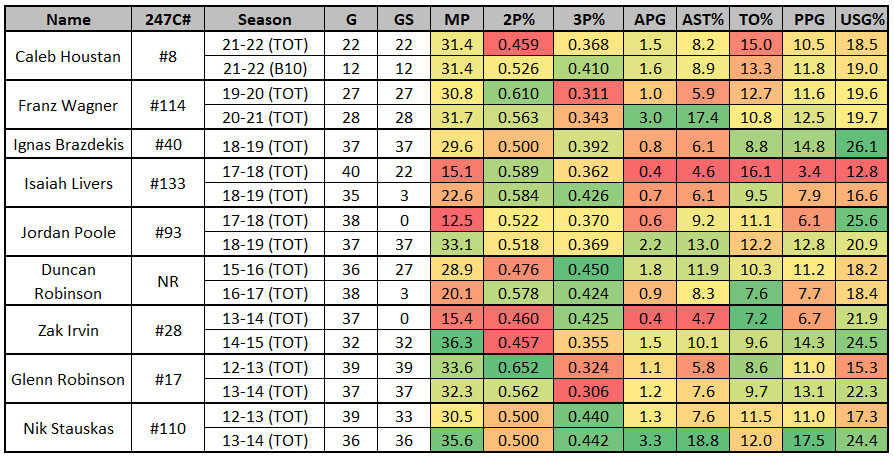