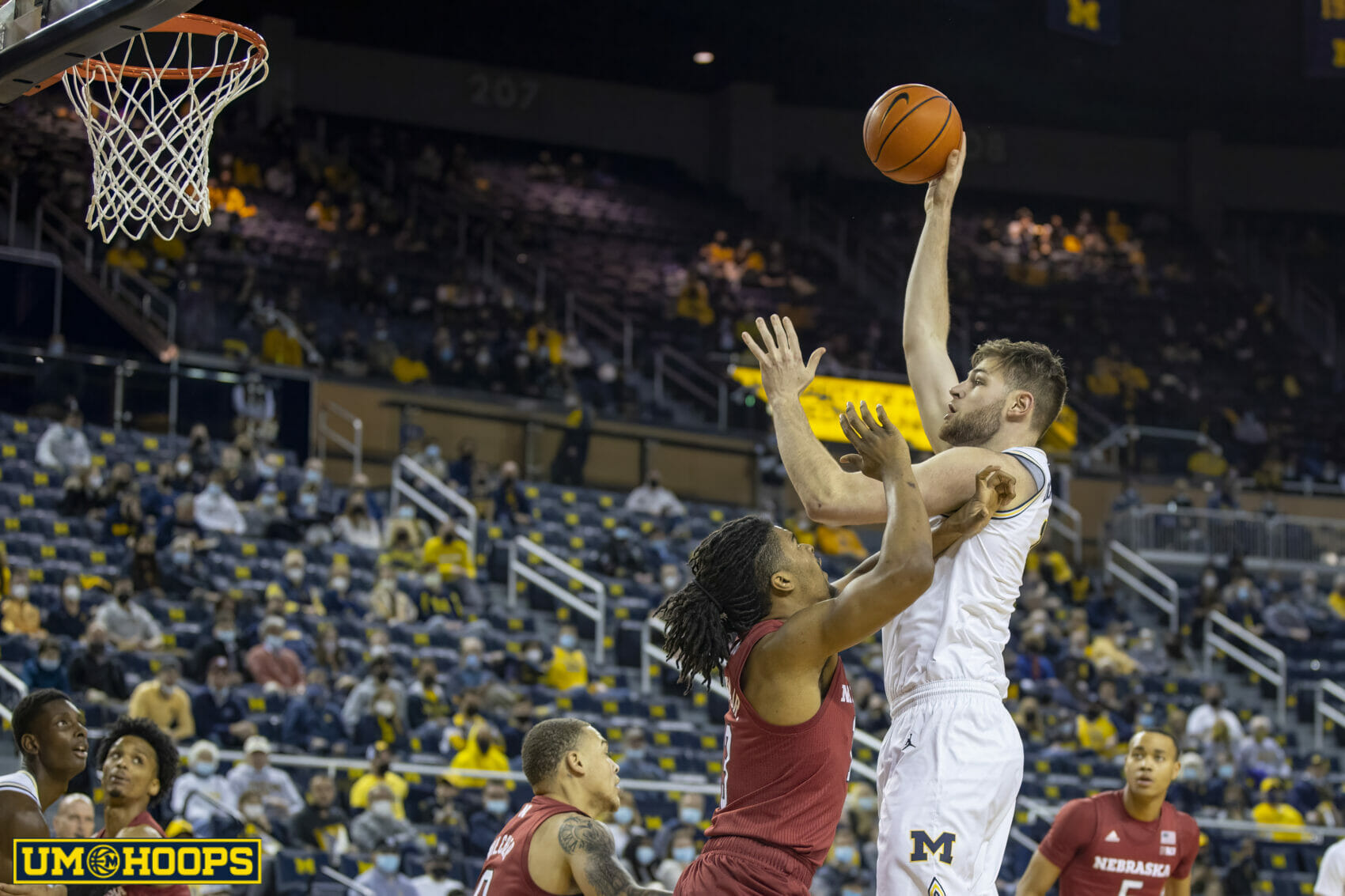 Dylan and Eric break down Michigan’s win over Nebraska and where the Wolverines stand entering the final few weeks of the season. Then they dive into a quick look ahead at Purdue. Listen to “Why coaches should rethink two-foul autobench, more...

This is the play I was referencing on the pod re: Houstan’s process

Terrible job boxing out by Nebraska there. Williams got right to the hoop to give Michigan a man advantage on that board.

Let me just say this, the title implies that coaches don’t really think about how fouls might play into their decisions to sit a player or allow a player to continue to play with fouls, two or three fouls for instance,
or what some would call, “foul trouble.” The term “autobench” itself, literally, suggests that there is no thought process by the coach during the course of the game, but rather that it is “automatic,” no thought just “automatic,” and predetermined. As one who sat on the bench (actually I was up and off the bench a LOT except during the "seatbelt"era), as one who has been there and made those decisions, that suggestion or implication bothers me more than just a little.

When I was coaching the decision, for me, to play or sit a player who was in some level of foul trouble, depended on many factors. How was the game being played? How was the game being officiated? Were these officials consistent in their calls? Was the game being officiated tightly or loosely? What was the maturity level and discipline of the player who had gotten into foul trouble? What was the momentum of the game and how would/could it be affected by my decision. And other factors, too, were all part of it. It wasn’t “automatic,” it was thoughtful and not haphazard.

I spent so much time OFF THE FLOOR, too, thinking about and planning about a lot, offenses, defenses, press break, so much, and I also thought about playing time for my players, and it was important. It was not taken lightly. It depended a lot on the circumstances of the game

Folks will respond, in all likelihood, to my comment here, with all kinds of statistics and analyses, and that’s great, and it can certainly be helpful, but there are human factors, too, and they must be considered in decision making. I know this is a different world than the one in which I coached, and that’s terrific. It’s GOOG stuff. I hope coaches utilize those statistics and analyses when making the decisions they make, but the human factors I mentioned must be considered in their decision making, too.

I think fans often don’t really stop to think about what really goes into the decisions coaches make. If they’ve never sat on the bench and had to make those decisions during the “heat of the battle” I suppose that’s understandable. It’s always easier to criticize or to simplify the process than it is put oneself in the arena, to enter the fray, to join the fight.

Coaches make decisions, and they’re held responsible for those decisions. And they should be. They live in a fishbowl where EVERYONE gets to watch and critique every decision they make. And people do. I suppose some decisions “may” be automatic, but usually there is more thought that goes into coaches’ decisions than people may realize. And they WILL be held responsible for the decisions they make. As I said, that is as it should be. There will be a result, and it WILL be up there on the scoreboard, and that is as it should be, too. But not everything is as people think it may be.

“Autobench” is a convenient term to use, it’s simple and it’s easy, except that it isn’t always automatic. There are reasons decisions are made, and they are oftentimes made thoughtfully, by very human people, human people who are very competitive and who want to win. I know this because I sat on that bench and I made those decisions, and my decisions were made with thought even in the “heat of the battle.” Juwan is SO much better than I ever was, and I can assure you he is a very thoughtful man and a coach who REALLY wants to win!

Again, sorry for the length of this, but the very use of the term “autobench” makes me bristle with consternation.

Did you listen to the discussion about it? Or just commenting on the headline?

Ugh, I had totally forgotten about that era. As an official, that was terrible. Not only was it one more bench rule that had to be enforced, but it also often made it difficult to have a productive conversation with a coach. I think it was a rule that was intended to make life easier for officials, but it actually made life worse.

Actually, I didn’t, and I should have, but, yes, I was mostly commenting on my lack of endearment toward the term “autobench.” It probably seems as though I was “aiming” my comments at you, but really I just have read the term “autobench” on the message board more than I can count and I’m pretty good at math

, so I was just venting a bit because those thoughts inside me were starting to build up. I just read the word “autobench” in the title, remembered the situation we had a few days ago vs Nebraska that guys didn’t seem to be too happy about, and I said to myself, “Ahhh, the dreaded autobench, OK…well, here we go,” and I started writing. Sorry, just venting.

Oftentimes I’ll write a piece and not hit “send” or in this case “reply” and I’ll just cancel or delete it. The feelings I expressed are real, but it would be a little disingenuous of me to write a piece seemingly about the title of a podcast to which I didn’t even listen. I’ll give it a listen tonight or tomorrow.

By the way, I DO think coaches ought to avail themselves of any statistical or data analyses they can in order to form the best possible decisions, and I’m guessing modern coaches do. I really DID coach during a different time!

And, yes, as ChattaM’s comment indicates the “seatbelt” rule was really a thing. It was called “bench decorum” and the coach had to remain seated throughout the game and could only stand up to “spontaneously applaud a good play.” Maybe it even said “a great play!” That was the era when I got my only technical! And, you guessed it, I didn’t even deserve that!

Yeah, I guess the term might be but it is also just a term that people understand at this point. We had a long and pretty nuanced discussion about it that included a lot of things that you mentioned.

And, yes, as ChattaM’s comment indicates the “seatbelt” rule was really a thing. It was called “bench decorum” and the coach had to remain seated throughout the game and could only stand up to “spontaneously applaud a good play.” Maybe it even said “a great play!” That was the era when I got my only technical! And, you guessed it, I didn’t even deserve that!

The rule is flooding back to me. You were also allowed to stand to instruct players and I believe to approach the scorer’s table to check a foul count. That was also the era during which certain rules seemed to change every season; things like what players were and weren’t allowed to do during a free throw, timeout decorum, and of course, what players were and weren’t allowed to wear (sweatbands, headbands, colour schemes, you name it). It was a dark time for hoops rules. There must have been some real control freaks in Indy in those days.

Wow…don’t remember the seatbelt rule. I do remember a couple years ago in youth club soccer they implemented a “silent Sunday” rule where games played in Sunday we’re not allowed to have any cheering or commenting from all fans. It was meant to promote sportsmanship but it was super creepy to watch a competitive high level game in total silence.

How do we get Coach to listen to this pod, Clockwork-Orange style? The nuanced analysis here is great and it’s surprising that Coach, who is generally brilliantly forward thinking when it comes to how he coaches and the stuff he runs, seems to always punt on 4th and 1 from the plus 47 when it comes to the two-foul question.

My thing is he literally just played Hunter with 2 fouls 10 days ago. And as I commented at the time, Hunter’s defense was a major liability (even playing zone) and Juwan knows it. It’s such a risk/reward decision, I’m glad I don’t have to make it and can just judge from my couch

I think a committee of umhoops members ought to approach the athletic department and request an “audience” with Juwan for the purpose of counseling him as to what he needs to do to better coach our team, especially as it relates to substitution patterns in general and specifically in how to deal with players who pick up two fouls or three fouls, etc.

Another great idea would be, in this era of incredible technology, one of our fans or several working collaboratively, could create an app that would enable Juwan, from the bench, in the heat of the battle, to “phone a friend” or, perhaps even better, to “survey the audience” which in this case would be the fans on umhoops. Ideally, he would be able to survey all of the umhoops fans on the game thread of the forum at that time. Wow, imagine all the great ideas, all the expert advice, he would get from that!

Yep, both of these ideas would be a terrific way to help Juwan improve how he deals with fouls and substitutions! In fact, they could even be done together. At the meeting with Juwan the guys could present him with the app, and “sell” him on the beauty and efficacy of it. Heck, they probably wouldn’t have to sell him at all. I’m sure he would immediately see the features, advantages and benefits of the app and, with his “growth mindset” and his stated desire to continually improve, he would eagerly put the app into practice.

So, good idea? Who wants to approach Juwan or the athletic department and set it up?

could create an app that would enable Juwan, from the bench, in the heat of the battle, to “phone a friend” or, perhaps even better, to “survey the audience”

Excellent idea. The only problem is that Quinn will rat him out for using his phone on the bench.

This was a very good podcast. Very interesting on Purdue matchups being more favorable than one might expect vs matchups against Illinois.