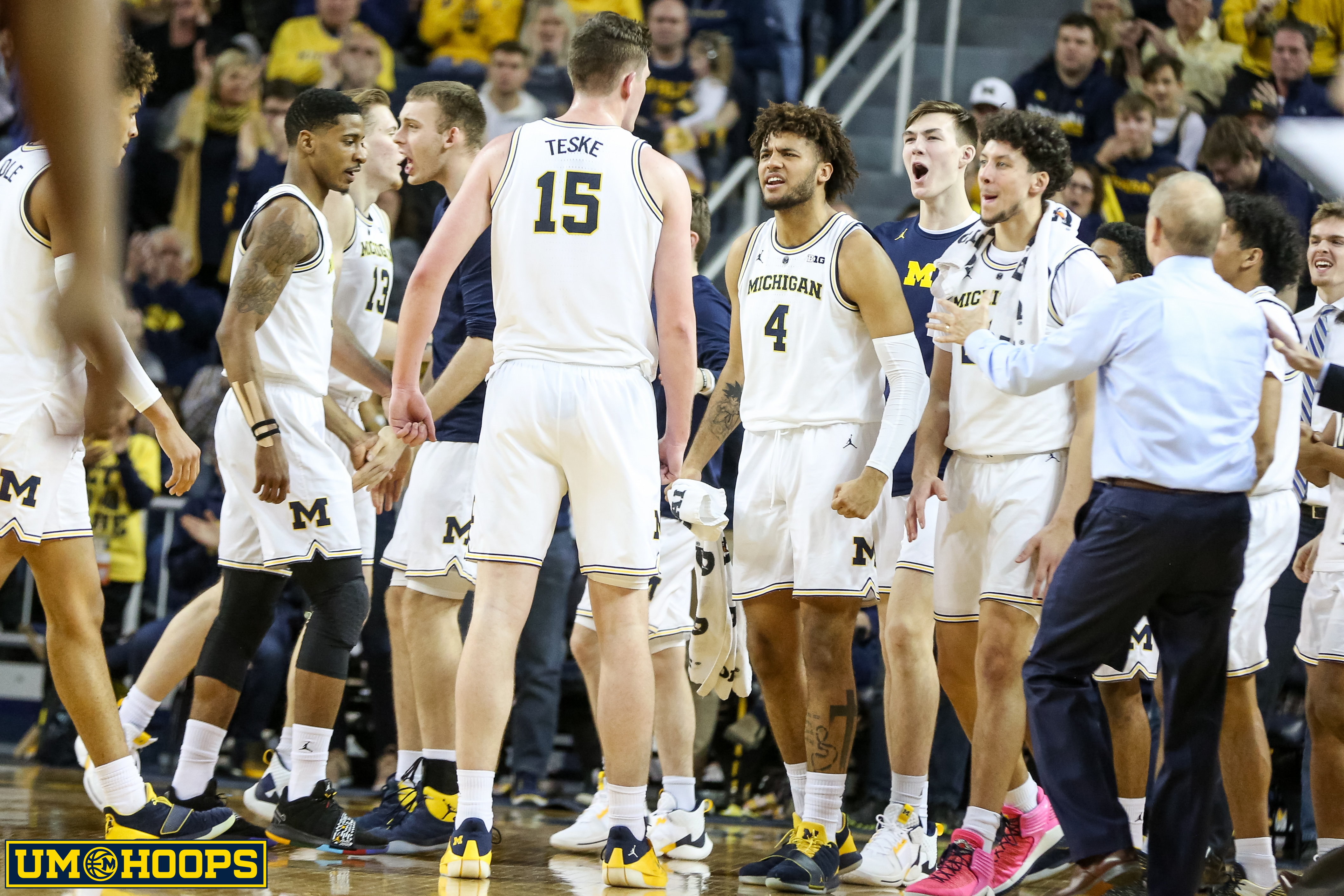 Michigan State had a great week but lost another starter to an injury. We make sense of what Nick Ward’s injury means for the Spartans over the next few weeks. Michigan bounced back from a bad loss at Penn State with a comfortable home win over...

On Nick Ward; not having him makes Teske’s life less strenuous on defense. Also prevents MSU from pounding it inside to get M in foul trouble. Ward was really MSU’s only low post threat. Tillman is a nice player but a low post threat he is not. As a great coach once said; “Where’s the threat”

Defending Cassius Winston; Make Winston a finisher in the lane. If Winston scores 30 and Goins, McQuaid, and Ahrens get minimal catch and shoot threes, is winning basketball. Winston is a fantastic shooter. Need to make him drive and finish when he has the ball. Better still if he doesn’t have the ball and someone else has to score or distribute.

Winston reminds me a little of Bobby Hurley in his Duke days. Hurley would kill M with dribble drives, draw two defenders, and distribute, or shooting top of the key 3’s. Hurley was not so great at the rim. I have similar thoughts on WInston.

On Pod you guys said M’s offense was a mess or something similar to that. I disagree. I think the offense is fine but shooting has been a mess. Uncommonly bad. Unsustainably bad. Beilein has said he has no answer other than taking open shots and making them. I agree. Have to ride this bad stretch out. Hope it ends at Minnesota. We’ve seen it before; Irvin’s senior year slump, Duncan Robinson last year, and there are others.

Nice work, these pods are good stuff. And can’t accuse Dylan of just saying what the fans want to hear.

On Pod you guys said M’s offense was a mess or something similar to that. I disagree. I think the offense is fine but shooting has been a mess. Uncommonly bad. Unsustainably bad.

This is pretty much how I see it, too. I think it’s Dylan who said there are still open looks being generated. Easy to forget that on the season the team is basically an average 3pt shooting team (34%), that Poole is shooting 38%. Sure, the shots might not fall (as they failed to in most of the NCAAs last year), but it’s still an excellent place to be with the floor the defense provides and the upside still there on offense.

I actually think they ran some of the best offense in a while against Maryland. Crisp, good ball movement, extra passes, etc. Especially early.

On Pod you guys said M’s offense was a mess or something similar to that. I disagree. I think the offense is fine but shooting has been a mess. Uncommonly bad. Unsustainably bad. Beilein has said he has no answer other than taking open shots and making them.

The offense can be running as efficiently as possible, but if you can’t make shots it is a mess. A mess probably isn’t the best word – did I say it on the pod or are you summarizing?

– but the offense is the weakness of this team. Specifically jump shooting and that’s becoming “messy” mentally IMO.

I agree that it is creating open shots, but all signs point toward Michigan not being very good at making open jump shots. Now obviously even bad shooting teams make shots sometimes, but the shooting has been pretty bad and we are a long way into the season.

It isn’t like John Beilein is going to forget how to coach offense. Obviously he can get Michigan open shots, but if they don’t fall then Michigan’s offense is going to be its Achilles’ heel.

It’s pretty much the same offense as last year. For comparison, each of our last 3 games AdjO would have been the second best performance of the NCAA tourney run last year.

Michigan’s offense was awful in the NCAA Tournament other than one game. It won in spite of its offense.

Look at how Michigan’s offense was playing in the final 9 Big Ten games (regular season/tournament).

Again when I say awful, I’m talking about the results … i.e. Michigan’s offense was woefully inefficient. If you took all of the NCAA tourney games that Beilein has coached, that run probably has 5 of the 6 or 7 worst offensive games. He’s coached a lot of tourney games.

I hear ya. I guess I’m just saying that, taking a step back, the offense is still ranked 33 on kenpom – that measures results, right? And the team is still shooting pretty much what it did last year from 3 (<1% worse, and I bet it ends up higher) on the year. You can pick out good and bad stretches from this year and last year.

It’s a pretty good place to be when we’re generating open shots for players who we have decent reason to believe could hit them, and still generating over a point per possession against good defenses even when they miss most of them.

I mean, Poole went 1-11 from three over the last two games. I don’t think that’s going to happen too often going forward. Duncan Robinson went 2-13 over a three game stretch last year, and 2-10 two other times. He shot 38% from 3 last year, as Poole is shooting this year. Doesn’t mean I’d call a possession that resulted in an open Duncan Robinson 3 a mess of a possession.

And this is coupled with the defense of course.

I don’t think I called anything a mess of a possession? Apparently I said on the pod that “Michigan’s offense is a mess” but was trying to clarify that I was referring to overall production not the flow or whatnot.

Those are the messy numbers. Not because the offense is necessarily running poorly, but because this team just isn’t a very good shooting team. We didn’t think it was before the year and the ceiling on the year probably comes down to jump shooting at some point.

Defense is top-3 in the country elite, but if you just can’t score then there’s not a ton of margin for error on any given night.

I don’t think the offense being ranked 33 on kenpom is a good indicator for your argument. At least with respect to our expectations/hopes for this team. 2014 Uconn with Shabazz Napier is the only team in the kenpom era that has won a championship with an offense or defense that’s outside of the top 20.

I would certainly consider our offense a mess, a problem, a weakness, etc. relative to the other title contenders. This team barely scrapes a point per possession in the majority of conference games.

With that said I do think there’s some hope. Poole has been massively slumping and there’s still hope he climbs out of it. I think we all know that he’s a better player than what has been on display the last 2 months. Hopefully he figures it out.

Poole shot 42% from 3 in conference last year and is shooting 35% in top 50 quality games this year, so I’m not that worried that he can’t shoot against higher-level competition. Of course it’s different being a marked man, but if the offense generates open looks for him, I think he’ll knock down a fair % of them.

I mean, do you think Poole is going to shoot 31% from 3 for the rest of the year? If Quinn wanted to double down on his night out bet and let you take the over/under on Poole’s 3pt shooting% at 31 for the next 5 games, which would you take?

Anyway, we shall see. I think we can all agree that shooting has been a weakness of this team, especially lately, and that it’s an area that is a likely culprit for losses.

For Poole to hit 27% from 3-point range over the last 13 games is at least a stat to take serious. Will he shoot 27% for the rest of the year? No, probably not. Will he shoot 50% like he was when Michigan’s offense was playing well in December? I don’t know.

(I’ve written a lot about the offense over the last few weeks on the site. Side note, it makes me sad that someone with the handle UMHoopsFan isn’t a subscriber

I’m not sure what to expect on any given night for this offense and it is uniquely scoutable in some different ways. I just am surprised that saying Michigan’s offense is struggling on the podcast was so controversial.

I remember when Xavier Thames made the jump at San Diego State from being a good player as a junior, to being MWC player of the year as a senior, he was asked the most important thing he improved to get so much better…

Doesn’t it seem like the main reason Jordan Poole’s percentage is down is his difficult shot selection? i.e. off-balance, hand-in-face, etc…

Which coach said JP was a difficult shot maker? That coach did JP no favors.

I think the solution is for JP to focus on taking only very easy shots.

And leave the difficult ones only for when a shot clock violation is going to occur, or at the end of a half or game.

My problem is that the word mess tends to suggest disorganization, and the team moves the ball pretty well. (In fact, I can think of almost no point this year when we’ve complained about the ball sticking routinely, as we have almost every year, good shooters or not.)

Not that we haven’t shot the ball poorly, but umhoops is right that if one or two guys perform to capability, we’re good; in fact, we saw that tonight against Minnesota, happily. 24-3 is pretty gaudy; we’ve played some good teams. Take down MSU on Sunday and get to 25. . . you have to call this one of Beilein’s best teams despite the shooting.

I think it’s accurate to say our transition offense has been a mess.

At times, I agree. Looked better last night, though.

On a happy note, our shooting has reverted. In the five games since we debated whether UM’s offense was a mess because they weren’t making jumpers, the team shot 39% from 3. Poole, a specific subject of inquiry, shot 38% from 3 (his average for the year).

Some reason to hope for good things in the postseason.