Quinn says Donlon isn’t talking to UNC-Wilmington (or anyone else) at the moment: 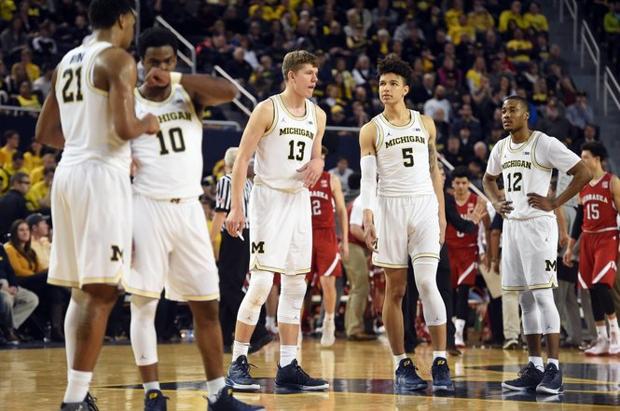 What's next for Michigan hoops? An offseason of questions

"A source informed me that Donlon has not formally interviewed for any head-coaching opening. Nor has he had contact with UNC-Wilmington, his alma mater, and a job many underlined for Donlon when former head coach Kevin Keatts left for N.C. State.

Per that source, Donlon is not in any current talks for any head-coaching positions."

I’d like to see donlon as beleins successor. Hope that’s the plan

He has the chance to look really good next year too. The defense is going to pretty darn good adding in X and CM. Add in the second year of familiarity and his stock can only go up as an assistant coach.

I think we can do better. And that’s not a knock on Donlon, as he was unjustly fired from Wright St IMO. Won 20+ games in three of his last four seasons and went 13-5 in the Horizon league his last year there. That’s not a great conference, but it is always solid as far as mid majors go, despite losing tons of good teams over the years.

Yeah, especially if Wilson and Wagner come back, the team could be pretty good, again generally. And with the defensive uptick the second half of the year, X and Matthews seeming to be good defenders, the second year in Donlon’s system, Wilson and Wagner likely to be better and more consistent, and the unlikelihood that we’ll be as unlucky with respect to opponents’ 3 pt % (we finished 309), the defense could look pretty good and much improved.

I don’t get why people are plugging Donlon as Beilein’s successor. Until Lavall Jordan left, they said he was lined up to succeed Beilein, and you probably could still make that case, depending on how things go for him in Milwaukee. What exactly has Donlon done to earn this expectation?

Maybe as a change of pace, but not as a major component of the defense. I think Donlon used it occasionally at Wright State but has always been primarily a man-to-man/pack-line/gap guy. Beilein has talked about how coaches kinda figured out the 1-3-1 (especially in the Big Ten as Carmody was running it for years too). Now more teams have more 3 pt shooters, which makes it harder too. But we’d certainly have the athleticism and length for it. If we can actually get the primary defense going well early, I could see the 1-3-1 and the 2-3 being used for spurts here and there or in possessions out of timeouts, that kind of thing.

agreed as a change of pace. I liked when coach B (with the team of Stu, Darius and Nowak) would go to the 1-3-1 after a made basket. it used to confusion teams a lot. I especially remember him doing it and it working when they upset Duke…

We definitely don’t need a coach in waiting or succession plan. Those rarely work out well as the timeframes often get messed up and the current coach decides he doesn’t want to retire or the successor gets tired of waiting. I expect Beilein will at least coach out his current contract which I believe runs for 4 more years. A lot can happen in 4 years so I wouldn’t tie myself to any coach be it Donlon or whoever.

That’s good if Donlon is back next year. If I was him, I wouldn’t be running to take a job at low major conference. Wait for the right opportunity. I think that’s what a guy like Dane Fife is doing which is smart.

I would like to see both Donlon and Lavall Jordan as legitimate options when that time comes.

I don’t like having a coach-in-waiting if he has no head coaching experience. In Donlon’s case I’d be OK with it.

Or Juwan Howard becomes the hot “can’t miss coaching prospect” or Dayton hires the next Archie Miller and he becomes the must-have coach or Patrick Beilein rises up the coaching ladder and becomes a must-have coach or Beilein leads the team to 5 straight Final4 appearances with a pair of National Championships and UM becomes a Top10 national job that can poach successful coaches from major jobs, or…

Point is, so much can change in 4 or 5 or 7 years. Beilein doesn’t appear to be going anywhere any time soon, so not much value in opining on something that will change annually until Beilein does end up retiring.

You are making a wild assumption tha t those who want Donlon to be the successor are the same who wanted Jordan.