Lessons and adjustments from Michigan's loss to Michigan State 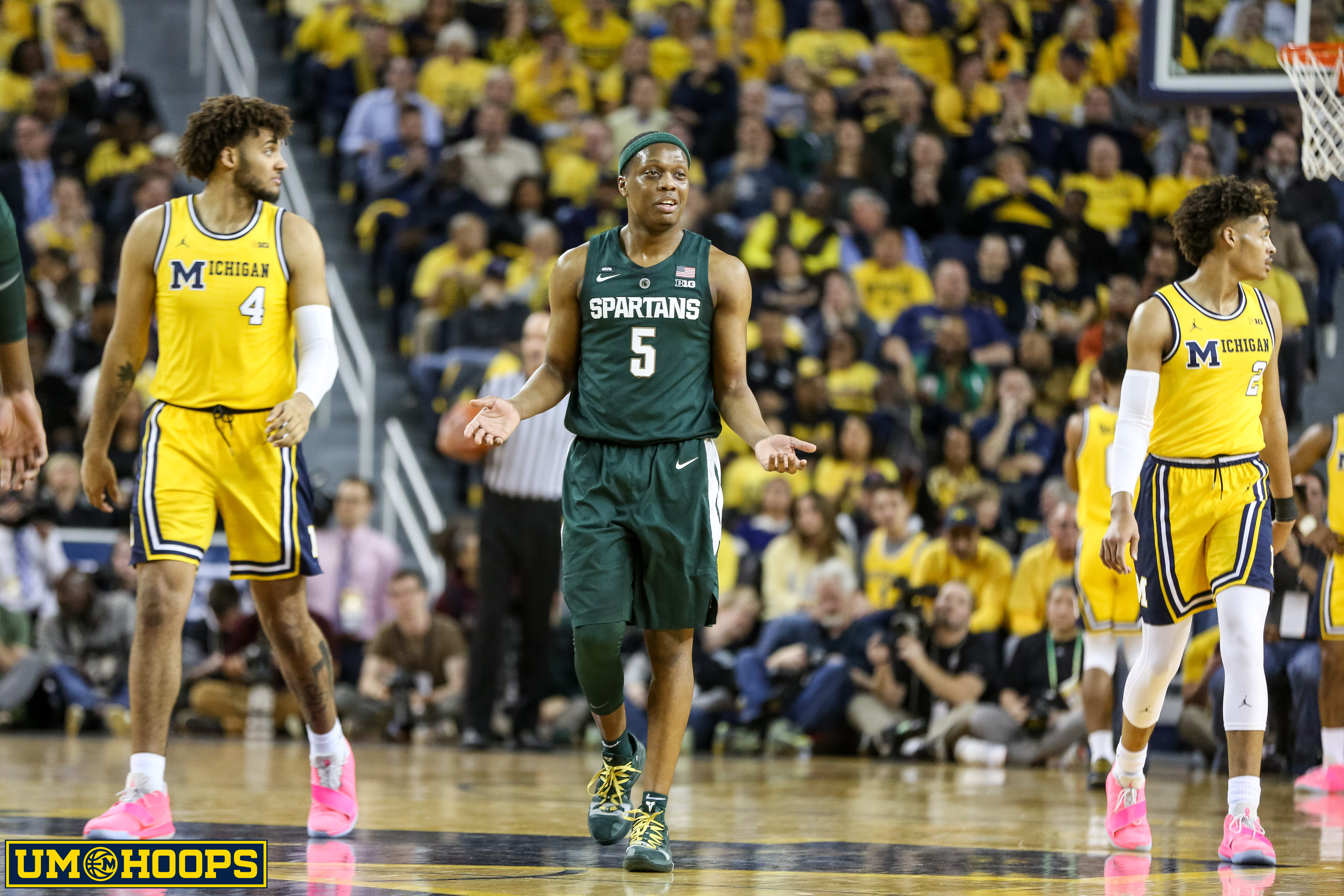 There was an element of shock when the final horn sounded and Michigan had dropped its first home game of the season to Michigan State. At one point, it felt like the Wolverines were ready to blow the roof off of the building and pull away with a...

“The story of Michigan State’s win was mistake-free execution and clutch shot making by Cassius Winston”.

I don’t know if this was discussed at any point before, but was Livers trying to nutmeg Goins on the second clip, or did it just look like that after McQuaid tipped it? I think I’m going with an attempted nutmeg.

Not trying to change the subject here, just noticed that for the first time when watching the first video.

In the last possession of the “wasted possessions” clip, Winston bunny hops his pivot foot, same as Poole did earlier in the game. I know this wasn’t the intent of this video but it still burns my ass knowing Poole got called for a walk and Winston got away with one. Could’ve (should’ve) been Michigan ball down six with just under four to go.

"As the dust settled and I watched the game on tape, I go back and forth as to whether that strategy won the game and whether the success is repeatable. Michigan had some awful possessions against switching defense, but the Wolverines still scored 1.12 points per possession for the game — the best that any team has performed against the Spartans this season.

The story of Michigan State’s win was mistake-free execution and clutch shot making by Cassius Winston."

^^^this. I couldnt believe how much of the last 2 weeks has been spent talking about Michigan getting out-schemed by MSU’s switching. Michigan would take 1.12ppp everyday; though the longgg cold streak in the second half did seem like especially damning timing. But the real story was MSU scoring 1.29 without even shooting the 3 well/getting in transition. Winston played out of his mind and Teske/Poole had off days (same with Matthews but who knows how much the ankle factored in). Gotta figure out how to defend the PNR better and also just execute better on D.

To be fair, by my count, Michigan only scored 18 points on the 27 possessions (0.67 PPP) Michigan State switched with their ‘5’ man. Thus, I would say that when employed, the strategy worked quite well in the first matchup.

Definitely a telling statistic, and a lower PPP than I would’ve expected. I mostly meant to say that the game was primarily lost on the defensive side of the floor (Winston going crazy, poor execution by Teske and Poole) and dumb turnovers/missed shots on offense. But your article about how to attack the switching definitely shows there’s hope on improving on the 1.12ppp beyond 3pt shooting luck and not letting Isaiah dribble on the break

No disagreements there (defense certainly needs to improve).

While I believe Z will be himself defensively if he isn’t and if Charles is 100% I’d love to see Charles on Winston and Z on Mcquaid as well.

Did anyone else notice that MSU ran a lot of screen, and then re-screen back the opposite way with Cassius? I noticed it during the game. They ran it a lot. And U of M did not handle it well. One of the big contributing factors in the loss in my opinion. I hope U of M handles this situation better this time around if MSU does that again.