How Jon Teske dominated the Battle 4 Atlantis with his defense 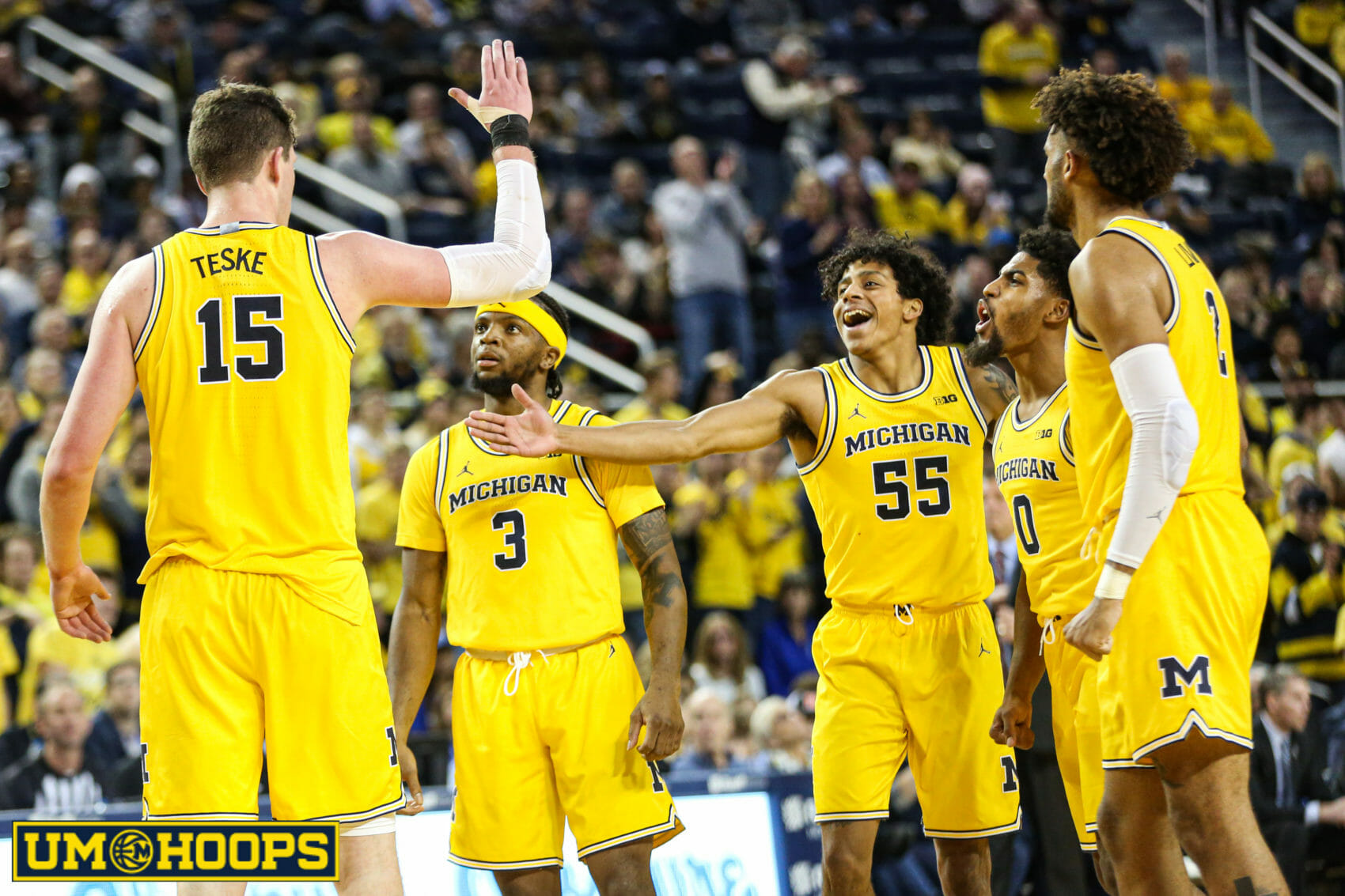 How Jon Teske's dominated the Battle 4 Atlantis with his defense | UM Hoops.com

Michigan headed to the Bahamas for the Battle 4 Atlantis with many around the country unsure of how good this Wolverine team really was. After three games in three days, Michigan solidified itself among the nation’s elite. In doing so, Jon Teske...

Excellent as usual. I’ve been thinking a fair amount about Michigan’s pending showdowns with MSU since about, oh, 2pm or so on Saturday. Other people on here know more about basketball than me, but it seems like the move to sagging off of ballscreens under Howard will do a better job of answering Cassius Winston’s screen game, particularly in limiting his ability to pass. I imagine that he’ll do quite well shooting from midrange, but that’s probably a cost that’s worth accepting.

Until MSU finds a viable pick-and-pop threat, I think their PNR game will be easier to defend.

JT is thick and so strong on his feet…the result of the SANDMAN!!

This is great analysis!

Eric, DB, are there any small ball lineups nationally that you think could neutralize Teske, whether in skill, athleticism, and/or scheme?

Interestingly enough, Teske has only one game with 4 fouls (Iowa State). 2 Fouls against UNC and 3 against Gonzaga. He had 0 against Elon in 29 minutes played. Definitely a credit to him for playing smart and under control.

I think that a great pick-and-pop guy is probably the weakness to this ball screen coverage. Michigan is basically surrendering a lot of pick and pop jumpers and that has worked out for now, but U-M might have to defend ball screens differently if a team had a legitimate good pop guy.

Who in the big ten fits that bill right now as someone to worry about?

Nate Reuvers and Jalen Smith are the first two opponents that would come to mind as good pop threats. Xavier Tillman has been picking and popping but not making.

Wesson and Reuvers can both knock down threes. I don’t think OSU has run the P&P much, because Wesson is so valuable down low.

Anyone have speculation on what Michigan’s first counter will be when they run into a genuine pick-and-pop threat?

Unless they run into a team like Kansas, I have a hard time thinking of a team that can counter this defense

I would let Reuvers and Jalen Smith shoot though, if they keep current form. Even if Michigan was theoretically playing against itself, I would let Teske shoot those pick & pop threes, too. All are shooting 31.8% or under, so the shot is valued at ~0.95 PPP at best (and worse in Jalen Smith’s case). Small sample, of course, but volume is pretty low for all three, which is generally a good indicator of shooting ability.

Not to mention that if a big is shooting a three, it is less likely the team secures an offensive rebound, which raises an offense’s potential PPP. I’d probably welcome those shots, to be honest.

To answer your question @stephenrjking, let’s say Michigan does face a hot-shooting Kaleb Wesson or other capable shooting stretch five, the primary counter would be to have the defender closest to the popping big “stunt,” or quickly lunge at the player that is not his assignment before jumping back to his man.

If a big starts to make a bunch from three and it is really causing issues, the next step would be to get into rotation, i.e. closest player on the perimeter rotates to the popping player, the next closest defender rotates to the prior defender’s man, etc. That comes with trade-offs though. Ultimately, this is a coaching decision, of course, depending on one’s belief in regression to the mean or the shooter’s historical ability.

I easily get agitated with Teske when he does some awkward, clumsy, 7 foot thing, but I bite my tongue (for the most part) because he’s so effective in so many ways. Very pleased with his development over 4 years. I think Juwan’s insights and experience are taking it to a new level. All I ask is don’t throw him bounce passes on the move more than 3 feet from the rim.

I agree about letting Jalen Smith shoot (especially since he’s such a good OREB threat), but leaving Reuvers open I’m not so sure about. I imagine if he’s wide open he’s shooting more like 38%+ normally. He’s shooting 80% from the line and was 38% last year from 3.

If you look at our future top 100 opponents, the bigs (arbitrarily cut off at 6’8 or taller) who attempt 3’s are:

So the only teams that have bigs who consistently shoot 3’s (more than 2 3PA attempts per game) are Iowa, Wisconsin, PSU, Maryland, OSU and MSU. All of those players are 6’8 or 6’9 except for Smith, Garza and Reuvers and the only ones of those that are shooting well from 3 are Wesson and Garza.

So right now Garza seems like the biggest threat to be a true stretch 5 against us. Obviously shooting numbers can go up by the time we play those teams, a guy like Reuvers shot well last year, but this is where we’re at now. A lot of these teams are small to begin with, most of the bigs I mentioned are 6’8 or 6’9, but the only they could get a reliable pick and pop threat is if they went really small at the 5, which obviously seems problematic for other reasons.

The nice thing is that none of the elite teams we are going to face look to have a real pick and pop threat at the 5. Iowa is still Iowa on defense and can be beaten in other ways, Wisconsin has no offensive playmakers so you can probably trust everyone else one on one and let Teske play up on Reuvers instead of sagging.

Jalen Smith is a potential problem with his size but is shooting 2/15 this year and 24% on his career so you let him take that shot. The only elite team to have a guy is OSU with Wesson, but he’s a shorter guy who’s not overly athletic. I wonder if we see Michigan have Teske play up on Wesson to prevent 3’s and then just trust that Teske’s size and elite defensive ability will allow him to prevent Wesson from driving on him one on one. I also can’t imagine Wesson having much success in the post on Teske so I’d expect to see him on the perimeter more.

That’s fair. Was mostly explaining the idea behind the different type of shooters. Michigan doesn’t play Wisconsin until the end of Big Ten play, so we will see how his percentage stabilizes over the course of the season.

I’d be interested to see the types of threes he is shooting this season. Amtrak-wifi willing, maybe I’ll check out his attempts.

Teske probably still remembers the days that he practiced against Moe so that the adjustment might not be a difficult one.

Dylan, does Louisville have a good pop guy?

Have to dive into Louisville still today. Enoch has been starting and hit a few last year but he’s 1-of-9 on the year from 3. Malik Williams will also play some five and isn’t afraid to shoot them.