Game on Weds vs Illinois is a Big One

This Wednesday’s game, in a bit of a sleepy time, is one of the biggest of the year. For one thing, it’s one of our best 3 shots at a true B1G road win (along with @NB and @Minny), which are always huge. Second, it’s key in setting the tone for the beginning of conference play and keeping the confidence/rhythm going before a tough stretch @PU and vs MD. Third, we’ve done quite well vs. Illinois since Groce got there (6-1, though there have been a couple close games and of course there was that tourney game vs Ohio), they don’t seem to have dominating big men that could take advantage of our weakness, and the crowd probably won’t be the strongest.

Also, the swing games in the first half of the B1G schedule are @Ill, vs. MD., and @NB. I guess neutral vs. PSU, though I see that as a probable win, and @Iowa, though that’s a probable loss (although that is also a game where we will get a bunch of 3s and could win if we are shooting well). Assuming we win vs PSU (x2), Rutgers, and Minny, and lose @PU and @Iowa, we need to win 2 of the swing games to start 6-3. And a 7-2 start is fairly realistic if we beat Illinois.

This is a game we could win, probably will be slight favorites to do so, and could really use.

Few early talking points on this one… Thorne out is a good thing for Michigan.

Kendrick Nunn and Malcolm Hill together are a really explosive scoring combination. Both of those guys can fill it up.

This Illinois defense looks really bad. Ranked 169th which is 71 spots behind Michigan.

Yeah, Michigan should be able to get open shots and put up points against these guys, which makes them a pretty ideal opponent. Nunn and Hill are really good and have torched Michigan in the past, but I’m happy to let them and a couple other guys try to outscore us. Groce seems to want to do a lot of switching and hedging (like UM), and pressure the perimeter and extended (unlike UM), so when it’s not going well it’s like UM’s defense but with a lot of bad gambling.

I am really expecting us to beat the Illini. They have little interior presence and their depth is non existent. I’m sure opening game of the B1G will have them fired up and Hill is a very good player. If we can just persevere and limit dribble penetration, I think Illinois will run out of gas late. If nothing else, we should be able to out score them if we get even a few timely stops.

I agree this a a huge game and should tell us a lot about our prospects in conference play. To win on the road in conference play requires poise and toughness. it remains to be seen if we possess enough of those qualities at the moment.

To win on the road in conference play requires poise and toughness. it remains to be seen if we possess enough of those qualities at the moment.

Really curious to see how this team reacts on the road, but the good news is that U-M has already played a pair of true road games, both against teams that are better than Illinois.

Started working on the game preview for tomorrow and get the feeling this could be a big game for Moe Wagner. Finke is a pick-and-pop type of big man and Wagner might be a decent matchup against him if Ricky or other bigs struggle to stay with him.

Everything you need to know about the Illini season so far, from the home team viewpoint. 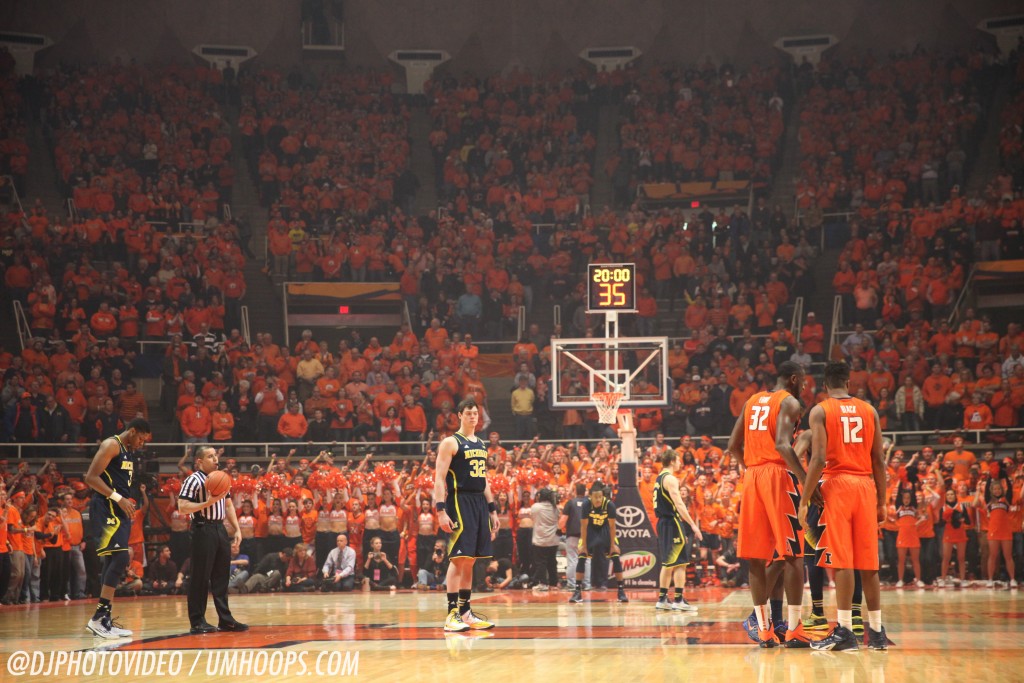 After a holiday season filled with cupcakes, Michigan will open Big Ten play this afternoon at Illinois. 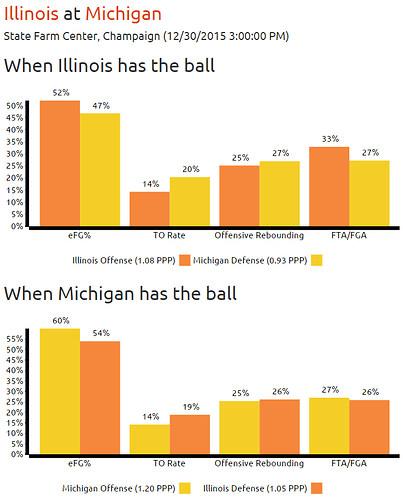 I agree this a a huge game and should tell us a lot about our prospects in conference play. To win on the road in conference play requires poise and toughness. it remains to be seen if we possess enough of those qualities at the moment.

How about that poise and toughness today?

Good win and especially good performance by Donnal. Congrats to him for finally stepping up his game and playing like he wants it. If he can sustain it that would be a huge boost because Doyle looks completely lost and Mo is too young.

It was a good first game and Any road win in the B1G is good but Illinois looked really bad. Let’s see how we fare against the upper echelon teams.

I’ll take any win on the road in conference play.