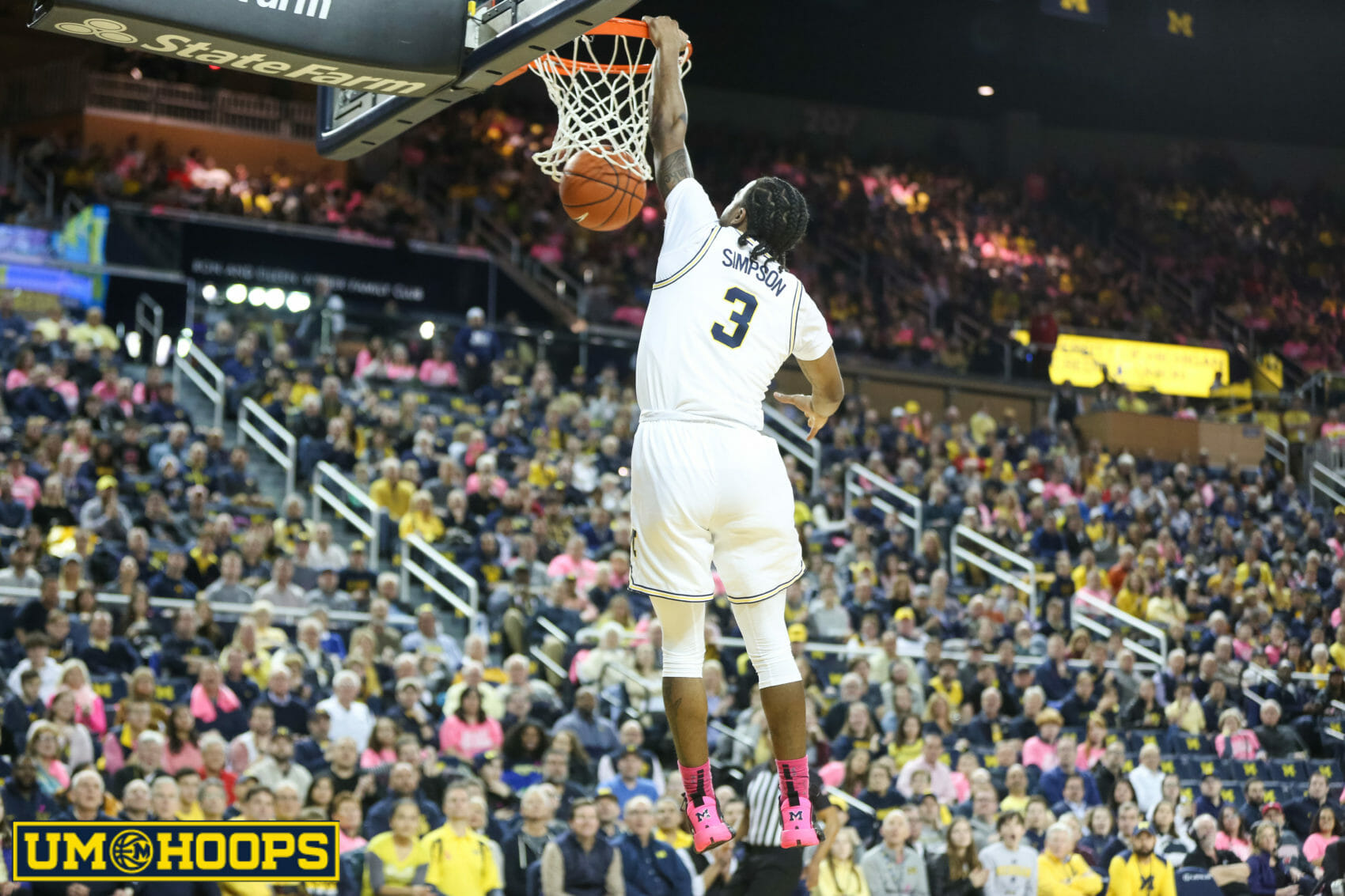 In its second-to-last home game of the 2019-20 season, Michigan started a lineup that hadn’t played together all season. The move foreshadowed the entire evening at the Crisler Center. The Wolverine defense reverted to its January form, allowing 1.23...

I just saw a guy on MGoBoard blame Simpson for the loss. I’m never going back on that site again I swear.

A guy called him a mediocre D1 player just earlier this week and I went off on him. Now he was being blasted by everyone at least

feels like colin coulda given us some minutes tonight

I don’t see how that would have ended up as a positive. This isn’t Rutgers stay in front of one guy, this is Wisconsin swing offense where every guy can shoot threes. Colin would have really struggled.

more so than davis defensively?

Tough game to lose, hopefully Brooks is a go Sunday. Definitely missed him defensively today. Not to optimistic about facing OSU, especially without Eli, I think a 1-3 finish down the stretch is very likely.

Hopefully we can make a run in the BIG tournament but we need to get healthy to do that. Livers clearly isn’t 100% and it’s hard to fault him for a poor performance tonight. Defense was a disaster tonight and it’s just mind boggling that our defense can be that bad with X, Teske, and Isaiah. X has taken a step back defensively this year which I think is a large part due to his importance on the offensive end. However Teske flat out just stinks right now. His confidence is shot and it’s ridiculous that a 7”1 265 pound man gets 2 boards in 22 minutes tonight. I don’t care what the analytics say, you can’t tell me Jon Teske hasn’t looked horrendous the last 2 months or so. Anyone who says differently needs their basketball IQ questioned.

I love X but he needs to at least be able to make 70% of his FT’s. If you’re a PG in today’s game you need to be able to shoot FT’s plain and simple. It’s unfortunate that his one flaw is such a crucial part of today’s game.

I think Franz is making a late push to get some draft buzz. If he keeps this up especially in March I think he’ll test the waters. I ultimately think he’ll be in AA for two years though.

Also I don’t get Juwans lineups at times. Playing Davis absolutely killed us and waiting until the last 3 minutes of the game to go small makes no sense to me. Those 3 Nunez minutes also hurt really bad. Finally why does it seem like a player always goes off against us? I’ve never thought Trice was a good player. He has a good shot but he’s inconsistent and of course the one day he shows up it’s when we play him. And also the amount of absurd contested tough shots makes against us in crunch times pains me so much. Seems like we can never catch a break.

Wisconsin played as disciplined a gameplan as a team can. Hit the shots when they needed to. That was a fine road effort.

That’s a good point about Livers being more effective at the 4 usually going up against bigger and less mobile players. He did look a little sluggish tonight but I do think his best position is the 4.

If he does come back, that could make for some interesting lineup decisions because Michigan potentially looks to be very frountcourt heavy. I would rather push players up a position than down like they did tonight.

I was able to attend the game tonight. Not having Eli took the heart out of Michigan.

That’s a good point about Livers being more effective at the 4 usually going up against bigger and less mobile players. He did look a little sluggish tonight but I do think his best position is the 4.

I think Matt Painter, who is my favorite coach in the Big Ten, realized this too. He put Stefanovic on him for that reason. Livers got some layups cutting across his face, etc. but it was Franz killing Boudreaux that really cost him. Will be interesting to see how teams handle that going forward.

Going a bit off topic here: I know free throws were a big part of tonight’s game, but I actually think free throws are kind of overrated in terms of impact; I don’t think it’s a “crucial” part of today’s game. I think the ability to get to the line is increasingly important, but whether a guy is a 63% FT shooter or a 75% FT shooter doesn’t matter too much.

I think that in fans’ heads, every single free throw miss accounts for “more” than its actual value of 1 point. Eg. When a guy rims out two free throws it might cause a lot of frustration and sighs, but if a guy rims out a three, I don’t think people care as much, when of course, it should be the other way around.

Also, when did Micah Potter become so good? I don’t remember him being anything at Ohio State and now he’s a knockdown 3 pt shooter and throwing down thunderous dunks.

I know he’s stuck behind Reuvers who is also good, but what could Potter do if he actually played more minutes?

I get you’re point and it makes sense. I was talking about down the stretch though. If he weren’t a liability from the line he could be much more valuable. The better percentage he shoots the more aggressive he probably is which means for FTA’s

Also, when did Micah Potter become so good? I don’t remember him being anything at Ohio State and now he’s a knockdown 3 pt shooter and throwing down thunderous dunks.

Seems like Gard hates his defense and loves Reuver’s defense which is why Potter is basically a specialist scorer. He’s been phenomenal offensively, though. A guy can improve a lot over a sit out year.

Definitely. If we’re going by W’s and L’s, he’s cost us a game this season (along with Wagner) with his free throw shooting. It’s even more frustrating that it seems like he’s regressed as the season’s gone along; I was much more confident earlier this season with his FT shooting compared to now.

Yeah it seems like he has been regressing. I thought he actually started shooting better earlier on too.

Didn’t watch a second of this game cuz of a work conflict, but from the sounds of it the big lineup was a disaster? I was a big fan of the hypothetical Josh Christopher, Franz, Livers, Johns, Todd switch everything massive lineup next year but would it be fair to say that’s not a great recipe for success after an elite Simpson performance + 4 bigs wasn’t enough tonight?