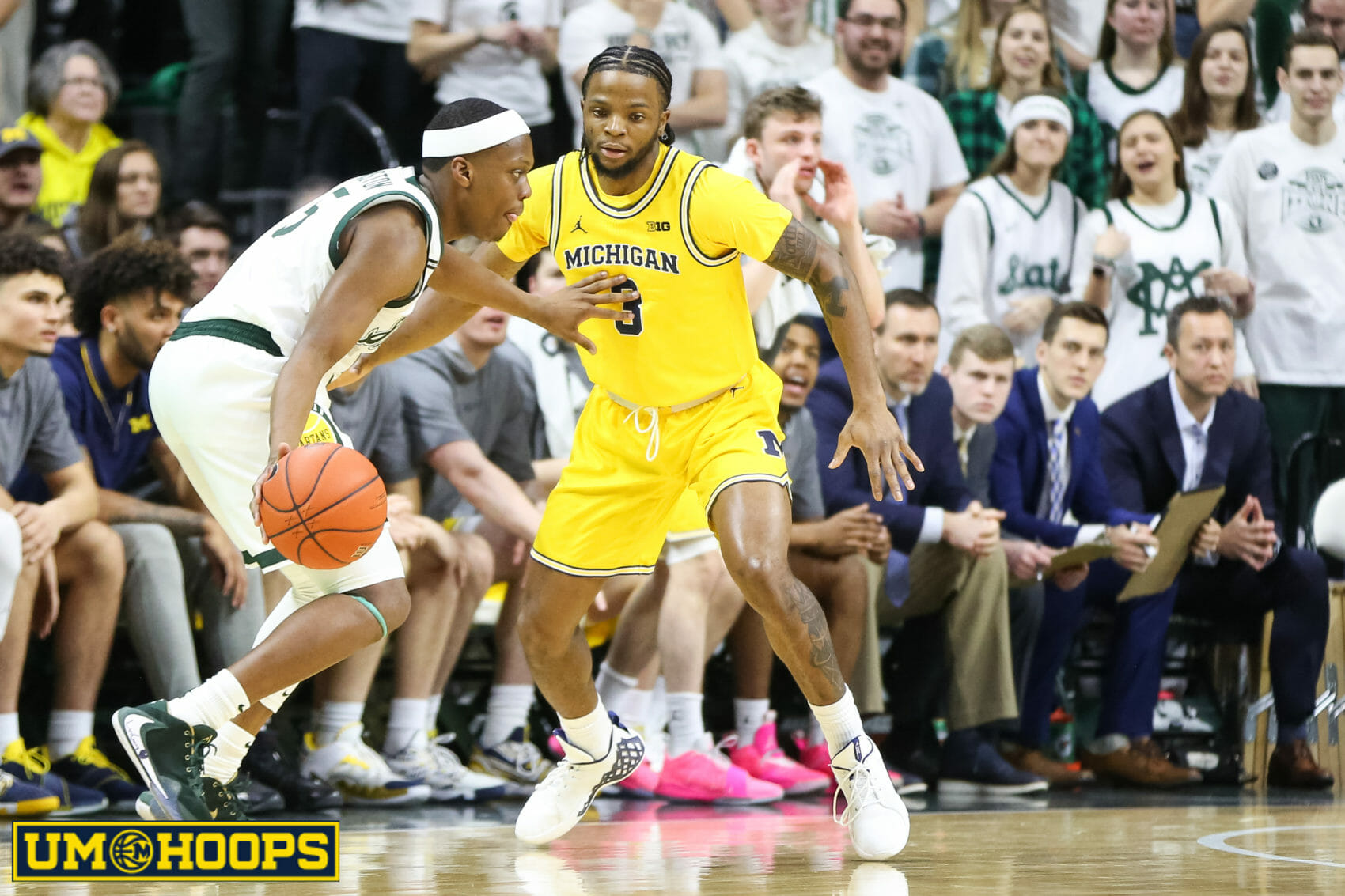 Michigan hosts Michigan State on Saturday afternoon (noon, FOX) as it tries to snap a four-game losing streak against its in-state rival. The two programs are looking to generate positive momentum during Big Ten play, and a rivalry win could do the...

We need a healthy Isaiah Livers for this game to lesson the chance of a stroke for us older guys here.

The fact is that MSU goes up a level in this game, while Michigan typically does not have an extra gear. The crowd really needs to bring it and the players need to empty the bucket for UM to have a chance.

The fact is that’s only been true for about 12 months. I do agree the crowd needs to make a difference though

I also see Henry, particularly, and even Watts on Simpson. Neither Brooks or DDJ are as likely to take advantage of Winston’s limited defensive quickness.

The results of this series the last decade have mostly been decided by who was the better team. That’s about it.

Each of MSU’s three road conference losses have seen them fall behind by 10+ in the early going (avg score at the 10:00 mark: 21-9). Michigan has got to break their bad habit of starting slow at home and jump out to an early lead to get their confidence up and the crowd fully engaged. A healthy-ish Isaiah Livers would no doubt be a great help.

The results of this series the last decade have mostly been decided by who was the better team. That’s about it.

The last few years have been an interesting case study of this theory. 2017-2018, I definitely thought MSU was the more talented team on paper, and until March they were more successful. That team was 30-5 and won the big ten, Michigan had 8 losses and finished 4th. MSU was loaded - Jaren Jackson, Bridges, Cash, Langford, I didn’t give us much of a chance, but Michigan swept them.

Then last year, I still will go to my grave defending that Michigan was the more talented team. I would say the trio of Poole, Iggy, Matthews was a lot more talented on paper than Cash + all their role players. Both teams finished the regular season with 6 losses, but MSU won all 3 against Michigan. Obviously MSU made a great run in March too.

I didn’t realize MSU led the country in assisted FG%, and clearly I’ve under-appreciated how good of a passer Tillman is.

Seems to me that having Eli, Franz, and (hopefully) Livers play great off ball defense is going to be just as important as containing Cassius and the typical focal points that come from what he does.

Yeah I think the more talented teams got swept both years, but in 2017-18 Izzo did a horrible coaching job and held back his team. And then last year, the Ward and Langford injuries forced MSU to play at their best, which involved having a generational point guard surrounded by knock-down shooters. You don’t need to be the most talented team if you have the single best individual talent plus a stockhold of 40% 3 pt shooters.

I still will go to my grave defending that Michigan was the more talented team.

More talented is a very different thing than better team.

MSU was definitely the better team last year, but not by much. I think we were winning at least 2 of the games with like 5 mins left. Should have taken at least one from them last year

With a healthy Charles in all three I think we definitely take 1 or 2.

Think transition defense is absolutely critical tomorrow if Michigan wants to win. Spent too long on this video, but hopefully you learn a couple things about transition D from watching.

In order for Michigan to have any chance of beating Michigan State, they have to do a much better job limiting MSU’s transition attack. What went wrong in the first matchup? Why is the Spartans' fast break so difficult to defend? Watch below: https://t.co/HbGv24ACwO
8 Likes
buckets12 February 7, 2020, 9:20pm #16

MSU was definitely the better team last year, but not by much. I think we were winning at least 2 of the games with like 5 mins left. Should have taken at least one from them last year

Yeah, if we hold onto two of those games, the narratives of the season are completely different. Or if MSU drew Texas Tech in the sweet 16 instead of the final four, their season probably ends a week earlier.

Obviously “if”s don’t matter and there was some magic in MSU last year to sweep the rivalry all off comebacks and beat that stacked Duke team. But 1-2 better 4 minute stretches of basketball by Michigan in any of those games might have changed everything

You alluded to it Dylan, but if I were MSU, I would have Aaron Henry guard Simpson as much as he can handle. Force Simpson to pass over length, pack the paint, and make Michigan shoot contested 3s.

I think Michigan needs to have a very good shooting game from three to have a good chance – something like 12+ makes.

You alluded to it Dylan, but if I were MSU, I would have Aaron Henry guard Simpson as much as he can handle. Force Simpson to pass over length, pack the paint, and make Michigan shoot contested 3s.

IIRC, they did that quite a bit in the last game, right? Henry got in first half foul trouble though.

What I wouldn’t give for a win tomorrow.

And for the love of God I hope it’s the last time I have to watch Cassius Winston play basketball.

Eric- this is great. The good thing about this, is that it is easy to fix. It doesn’t take talent, it just takes hustle and smarts. I sure hope the players watch this.

Also, on a made shot UM needs to hold the ball after it goes through for a second or two. You can do this and not get called from the ref. Subtle things make the difference.