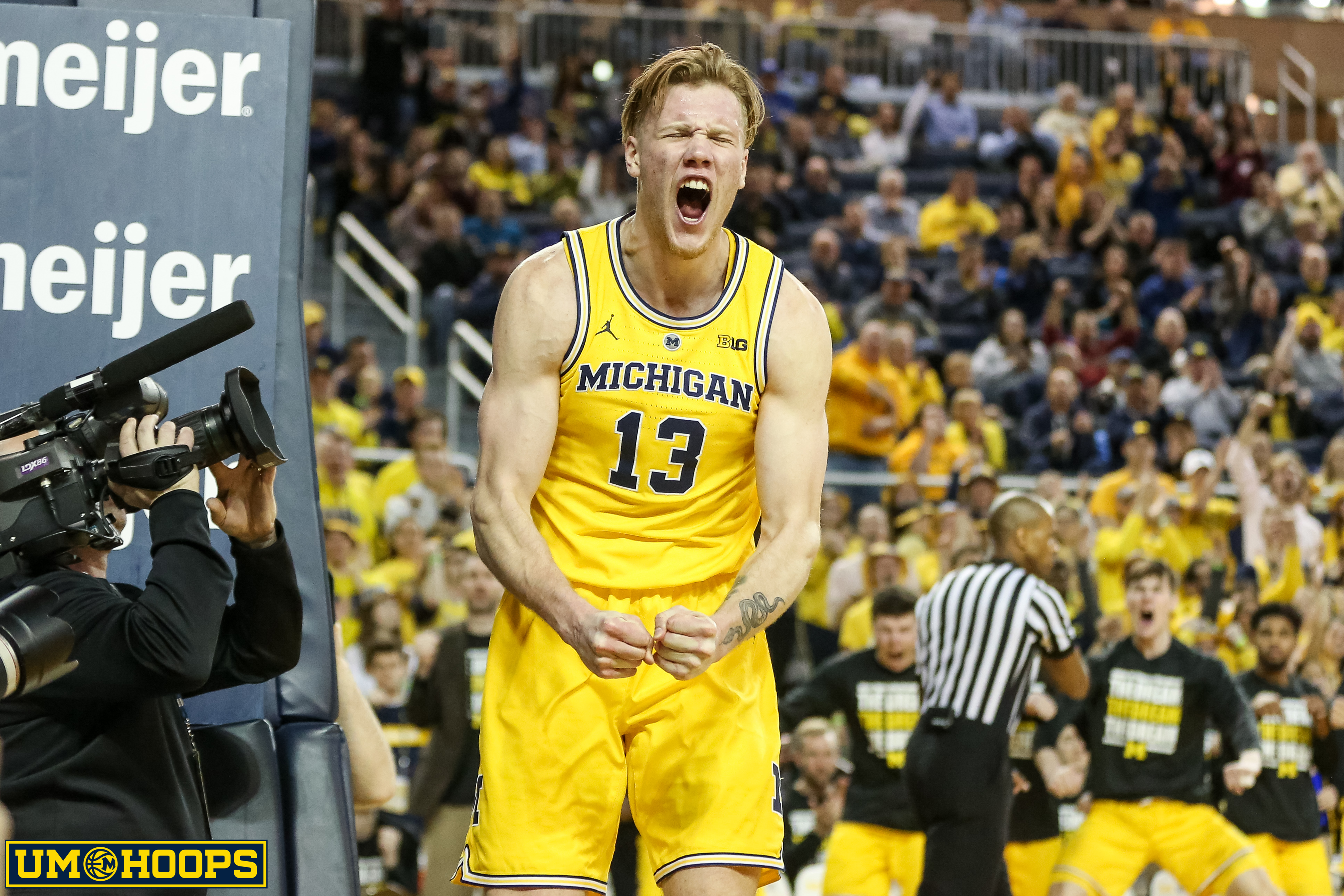 Michigan might have felt invincible on Saturday morning, but the Wolverines feel plenty mortal now. One loss almost turned into two on Tuesday night. Michigan could never find its shot against Minnesota, but its defense dominated the second...

Reposting from the open thread, since that had winded down by the time I commented:

Just re-watched all of Michigan’s possessions in the last 4:20 – when they went scoreless until the final shot by Matthews. Not nearly as bad as people thought and will say now/later on social media.

Possession 1, up 10: Killed clock for 17 seconds, which I am fine with given the situation. High ball screen with X and Teske… Teske is open on the roll for a patented pass from X around two defenders. X tries the reverse layup and misses, but it wasn’t a bad look. Floor balance leads to run out layup for Coffey.
Possession 2, up 8: High ball screen with Iggy and Teske with 14 on shot clock. Miscommunication by Minn defensively, but in my opinion, best ball screen find by Iggy of the season. Really good recognition and help contest by Coffey on the weak side saves an open layup from Teske.
Poss. 3, up 6: First two options don’t work out of the timeout (ATO). High ball screen with Poole and Teske gets blown up, but Poole drives by his defender and gets the foul call… proceeds to miss two FT, despite coming in at 84% from the line.
Poss. 4, up 6 (2:05 left): Poole high ball screen with Teske gets switched. Poole has the big, Curry, on him. Poole gets a step on him and Murphy helps from the strong side corner (not a good idea). Iggy gets an open corner three and misses – very good look.
Poss. 5, up 5 (1:30 left): Play is for Poole to set a back pick on Teske to roll to the rim. Minn guards it well. Worst possess of the series, ends with a Matthews iso from the top of the key and he goes up weak and stumbles on an up-and-under move, airballing the shot.
Poss. 6, up 3 (less than 1 min left): Michigan clock kills for 15 sec, then Iggy gets a high ball screen from Teske that leads to a switch and an open righty layup that Iggy makes 8 or 9 out of 10 times. He misses, but very good look.
Poss. 7, tied: last play of game. You all know what happens. Iggy gets a screen from Poole, who pops and is WIDE open. Both of Minn players stayed with the ball. Iggy decides to drive into heavy traffic and shoot anyways, getting blocked. Charles gets the rebound and hits the game winner.

TLDR; Michigan didn’t really clock kill and did get mostly good shots down the stretch.

IU lost their fifth straight tonight. It will be like playing a wounded wolf on Friday. It will be a war. Be ready with focus and intensity.

Completely agreed with the assessment. I think except the Matthew iso rest are really good looks that didnt went in either due to fatigue or just unlucky. Last possession is clearly freshman moment for Iggy and Beilein also mentioned need to improve in find the right play - to Poole in this case.

I feel we are still ahead of the old Beilein team schedule due to our elite defense and am confident we will hit on all cylinders sooner than later.

This team is a good team. However, is it an overrated team?

This team is a good team. However, is it an overrated team?

It feels that way to me. It’s been awhile since we’ve seen that team that wrecked Vill, UNC, GW, Prov, Purdue, etc. The bar got set pretty high there, but it is nice to know that we have that ability to be one of the best teams in the country.

But at this point, I wonder if we’re more like a 3 seed. Not bad, but not really a #1 seed contender. Who knows- I agree with Dylan, these slumps are part of conference play and confidence can turn quickly. They very well might go to IU and walk away with an impressive road win.

The back loaded schedule means that Michigan could play basically as well as it did early in the year and still finish with 5 or 6 losses. Not sure I’d even call that regression.

Made shots cure all ills. It was inevitable conference foes were going to adjust to Iggy and his drives.

Does he possess the ability to consistently finish over length and not just try to ram it into double-triple sags? We’ll see.

His maturation as a potential facilitator needs to continue to grow, as he’ll have increasing opportunities to hit the open guy going forward.

I’m wondering if more teams will mirror the Minny plan for guarding Z in the ball screen sets? Seems likely, cause now the blueprint is out there.

Transition run outs for scores are desperately needed right now for this team. Conference play is all about adjustments to foes who know your tendencies. Up to staff to make them work. 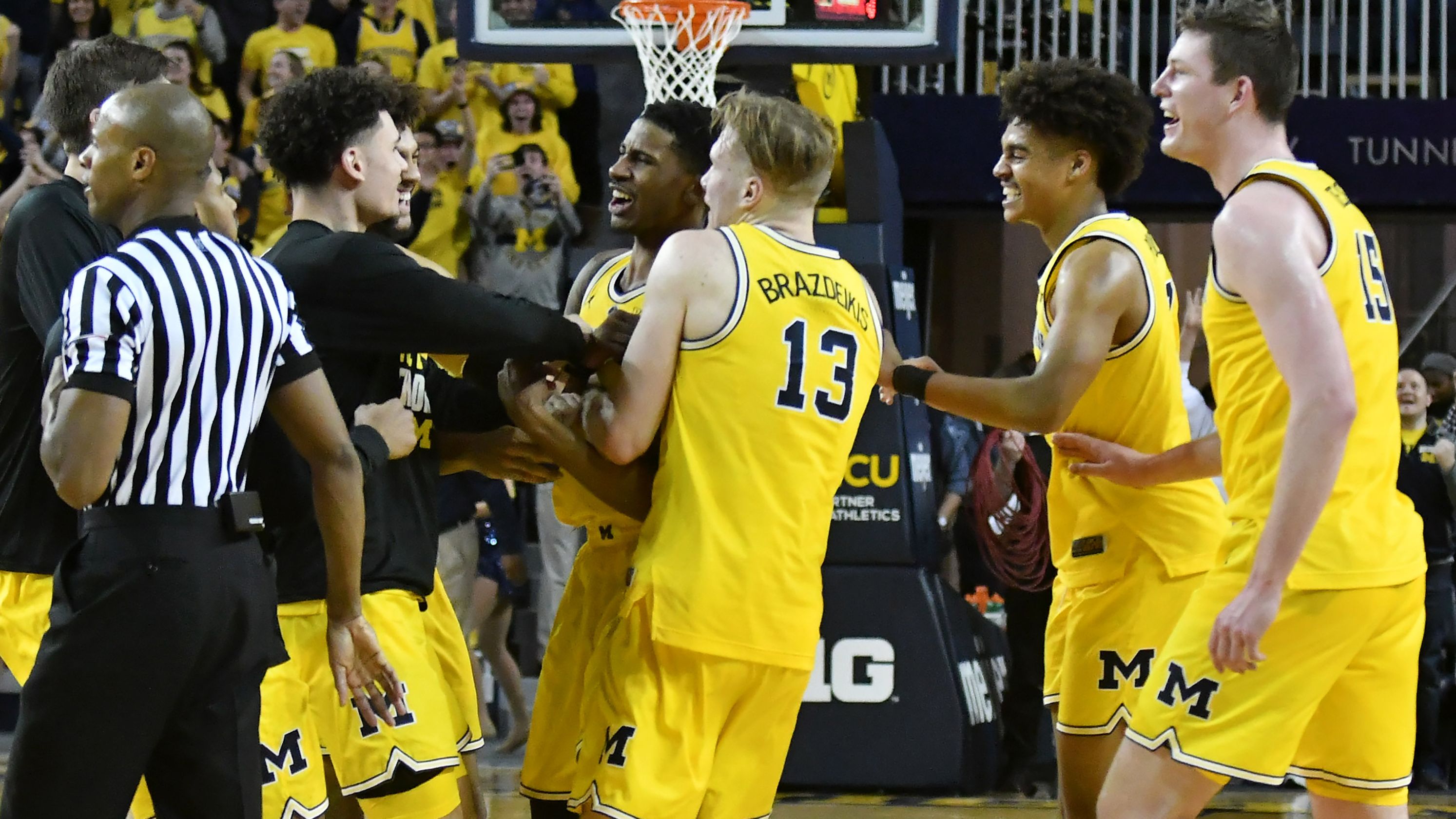 The offense is mired in a funk, which is reflected by a woeful 33.9 shooting effort in Tuesday's 59-57 last-gasp victory over Minnesota.

Charles Matthews was a -8 on the +/-. Hard to win that way. Glad he hit that shot, hopefully that helps turn around his season.

I’m hoping this is just a mid-season lull they are going thru, but am wondering if fatigue is setting in. Our top 6/7 have played a TON of minutes so far and last night they just didn’t seem to have the energy.

I’m not one to buy into the need for rest given how college basketball is structured (timeouts every 4 minutes, etc.) but I do have to wonder if our guys can effectively keep this pace up thru April.

This is probably the best time to have a lull, but it is also just some natural regression. Michigan was never the sort of team that was going to win every game by 20 points IMO. Defensive grinding team by nature.

I still feel like they play up/down to the competition. I’m hoping this is true and we run out the better teams in the league.

Adjustment time. It’s a bit of a quandary; the ball being safe in Simpson’s hands and Teske benefits residualy but the net effect is diminishing roles for Poole and Matthews. Just have to unlock the right mix. I haven’t a clue how to do it. I’m sure Coach Beilein does. Thankfully.

Beilein clearly and admittedly frustrated with decision making and effort. Playing great d then half assing down the court, negating the transition advantage is grating on the coach. Run hard young men. Run hard. Smell the easy basket if you hustle.

How about Livers? Once he learns to take advantage of mismatches he going to be a go to guy. He can create good opportunities for himself. I think he has the best looking jump shot on the team.

How about Livers? Once he learns to take advantage of mismatches he going to be a go to guy. He can create good opportunities for himself. I think he has the best looking jump shot on the team.

What do you see in him that screams go-to guy? I’m not sure the best avenue for him to create his own offense.

He has a great looking jump shot with good elevation and he possess a NBA body that can create space, I don’t necessarily think it’s going to happen this year, but it is only a matter of time until he starts using his abundant ability.
Thinking about the North Carolina game and all the hype about Nassir Little, then watching Little match up with Livers, I thought Livers was more impressive looking physically. In short, I don’t think Livers realizes yet just how good he is and can be.

His mental makeup will prevent him from becoming a go to guy. He just doesn’t have that dawg in him like an Iggy. He is content playing a role and not being the man. You need that borderline cocky mental makeup to be the man and he’s more of a humble, unassertive guy.

All Michigan really needs from Isaiah right now is to hit 40% of open catch and shoot looks and play good defense at multiple spots. That shot hasn’t been falling lately.

The guards are really looking for Teske more, both at the rim and from distance, which is great.

As chez says, it’s kind of a big deal whether the shots go in. Made 8-40 over last two games. We may not be a great shooting team but making 5 or 6 more over those two combined might’ve made things look pretty different.