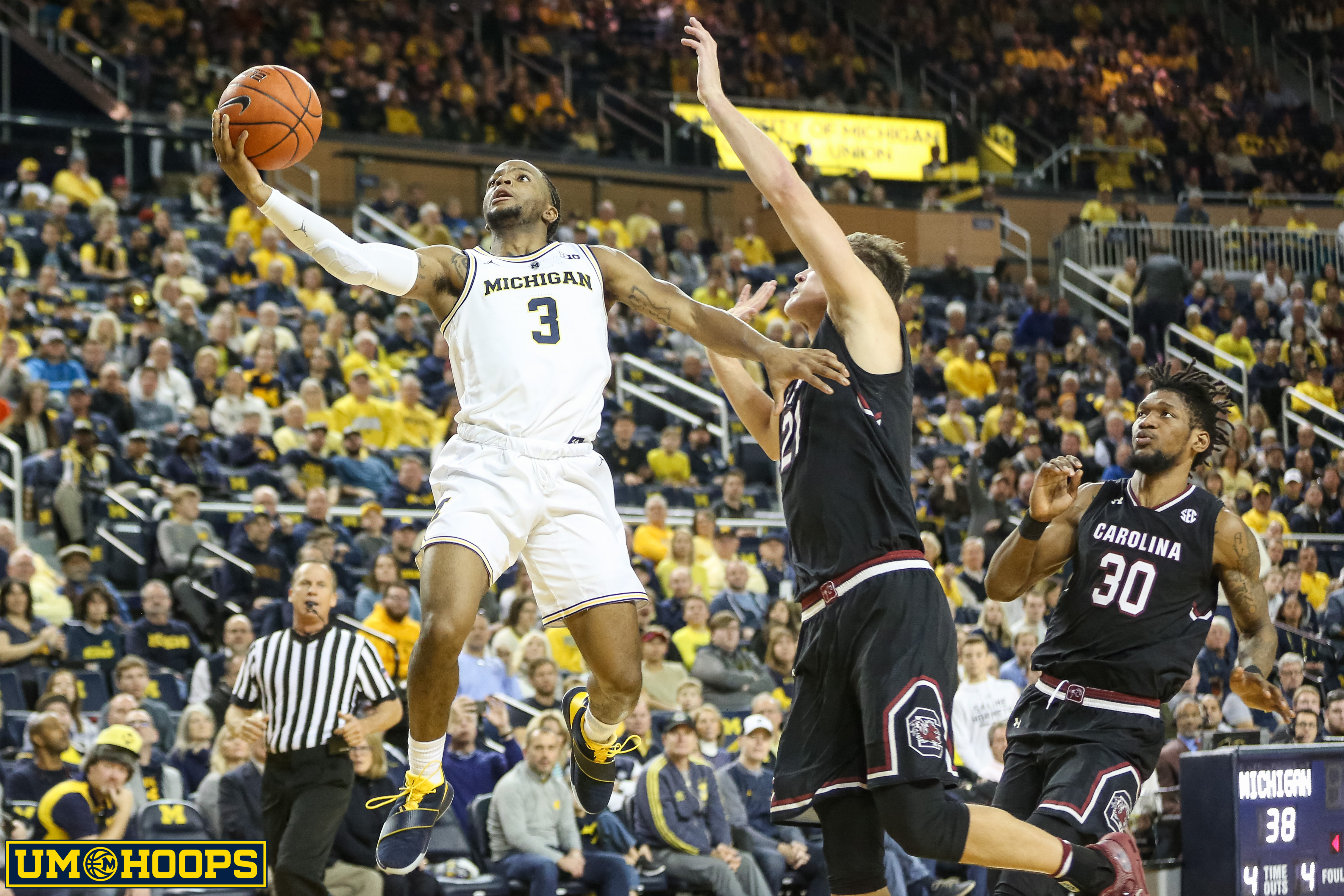 Good point about Brooks.
Based on Beilein’s comments, I don’t expect him to give Johns any of Austin’s minutes. They will likely come from Teske and Livers. Beilein sees the need to continue developing both Davis and Johns, at least until one of them pulls way ahead.

Simpson is becoming an extension of Coach Beilein out there. He gets it. He really gets it. He’s only going to get better understanding this offense and why Beilein wants him in certain positions on the court for spacing and ball movement. He doesn’t get rushed and he’s really good at the thing Beilein talked about: engaging 2 and seeing 4 or whatever was Beilein called it.

Iggy makes offense so easy. Silva would run at him on the perimeter and Iggy would go directly basket and get fouled. Brilliant. Elegant. Simple.

Absolutely agree that this a is great observation. Also like the thought on Davis is that there is no discernable “thing” he provides and M loses a lot of identity when he is on the floor.

How concerned are we on the depth? They essentially played 6 players today and that is cutting things really thin. It was definetly an issue at NW too. I am really concerned when the game comes that Teske is in foul trouble.

Would you say this is Michigan’s best offensive rebounding team in the Beilein era?

I thought Beilein miscounted when I first heard him say that, but I guess he means engage two defensive players and see your four teammates.

No way Teske only had three blocks. I swear I thought I counted three in one possession.

If one or two guys have an off night, we still have pretty good scoring punch, no to mention a good defense.

I’m a bit concerned about depth in general, but I’m not sure that lack of depth at the 5 is a big deal. It seemed to be an issue on the defensive end when Teske left the game with 4 fouls, but at the same time, USC had no shot at guarding our fivesome that effectively featured 5 players with perimeter skills.

The way that Teske is playing, there will be a drop off when he leaves the game no matter who we bring in. We just need someone to be steady and give us something, rebounding, outside shooting, defense.

My biggest issue with Davis is that stretch 5’s are bad matchups for him, but as Dylan noted in the recap so are skilled back to the basket guys. So what does that leave for him regarding good matchups? I’d have to assume with his limited athleticism that athletic rebound/dunk type guys aren’t great either, so I guess the only really decent matchup there is a Jordan Morgan type? Not gonna drag you around the perimeter, not going to go above the rim, and not going to try and post you up. That’s pretty much what UNC has when Maye isn’t playing the 5, does anyone remember how his minutes went in that game? The issue there is that Livers can guard that type easily AND handle stretch 5’s, plus he gives way more offense. There’s just not really a niche that Davis can grab onto right now.

I also don’t think Johns, or anyone on the roster besides Teske really, is the answer for guys like Silva or Pardon so I get why Beilein keeps trying Davis, especially in the NW game with Livers stuck at the 3. I’d have to assume Pardon would demolish Johns at this point.

If you just look at the last 5 games, Michigan’s offense is 4th in adjusted efficiency and the defense is 35th.

I think that South Carolina game really tanked our ranking

I wish we had a true big backup but I think many overrating the importance of depth in college basketball. This isn’t the nba, the games are slower, shorter and much less frequent. Plenty of elite teams in cbb only have 7 or 8 man roatations.

We looked tired yesterday, a step slow on a few possessions, and hands on our knees much more than any other game this season. This could be a variety of reasons from schedule, to depth, to mentality, to things we don’t even know. The positive is the schedule lines up perfectly for some rest and skill improvement.

One of the biggest question marks coming into this season was who is going to make shots from 3 consistently after loosing MAAR, Moe, & Duncan. Check out the 3 point % this season from the following players: Livers- 52% Poole- 47% Brooks- 41% Iggy- 39%

Not sure where this would go so I’ll put it here.

Poole’s also over 60% over the last five games. The shooting is looking okay as of now. Especially if Charles can hit some too.