Five thoughts on Isaiah Livers and the NBA Draft 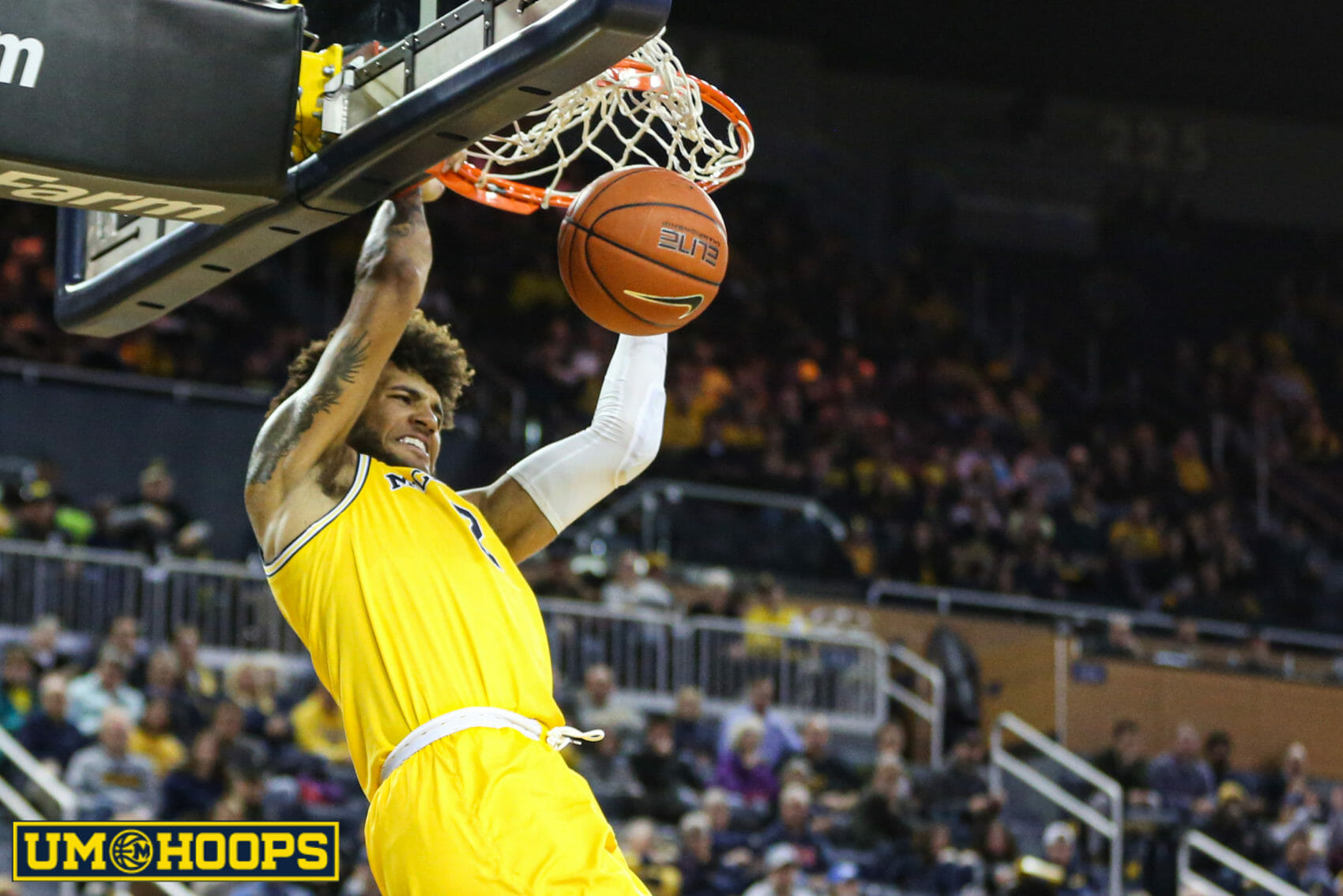 Isaiah Livers announced on Monday afternoon that he was declaring for the NBA Draft but leaving the option open to return. The 6-foot-7 forward has until early June to decide whether to remain in the NBA Draft, but his decision is the first major...

All good points Dylan as usual. There is no “right” decision here really and thus Livers and the people he trusts will have to make the choice based on whatever limited info they can. I will say, it never gets mentioned for marginal prospects like this the non-financial value of staying in school. If Michigan hangs some banners next year and he has some great experiences on and off the court, that’s still valuable. It doesn’t compare to an NBA contract…but if a player is destined for a vagabond career overseas either way - it might be.

I did a quick assessment of the last decade of Michigan players and by my count there were 13 NBA decisions made. (I’ll admit that I couldn’t remember very many guys who put their name in and returned to UM.)

By my count, 9 of those 13 decisions were obviously correct, 3 were unclear, and 1 was probably incorrect. That 1 was Charles Matthews, who had some really bad luck and it is unclear what would have happened had he stayed. But going undrafted and having to rehab an ACL on your own when you could have been at UM I deemed the wrong choice.

The three unclear ones were…
- Manny Harris - undrafted, barely played in the NBA, missed an NCAA tournament by leaving
- Darius Morris - made decent money, but didn’t play much in the NBA, maybe gets a higher pick and guaranteed contract if he stays a year…Michael Carter Williams did.
- Iggy Brazdekis - Dylan would say he made the right call at $2M/2yr and maybe he did. But he’s also a G-league guy for the worst franchise in the NBA right now.

So if Livers does go, even though most of us think he should stay, the odds are in his favor based on these data points. (I did count Mo Wagner returning after his sophomore year as the correct decision.)

Personally, I am not sure I agree with the part in #4 about expanding his ability to create his own shot, i.e. ball screens, iso’s, or off DHO’s, as is mentioned. Livers’ role is never going to involve any of those things in the NBA, and hasn’t so far in college. That’s why his usage has remained where it has.

I very much agree with Vecenie’s take. Isaiah’s path to being a higher regarded prospect is improving on the defensive end (is that possible at this stage?) and by becoming a better dribbler and passer. When I say dribbler and passer, I mostly mean so Livers is able to better attack close-outs and handle the ball & make decisions in transition if he grabs a rebound.

Livers made more on-the-move three pointers this season than I remembered, but in my opinion, his key to succeeding at the next level is improving on skills that are somewhat or very present, not expanding to new ones.

I think JB was happy to see Manny leave early. But I want to address this notion that because a guy made nice money on a initial contract that means he made the right to decision to leave.

$2 million or $4 million dollars sounds like a ton of money to all of us. It would be an insane amount for me too. But of course these guys aren’t making what their contracts say. 40%-50% is going to go to local, state and federal taxes. Their agents get a cut. They do what all of us would do at 20, and buy a few things they shouldn’t. None of them are set for life off a $4 million contract at 19/20 years old.

If the highest Iggy or Poole would ever be drafted is where they went last year, than I suppose they made the right call (not risking injury and such). But I think both would have flourished this year, especially in Juwan’s offense. Both would be in position to mature and be selected higher than last year.

It might never be Livers’ role in the NBA but you don’t think the ability to create any of his own offense would make him a more intriguing prospect?

I mean, of course, any positive development in a player’s skills is a good thing. I just don’t think NBA teams will be watching for those things if they are watching Livers’ film because, as we agree, it won’t ever be his role in the league.

In my opinion, he would be better served in development time working to improve skills that teams could draft him for than practicing to play out of ball screens, making ball screen reads, and isolation moves, for instance.

Here’s a relevant example — at Williams, Duncan Robinson played out of ball screens, off DHO’s, etc. When John Beilein was deciding whether or not to offer him a scholarship, I would bet he was focusing on Robinson’s ability to play in spot-up situations, namely catch & shoot threes — that would be his role on offense at Michigan. Shooting plus Robinson’s size were why Beilein was comfortable bringing him to Michigan, not his off the dribble skills that basically has not impacted his play at Michigan or with the Heat.

I guess my point would be that being able to do more than your role at a lower level is a good thing, even if you are projecting to a specialized role.

If a shooter in high school can’t handle at all and literally just shoots. I generally would expect it would be hard for him to play that role in college. Adrien Nunez is a good example of this.

Or if Duncan had only played the role he played at Michigan at Williams you would think of that as a red flag.

It isn’t that Livers is going to be doing these things in the NBA but if he’s able to create his own shot in college or play out of a ball screen and find a teammate, then he’s far more likely to be able to attack close outs or handle the ball at an NBA level.

I do think the difference between high school —> high major D1 is a lot different than high major D1 —> NBA. That is, HS is usually against clearly inferior players and at not close to your athleticism and size, so one should be able to dominate to a much larger degree.

Most NBA players are role players and project as such, regardless of everything they show in college.

JP got drafted by a team that will Be hard capped for the foreseeable future and thus will want to hold on to their young guys for a full 4 years, as well as it being a highly competent franchise. I really don’t think it’d be worth risking for JP to come back for a slight chance of moving up.

Iggy was older than JP and had less upward mobility on draft boards.

Livers showed some flashes this year putting on the deck with his left hand and rising up for mid range jumper that looked smooth. Maybe scouts give him benefit of the doubt that that’s scalable considering his volume of tape is gonna be so low from this year?

The part about GS being hard capped that’s just dumb luck for Jordan, its not something that could have been planned for.

And I don’t think its a slight chance at all. Unless he suffered a serious injury of course he would have improved and moved up. Iggy’s in the same boat. Its not like these guys were maxed out (which is the argument you could make for Matthews). They weren’t guys who “are what they are”.

$2 million or $4 million dollars sounds like a ton of money to all of us. It would be an insane amount for me too. But of course these guys aren’t making what their contracts say. 40%-50% is going to go to local, state and federal taxes. Their agents get a cut. They do what all of us would do at 20, and buy a few things they shouldn’t. None of them are set for life off a $4 million contract at 19/20 years old.

You can argue that it’s not that much money because of taxes and agent fees and whatever else (it’s still a lot of money) but the upside to get drafted a couple spots higher doesn’t change that dynamic much. Especially when you consider that you start earning money at a younger age (and will hypothetically be able to be a pro basketball player for more years rather than an unpaid basketball player).

If you get a guaranteed contract after declaring for the draft early you are in a good spot. As you say, what team you land on or anything else is just luck and something you have no control of.

With guys like Livers, Poole, Brazdeikis, it is unlikely that any are really playing their way into lottery status.

I didn’t realize that Livers was 22. After reading all that, I would lean to leaving. He’s such a good shooter and he’s so much more athletic than your usual “just a shooters” And UMs defense was clearly better with him on the floor that I doubt he would be a weak link on defense in the NBA.

(I know he looked bad at the end of the year, but I have to think a lot of that was all the injuries.)

Same. I didn’t realize he was that old either. Interesting for a junior that didn’t even do a prep year and just played regular HS basketball.

I think Sam is off by a couple months. He will be 22 in July. I’ll edit his quote.

Isaiah’s path to being a higher regarded prospect is improving on the defensive end (is that possible at this stage?)

I would say, yes, defensive improvement is very much possible at this stage in his career. Just take Duncan Robinson, as an example. Robinson improved on the defensive end both of his last two years at UM; he never became a “plus” defender but he started as a defensive liability his first year and improved steadily each year. So, yes, I do think that is an area he can continue to get better at, should he opt to return next season.

Even turning 22 in July would put him a year older than the rest of his classmates wouldn’t it?

Only a little older. Most boys these days born in September or after wait and don’t start school until they are nearly 6—and would be 22 the Fall of their senior years in college.