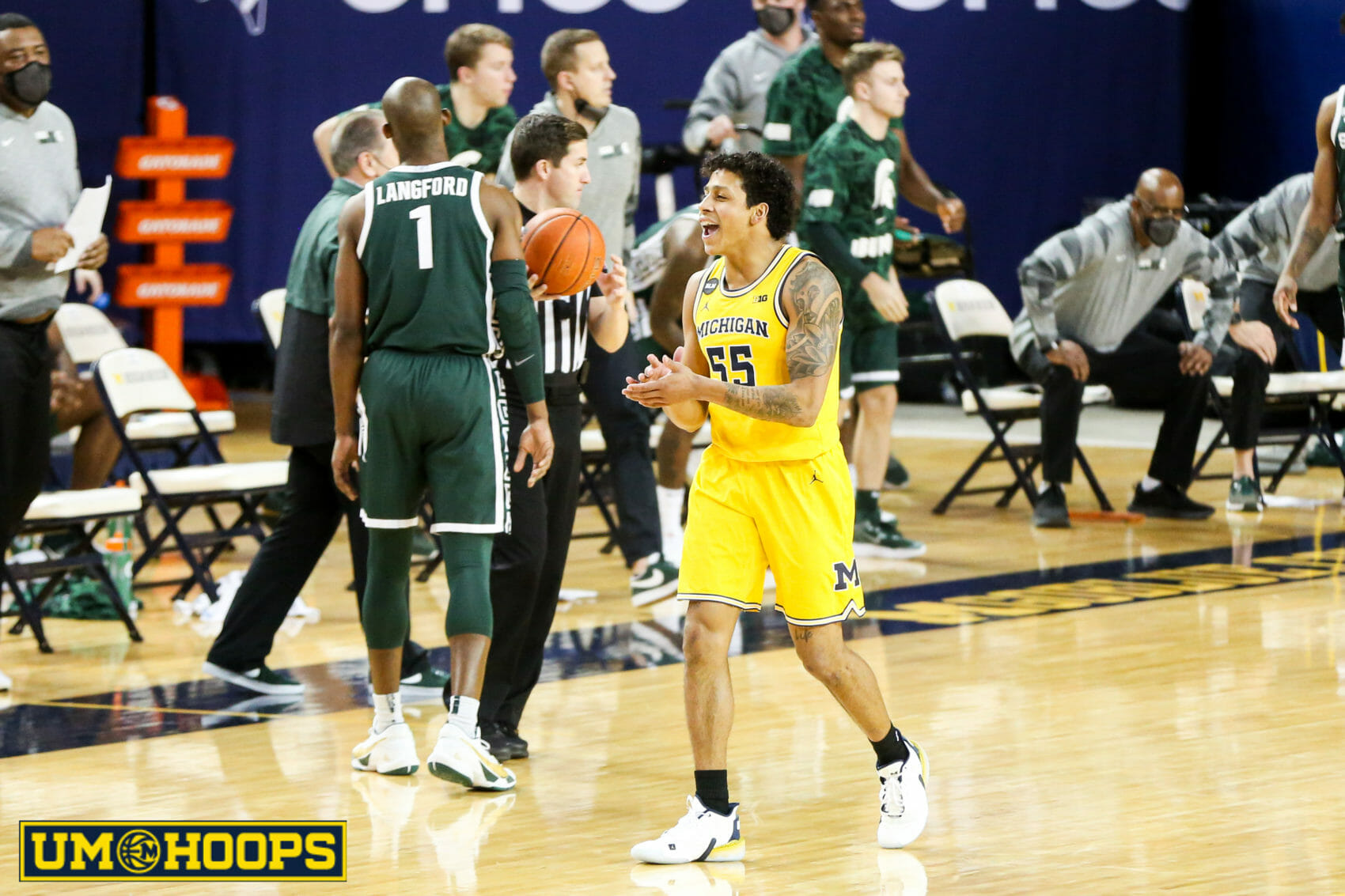 Just four minutes into Sunday afternoon’s game in East Lansing, Eli Brooks went up for a floater. When he came down, his left ankle had rolled over Marcus Bingham Jr.’s foot and, in a flash, Michigan’s season looked drastically different. Without...

Dylan has said it before, but at times it feels like Michigan forces the post offense too much early and then changes to ball screens late. Hindsight is 20-20 but I would have liked to see Wagner initiate more ball-screen offense early in the game (even though he had a couple of risky passes too). I also felt like they needed to seek out Livers jump shots more than they did.

For as great as this season has been…I feel as uncomfortable with the state of the team as I have all year going into the most critical part of the season. Brooks is hurt, Wagner might be hurt, Dickinson has been more erratic lately, the bench hasn’t provided much of a spark recently, we just lost to a bad team that we had crushed easily days earlier… I’m glad they get several days off to regroup, rest, and maybe scout themselves a bit instead of focusing on an opponent on short turnaround.

MSU is 14th in Kenpom Luck.

Eli has really put his body on the line for this team the past two years.

I wonder if it’s possible to quantify this overreliance on the post game. Because while I had felt it the last two games, I wasn’t so sure last night whether a) we weren’t going to it after failing to get looks outside, and b) whether it wasn’t the fact that we weren’t scoring in the post, either, that was troubling.

I do think they’ve lost a little of their moxie here, lately, and assume that other teams–as happens in the B1G–have figured them out a bit. Could be wrong (maybe TV has just muted the benches a little), but I’m not hearing or seeing the same level of enthusiasm or engagement from Juwan or the bench. Coaches should never say it for public consumption, but. . . we didn’t need to lose last night.

Hoping that some R and R provides a cure, but I won’t be surprised if we struggle in the B1G tourney. Happily–as wiser heads are noting–there’s a little time. Will be anxiously awaiting news on Brooks and Wagner.

In my opinion the constant post feeding is the #1 factor in the recent offensive issues they have had. The ball stops moving, and players stop moving. Also it leads to less open shots Bc everything is just stagnant. I’d be much happier if they would run more sets with high pick and roll and more ball movement.

I think one of the main factors in post play being less effective lately is the way teams are defending Hunter. It’s common knowledge that he is very uncomfortable going to his right. Teams haven’t been doubling much and are ensuring that he is challenged when going to his strong side (granted, I missed the Illinois game, so I don’t know whether that’s also what they did). I think Hunter gets a little more freedom to move when he receives the ball in the middle of the key rather than on the low block. I’d like to see more hi-low action, as opposed to traditional post entry from the wing, moving forward.

I tend to agree with this too. Hunter got a lot of touches early and none of them went down. Some were decent looks with a bad bounce, some were low % from tough angles or locations. Notice that Kithier never saw the floor either despite being an Izzo-favorite. They clearly had scouted some things, fouled him a few times when he did get to good spots, and kept him from his favorite locations.

It didn’t seem like much of anything with our offense was working early so it is a little tough to say that going with more ball screens was the answer. But what I liked about the Wagner ball-screens was that it challenges their scout. I have no doubt that they focused on post-ups and on Smith ball-screens. But eventually you start testing the depth of their scouting report and of how many players are put into conflict with your offense. If you get Wagner going and they decide to put Henry on him, then maybe Livers frees up.

I do feel somewhat optimistic with a tournament match-up against someone who’s not likely to have weeks of scouting reports from the B10 all put into action for one quick turnaround once we get into the big dance. But we’re going to need Eli healthy and the coaches to break out some new info.

I wonder if we’re seeing something of a weak point in Howard’s coaching/game prep. Obviously, the team doesn’t always execute the game plan or the adjustments a coach makes for a variety of reasons. But in this loss, it sure looked like Howard didn’t make/demand a change of plan until it was too late. That, and ultimately the coach needs to figure out how to motivate his players when things aren’t going so well. I’m sure Howard can and will learn from this and the Illinois loss.

Honestly while I don’t discount the various schematic stuff here, I also think seeing your teammate and key starter get carried off the floor when you’re aspiring for a national championship would get most people out of a proper competitive mindset.

Great point. I also think at that time the offense was already pretty ugly those first few minutes and Eli had most of our points. So it is possible MSU had a good plan and shut off some of our planned actions but Eli was the 4th option and found some gaps. Take him off, put everyone in a different role the rest of the game, give MSU some credit, fouls, etc.

I think people put way too much emphasis on the coach for an individual game, win or lose.

What do you mean? Izzo was a genius for teaching Rocket, Langford and Henry to knock down a bunch of contested long twos. Mr. March is back at it again. He’s just cut different.

This is the kind of snarkasm that I am here for.

EDIT: Yes, I do demand royalties for all future uses of that term.

Well, I do think it’s connected that Watts really shined after getting benched last time around. When Izzo can make a player really work hard to earn his minutes, he’s getting the most out of that player.

But overall I agree. Izzo may have put his team in a position to win, but Michigan did more to lose the game.

If Izzo was responsible for Rocket’s great game by benching him for the last 17 minutes onThursday, it kind of makes you wonder why he didn’t bench him similarly 2 months ago because, until yesterday, he had been horrific throughout the Big Ten season…

Rocket Watts was due to to show up for at least one game in the Big Ten. But i contend that if Eli does not go down Watts is not getting off as he did yesterday and at least not for 21 or so points.

Watt’s made some really tough off the dribble jumpers whilst being reasonably guarded. Credit where it’s due. In a game that close you imagine that maybe Brooks shaves a little bit off that point total and maybe just enough to swing the balance.

Are we likely to know if Brooks is okay, or is it just as likely that Juwan plays it super close to the chest and we find out at game time(s)?

I wouldn’t expect Juwan to talk with the media again until after Friday’s game.

Not really to do with Eli, just how things usually go.

I think we’ll get some players this week though.