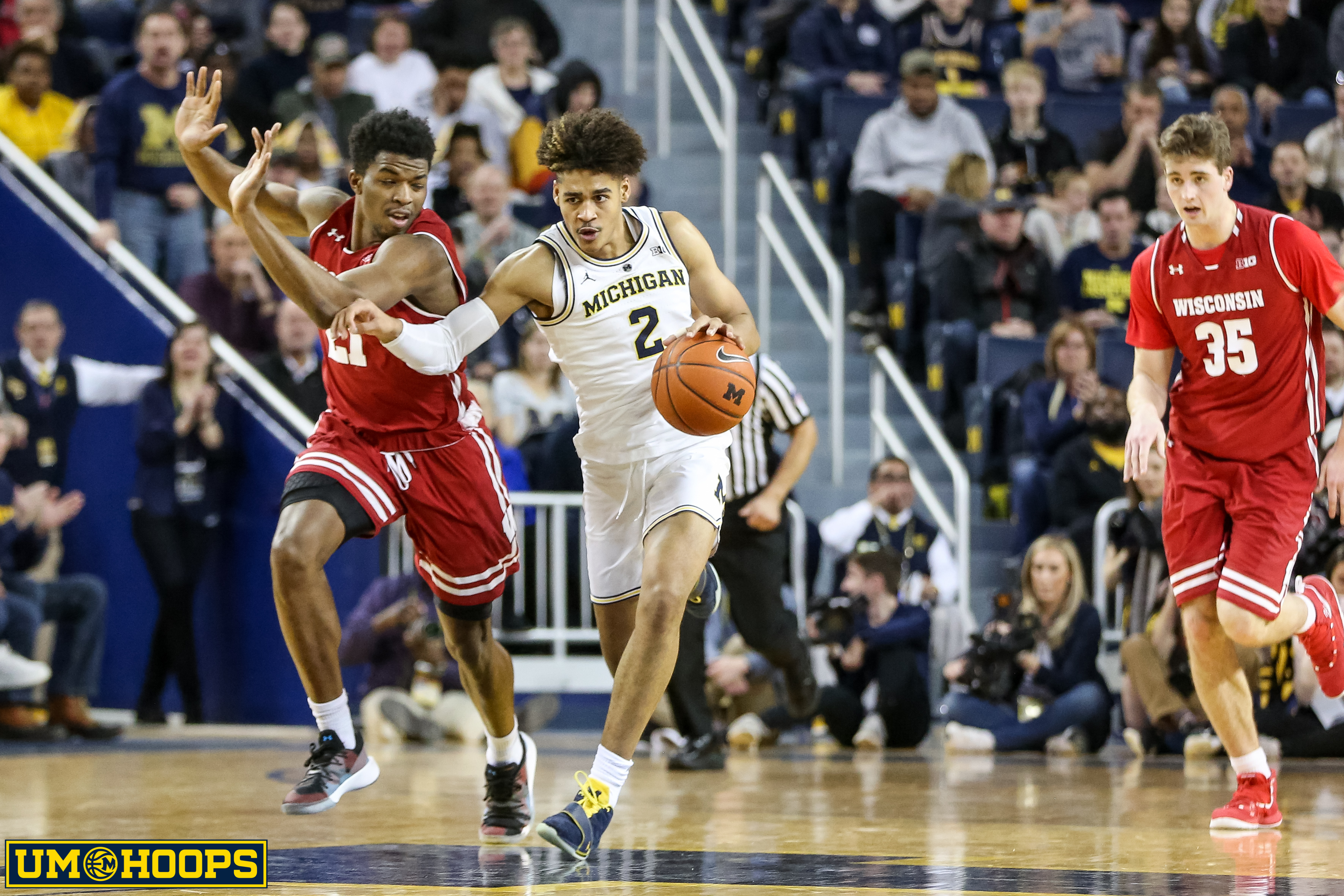 Michigan was upset on the road on Tuesday night, suffering a defeat 75-69 defeat at the Bryce Jordan Center. The Wolverines played their worst defensive game of the season and saw their head coach get ejected. Here are five takeaways from the defeat...

The sky isn’t falling, but this team’s ceiling is significantly lower if Poole doesn’t regain his shooting stroke. He needs to make shots.

The sky isn’t falling, but this team’s ceiling is significantly lower if Poole doesn’t regain his shooting stroke. He needs to make shots.

Good news is that “regaining a shooting stroke” is as simple as just a few shots going in. Just has to click for him.

I wonder if Poole is a bit tired mentally. He is still 19 and won’t turn 20 until June and seems like a bit of a lighthearted guy. Seems like he’s not far away though. In the five games before this, he’d hit 13 3s on 36% shooting. He got 4 assists last night after getting 4 over the last 5 games. And remember, he can’t pass to himself, so when he’s on the PnR people are sagging off X and sometimes Matthews too. It’s a long season, hopefully he (and the team in general) turn it on here for the home-stretch. I do think it might help that we only have 6 games over the next 24 days and can see the end coming into view.

I would say his issues are undoubtedly mental but I don’t know if I would use the word “tired” to describe them. Think it is more just mental immaturity, trying to force things and some frustration that things aren’t going his way. It is a huge step to be an every possession guy versus his role last year.

Yeah, that’s probably a better way to think about it, but it’s easier to be mature (focused and patient) for a week or two than 3 months, so when I say tired I mean more that his mental fortitude supplies have been tapped a bit and are lower. Still hope those reservoirs fill back up a bit as the end of the season comes into view. And hey, spring break can’t be too far away right?

Re: transition offense, I would love to see Iggy’s stats here. He looks awful on the break, and he’s really just playing his offensive game – tough shots at the rim and zero passing.

Re: transition offense, I would love to see Iggy’s stats here. He looks awful on the break, and he’s really just playing his offensive game – tough shots at the rim and zero passing.

50th percentile. The only player better than 56th percentile is Isaiah Livers. As I mentioned in the post, Simpson’s turnovers have been a big issue.

To be fair though some of those tos attributed to X have been fumbled on the other end or the receiver changing directions on him or a bad luck deflection. Going into the PSU game he led the B1G in asst/to ratio I believe. It’s a team effort .The leakers need to sprint to the other end and not jog every time. I feel that would make a big difference in transition O.

Iggy was noticeable in that film room post regarding transition offense. As in, noticeably out of position.

Iggy has had two down games now, but this one was partly due to his extensive bench time with foul trouble. He actually started out pretty well.

The problem is that the book is out on his game now. He doesn’t pass by nature and the few times that he has tried when actually attacking his passes have looked terrible; it’s just not something he’s good at yet. The consequence is that defenses can pack the paint without consequence the moment he takes a step toward the basket, so virtually all of his iso drives are now contested by two or three defenders.

When the offense flows and he can take catch-and-shoot threes and drive before defenses have time to adjust, he does better.

Yeah, I don’t think that particular efficiency stat really captures Iggy’s “contributions” on the break. Even so, considering his talent at finishing in traffic, that number is plain bad, since opportunities almost by definition should be better in transition.
As you say though, obviously the entire team really lacks in this area, not just Iggy.

I wonder…does Poole’s struggles recently and Iggy’s small step back put any kind of lid on possibly losing them to the draft this year…I think everyone would agree that we have surpassed where a lot of us thought we would be this year but I have to think that a probable Sweet 16 run plus knowing that we have X, Teske, and livers for sure coming back plus one or both of Poole and Iggy would set us up for a GREAT year next year…thoughts?

My guess is that a number of scouts who have watched Poole, and especially Iggy, in recent games have come away thinking that they aren’t ready to leave the college game. But, I think it’s much more important how they’d fare in the post-season testing process. Even if they don’t finish the season well, they could still go pro if they tested well and caught the favour of just one NBA team.

I feel like this team isn’t having as much fun as they had last year. Poole has been way more serious seems like there’s games where he doesn’Matthews is barely smiling (odd statement I know but look back at the tournament last year he smiled non stop during the games) and X and Matthews haven’t been getting in the face and being as showboaty as last year to me. Seems to me this team needs to find their edge again and have some fun.

Yeah that is definitely something to consider…I figure one way or another they will both declare without an agent to be evaluated but I would love to seem them both back for one more year of growth as players on both sides of the ball. I also have this weird belief that Poole and Livers friendship could swing Jordan to stay in A2 for his junior year…but money probably talks a lil more haha

The thing that no one is looking at. Poole is guarded heavily by every team now he is the marked man. Teams meet him at the 3 point line and he doesnt get open looks anymore. Plus in our offense he is asked to stand in the corner most of the time and wait for the ball to come to him. The fact that he is one of the better shooters in this class n create his own shot is better for the league. Need to run more plays for him

On the positive side…I’ve watched almost every game over the last 2 years and there have been many times where I never thought Charles’s offensive would rise to this level. It’s a tribute to him and his work ethic.

Just as an aside, you guys/we are so fortunate to have a team-specific site that provides such deep, insightful content day after day. It just does not really exist elsewhere, especially for a college team.

A ton of time goes into the posts Dylan creates and he is constantly coming up with new ideas, features, charts, etc. I feel like the guy is working every single day and it really shows in the quality of the work on the site and the community that has developed.

I would say AMEN TO THAT!!!

I sent Dylan’s breakdown of Wisconsin to an MSU alum friend and they were in awe at the quality of content.