Michigan’s picked up its eighth quadrant one win of the 2018-19 season on Sunday afternoon with a tough road win at Maryland. Here are five takeaways from the performance. 1. Michigan finds its focus After a Michigan State loss that was plagued by...

Do you think that Maryland cross-matched their defensive alignment just to try and keep Smith out of foul trouble? Morsell really isn’t a very good defender (especially on some of the late game sequences, he was out to lunch), and he was abused consistently. In the end, Smith only played 20 minutes (and 2 first half fouls), so maybe they simply don’t have anyone that can guard Iggy.

I asked this in the podcast post also: now that we have Castleton as the back up 5, is Johns going to be switched to the 4 to grow some depth this year at the 4? Seems like it would be a good move, especially as long as Matthews is sidelined and Livers is needed there.

I don’t want to overreact too much… but Colin Castleton. Dayum. Kid can play–and Saddi deserves a ton of credit for his footwork in the post. Kid keeps the butt down, hands up, never brings the ball down, great drop steps… We haven’t even seen his range yet. I’ll start making NBA predictions after the start of next season

He really looks good and he’s banging against the best defensive 5 in the B1G everyday. IMO he will only get better. Saddi deserves a ton of credit for the bigs. Teske has a solid base and was very difficult for BF to move. I could be wrong but Bruno banged JT really hard on several occasions and he bounced back…that wall is tall and strong! I was so proud of how JT held his ground and I think that’s why CC will much better. CC has to move his feet and use that up and under move to beat him in practice. Simliar to the way Happ plays but with the three ball…he could be special.

From what I have heard he can stroke it from three. So, what else is new. That’s what Coach B recruits, fives who can stretch the floor.

My biggest takeaway from Maryland is the pic you posted with this article.
Great photo 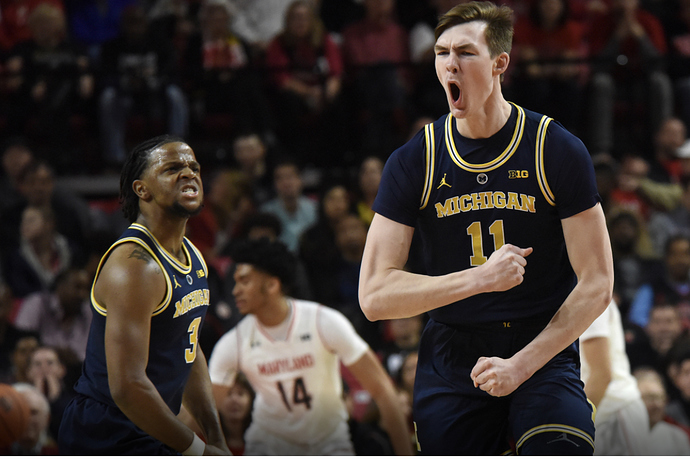 I noticed this during the game, watched it on replay again today, and loved it! It exemplifies the fact that X is the leader of this team and he brings out the best in everyone around him!

Amen! Couldn’t have said it better.

Small takeaway: Seems like our free throw shooting troubles are largely behind us now. Not that we are a great shooting team, but the days of multiple sub 50% shooters are gone and it doesn’t give me a heart attack when teams start fouling us late anymore.

Correct. Unlike last season where the FT shooting was awful all season long (66% OVR/68.5% B1G), Michigan is now at 73.7% from the stripe in conference play, good for 5th in the Big Ten. Here are the numbers for guys who have have attempted double-digit FTs in league play:

I remember feeling cheated that he shot 2/4 against us in Madison, 1/4 would’ve felt way better. Also in Madison: Michigan shot 4/11 with Teske 3/6, Matthews 1/2, and Simpson 0/2. Not sure how many of those were front ends, but cant help but feel like it would’ve been a different game if we shot 8/11 as our B1G average would suggest.

Giving a shout out to Jon Teske…he is a true competitor, maybe they call him big sleep but gives everything he has. He is also from the Cleveland Ohio area, yea !!

There is NOTHING sleepy about the way he’s playing this year! HUGE shout out! Not a big fan of Ohio in general, BUT, boy we sure have a nice Ohio connection between X and JT!