Actually a very good story. Talks about how big the of a turning point it was when we went up there in 2011 and won at the Breslin. Says that basically turned the tides in the rivalry. Definitely worth a look.

Michigan State has owned the state when it came to basketball. But Michigan has closed the gap, both on the floor and with its facilities, making the in-state rivalry feel more like, well, a rivalry. 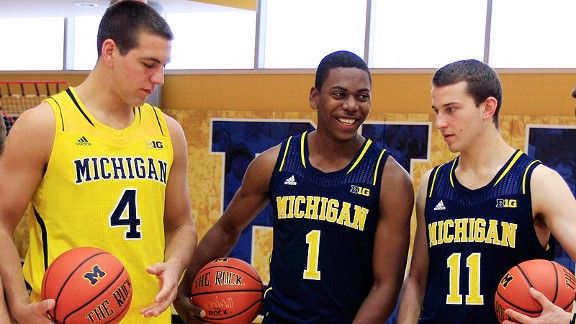 Bradford Doolittle previews the 2013-14 season for Michigan. John Beilein has positioned the Wolverines for a long run of success.

Read the article. As many MSU fans will be quick to point out, “turned the tides” may be a bit strong. Sweeping MSU this season may be a more compelling argument. Tall order though.

Glad to see rivalry evening out. But I’m still bitter over the game izzo left Mateen and the crew in to the very end of a 50 pt. blowout. Plus he never misses a chance to “preach” to the choir when it comes to beating UM. JB is just classier in my opinion.

if izzo doesn’t start landing some solid recruits it is not going to be much of anything in a few years. If this class is anything like last yrs they could struggle for the next few yrs. last yrs class was horrible and with everyone of any value leaving after this year they will be mediocre at best…valentine and costello need to become very very good players overnight if they want to have a realistic shot of being a decent team

The programs are even…

They have close to the same…

They just wNt to point out the past decade, but will go no further then that because it Dosen’t support their argument.