I know I’ve been critical of him recently and it was earned, but I’m also man enough to give him props bc he is earning it keep up the great play young man.

Sure does. Thursday brings a Big Big test.

Mark Donnal is 17-of-22 on two-point attempts and has 17 rebounds in two Big Ten games.

He made 13 twos in the first 13 games this season and made just 25 twos last season.

His emergence has been really surprising and sorely needed. Looks like he is finally taking the good things he apparently showing in practice to the game floor. Hope he keeps it up!

He’s been a huge boost, and it’s not even like he’s playing like an NBA level big man all of a sudden. When this offense is running well, we just need our bigs to come off screens well, get good position, catch the ball and finish at the rim. Nothing fancy, nothing dominating, just good, basic basketball, but for some reason, we’ve had a hell of a time getting it from our bigs lately. Glad to see someone is finally getting it done inside and hope it continues. As long as we keep killing it from behind the arc, I think it will.

On one play, as soon as the big came out, Donnal slipped the screen and was wide open for an easy pass and lay-up. SMU did that to us a couple of times. The other thing that makes that work is the shooters we have causing the defense to hesitate on help.

His offense has definitely been huge to this team diversifying the offense. I actually thought Doyle had been doing a good job in terms of understanding the offense and getting in position to score but the problem was every time Doyle catches the ball (if he catches the ball) he brings it down. Donnal has been outstanding with catching the ball and keeping it high or getting it high quick.

Maybe the bigger surprise to his emergence is his defense and rebounding. He has just looked so much more assertive and aggressive going after the ball. Against penn st he had a very hansboroughesque rebound that I never would have guessed we would see out of him. 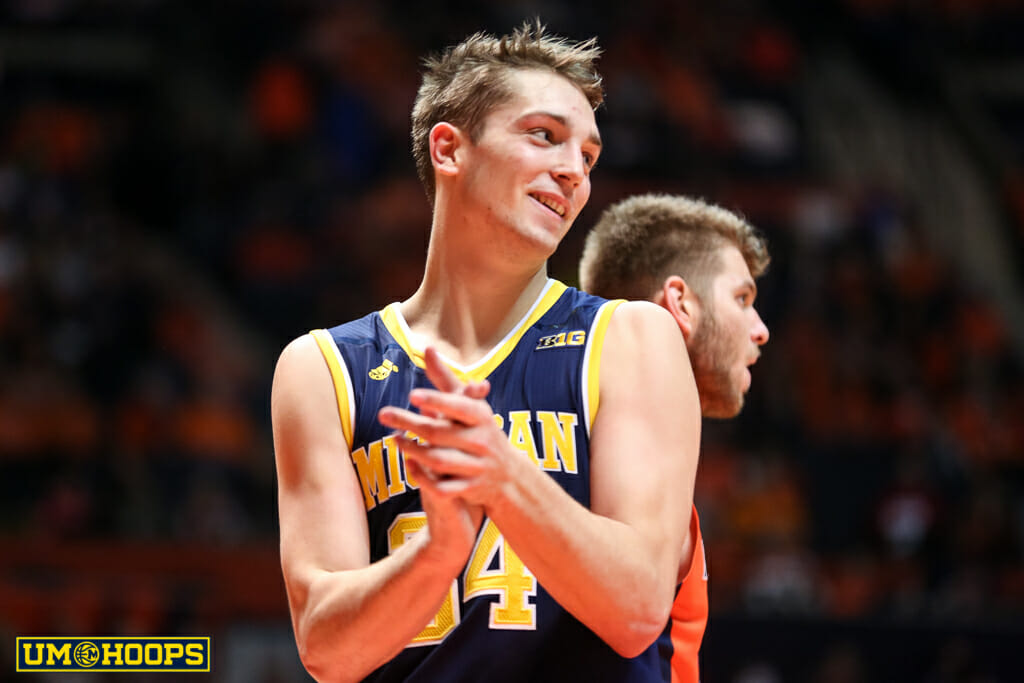 Through the first week of Big Ten play, Mark Donnal is ranked fourth in scoring and fourth in rebounding. The 6-foot-10 junior has scored 42 points in Michigan's last two games, nearly matching his non-conference scoring total of 43 points in just...

Donnal’s start is impressive and if he keeps it up, this team could be 13-14 caliber on offense. That game against Penn State reminded me of the joy I got from watching that team. Outstanding passing and shooting. Just great team play.

However, I don’t buy it yet. I haven’t forgotten the past year and half where if someone so much as breathed on Donnal, he would miss layup after layup. If he is passable against Purdue, I’ll be convinced.

Encouraged to see Donnal catching passes and finishing buckets, grabbing boards, showing some emotion and even blocking a few shots. Still, before anointing him a worthy successor to Morgan, I’d like to see him set solid screens, muscle up opposing seven-footers, and finish with two-handed dunks instead of just layups. I can take or leave the three point shot.

No matter how bad Illinois’ front court is or how Penn State’s bigs were uninterested in protecting against slip screens I still can’t remember the last time a (non McGary) center of ours got consecutive high scoring games like this against Big Ten Teams. I mean Penn State had an effective field goal % defense of right around 50 in the country, yet Donnal still did well. I hope as his inside threat increases we can run more outside stuff too, as that threat of a pop opens up the rolls and slips even more.

Just a question – and pardon my ignorance – what is the difference between a slip and a roll?

Rolling is the standard roll to the basket that you think of after setting the screen and the ball handler comes off.

Keep it up big Mark , Doyal on the other hand has been bad.

Wagner looked far better than Doyle today. Donnal missed a couple bunnies early but hit some tough reverse layups in the 2nd half.

Donnal for sure deserves props.

I think the staff deserves some props, too. They took a lot of heat for the lack of development from our bigs and Donnal has shown some really nice improvement.

Donnal has been huge. Looks like the lightbulb finally went off. I have no idea what happens to Doyle.

It had been said numerous times going into the season that a reliable amount of points from the big would be a huge difference maker for this team. With LeVert out, that is proving to be very very true. So happy for Mark.