Am I the only one scared that it might be a bit more serious than what coach is putting on?

The fact that they don’t know what’s wrong a few days in is really concerning.

Yes, definitely worrisome. Beilein was pretty cryptic which isn’t unusual when it comes to injuries, but if it was your garden variety ankle sprain, I would think they would have said as much. It also wouldn’t require a battery of tests and further evaluation. Hopefully, it’s not his foot again or the dreaded high ankle sprain. LeVert has played so well this year and has a bright future ahead so hopefully he can come back soon for his sake and the team’s.

Beilein was definitely cryptic when talking about it… A lot to digest.

-Didn’t look like he was in a boot, which was interesting, just shoes.
-Seemed to imply that he got x-rays, but didn’t say they were negative. That’s a bit concerning.
-He also said something along the lines of ‘we decided he wasn’t going to play because he didn’t practice’… that makes it sound like a genuinely day-to-day thing.

My gut feel is that he tweaked the foot somehow and it hurts, but they aren’t exactly sure why it hurts so they’re being extra cautious.

Any idea if this sounds like a lis franc injury? That’s obviously a worst case scenario.

Very unlikely imo. #1: If the injury is from the end of the Illinois game it’s almost certainly a typical inversion sprain. #2 It sounded like from Beilein’s presser that Caris has had an MRI done on the foot - that would have shown a Lis-Franc. There are different severities of that injury, but Caris would almost certainly be in a boot if that were the case.

I’m not scared without him. The ball and passing actually looked better without him. I think everyone defers to him to much when he’s out there sometimes. This team is so deep and balanced they shouldn’t defer to anyone. Levert can over dribble too. This offense showed how dangerous it can be when it keeps it moving. So many guys can kill u. That being said I hope it’s not serious as the guy is clearly a play maker and plus passer himself.

Could it be an Achilles?

You’re “not scared without him?” I’m not “scared” either but, seriously, he’s a great player and this team is and will be so much better with him that it ever could be without him. Having said that, not having Caris yesterday was actually good for the continued development of this team. MAAR stepped up big time, Irvin showed what he showed at the end of last year, Duncan showed that he’s capable of so much more that just being an assassin from beyond the arc. Oh where, oh where are those naysayers who thought we wasted a scholarship on him now?!? He is so much more than just a shooter. Aubrey stepped comfortably into that sixth man role. Other than DWalt’s struggles, the team played with great confidence and poise, but make no mistake about it, we will be consistently better when Caris returns. I hope for both Caris and the TEAM that he has just a minor tweak and he’s back as good as ever as soon as possible. Go Blue!!!

The fact that he played most of the Illinois game even after the injury makes me hopeful that it isn’t a major injury. Maybe Beilein’s being cryptic so Purdue doesn’t know exactly what to prepare for; You take any advantage you can.

He was pretty hobbled out there though. I’m not sure why they left him in, when we were up ten or so. It looks like an ankle sprain but how severe who knows.

I’m not disagreeing, it’s obviously better to have your best player then not in the long run. I have a lot of faith in Dawkins and rahkman to do great things in relief. Also like I said sometimes when he’s out there it looks like guys sit back and watch or defer to him as opposed to making plays.thats not his fault I know but still it happens imo. Let’s see what happens in bigger games when things go bad and he’s not out there. But I’m very confident in this team as is too.

Duncan’s passing is huge by the way. He’s actually kinda quick with the ball too. I could see him developing a to the Rim game next year. I was never skeptical of the pick up because I at least pictured him chucking threes in the corner but his head fake and vision is filthy. If guys keep moving well particularly donnall lots of lay ups to be had.

Something that occurred to me on this topic that is helping me keep from reading TOO much into any news/lack thereof for now. This definitely has farther reaching implications than just Michigan’s season on what information is released now. Caris is a senior and has NBA plans. If this is the same foot injured (which I think it is) from the previous two times, then that becomes much larger of a red flag to NBA teams for them to have to explain. It’s probably best the staff make sure they get all their ducks in a row on figuring out what happened before releasing something that could impact Caris’s prospects.

That said, I think there’s a big ten teleconference this week before the Purdue Presser, yes?

Caris’s injury happened in the last few minutes of the game. If it was an ankle twist/sprain, playing the last couple minutes is unlikely to make much difference, though resting it a few days will.

If it’s anything but the ankle, could be time for serious concern.

That said, I think there’s a big ten teleconference this week before the Purdue Presser, yes?

Beilein is due on the teleconference at 11:20 today. 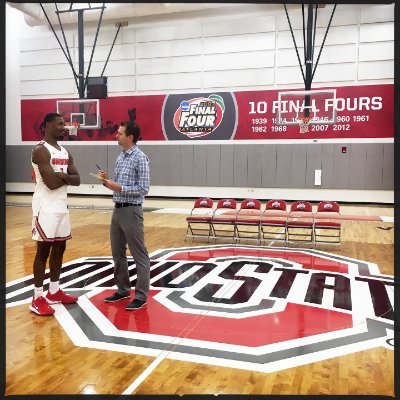 Just looked up at our schedule. Definitely hardest stretch coming up. Bad timing for an injury. lets hope they play with confidence. Also against Purdue do you think it’s out of the question we try to match up bigs with them? Or we for sure taking our chances going small versus them. Honestly I know it’s not a great match up for us but talent wise I think we can match them, it’s just their strengths are our weaknesses. Can Hammond really come out and guard Irvin or Aubrey? I think not. Let’s just hope outwhole team puts their hard hats on and goes after those boards as a whole unit and scraps together a decent performance on the glass. Toughness and hustle will be at a premium.

I think it was a pretty good time for a minor ankle injury, if that’s what it was. My hope is that they looked at the schedule after Illinois and realized that could get Caris almost two weeks of rest with only two missed games if he comes back against MD at home (or even a full 8 days just by skipping PSU) and thinking that they could get PSU without Caris. I hope Caris is back for that MD game because that’s one of the best and likely chances for a real quality win.

As for PU, I don’t think we’ll see Donnal or Doyle or Wagner at the 4 if that’s what you mean. They don’t play Hammonds and Haas at the same time so it’ll be Swanigan on Irvin. Double down in the post, goad them into taking threes, which they will – Swanigan likes to fire some up, which pulls him away from the basket. Then box out and try to rip and run. Maybe use their aggressiveness against them with backdoor cuts and picking up some free throws. Could be a game where MAAR has to show he can pass if Caris is out.Make their guards make decisions. But forcing jumpers and preventing offensive rebounds is the key to me, sets everything else up.

Beilein on LeVert: He is one of the most mature young men I've ever been around. ... He's working like crazy in rehab to get back.